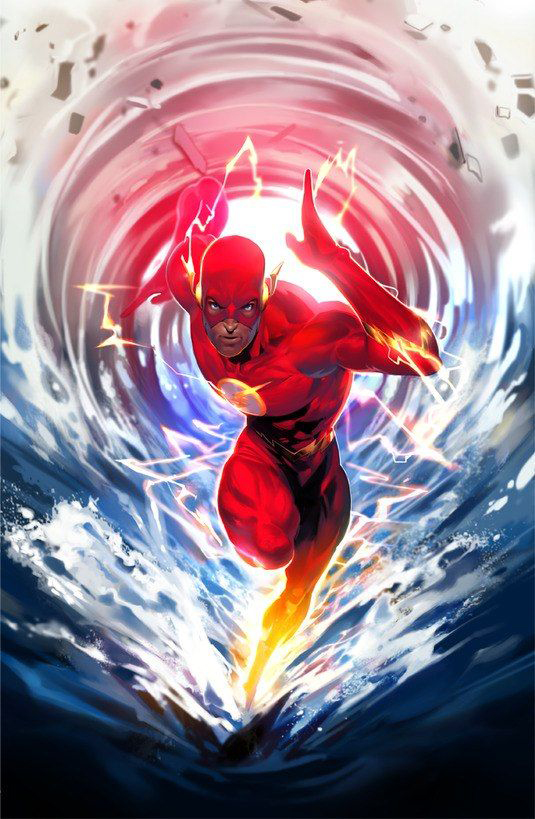 Last week, I saw a very short vision. I was driving on a flat bridge crossing over a large river. Although I was driving the car, my view was from high up in the air, watching myself driving along with other cars.

When my car was about half way across the bridge, moving from my right to my left, on the other side of the bridge a very large red superhero character came flying up out of the water moving very fast toward the bridge. I would estimate he was at least 100 feet tall and all red, like The Flash. He flew up over the bridge and turned to his right, so he was flying in the same direction as my car. He seemed to be flying directly above my car. End of vision.

Interpretation:
Jim Reeve, author of The Handbook of Prophetic Trading, provided much needed help with this interpretation.

We believe the vision reveals upcoming movements in the equities market because it is the only market I am currently trading. Red and water are both symbolic of financial downturns, but driving over the water on a bridge without getting wet symbolizes successfully trading the move. So this was a positive thing for me because I was positioned properly for it.

Getting half way across the bridge before the superhero came flying up out of the water shows the downturn will initially move slower before suddenly accelerating. The giant size of the superhero indicates this will not be an ordinary move, but a significant one. He flew in the same direction as my car, which indicates I am properly aligned for this move with a short position.

There were no dates given, so I can only speculate about the timing. This might be the downturn we at Z3 have called the second hangman, which is based on a dream received by Jim Reeve. We have been waiting for several months for this drop.

I am also watching to see a certain ETF, called UVXY, increase up to $25.00 because I saw that in a vision on September 15 2016. Based on what I saw, I believe that will be the best price to sell it because it will be reversing back down afterwards. UVXY is currently trading for about $15.50, so a move up to $25.00 would be a 61% increase.

I was not shown any prices in the superhero vision, but I don’t expect the market downturn to be severe or long lasting because just a couple of days later, I saw a green 868 on October 14, which I believe represents a move up in Dow points. Depending on how far the market drops, an 868-point move up could be enough to move the Dow to new all-time highs. So I am expecting to see a sharp drop followed by a strong rally afterwards, which would then set up an even bigger drop, which we have been calling the third hangman.

As always, this is not a recommendation for investing, but is being shared for prayerful consideration about what to do with it.

I was wondering if there were any timing clues in this revelation. One thought was that the bridge represents the span of time between the election and inauguration. When you are driving on a bridge, you have left one body of land behind, but you have not yet reached the other body of land yet. With the election, we have turned from the previous administration and are looking to the next administration even though Trump will not be inaugurated until January. The span of time begins at November 8th, 2016 and ends at January 20th, 2017. In the revelation, it was noted that James’ car was halfway across the bridge. It was at this moment that the red superhero appeared. The halfway point between the election and inauguration is December 14th/15th. Those days correspond to the 14th and 15th of Kislev. The 14th is the date for the birth and death of Jacob’s son Reuben. The tribe of Reuben is represented on the High Preist’s ephod with the stone that is simply named “red”. It could be an affirmation of the red superhero. The 15th is known for the date that the Greeks set up a pagan altar in the Temple. Just a thought that came up in trying to discern timing. Pray about it before trading.

The birth and death of Reuben mentioned above may be an appropriate day for a flash crash in the market. The prophetic word given to Reuben sounds eerily applicable to the US. “Reuben, you are my firstborn, my might, the first sign of my strength, excelling in honor, excelling in power. Turbulent as the waters, you will no longer excel, for you went up onto your father’s bed, onto my couch and defiled it” (Genesis 49:3–4).

Those are the dates for the fed meeting. Maybe the raising of rates will plunge the markets.

Thanks John! I hadn’t been tracking the Fed and when it meets. I had given up on them raising rates, but maybe they will this time. It certainly had an effect on the market last year.

Next Monday Let there be a sudden stock market crash.

Let there be another Black Monday & Black Tuesday

Be encouraged! God is in complete control and His plan is working even at this moment. I continue to pray for those on this site with a desire/burden for a Joseph mantle…..that our Father gives you peace, clear direction and that He encourages all with a soon release so that our accounts begin the turnaround!

Blessings to all here who remain faithful in His purpose for each of us, knowing that all will work out for our good and make us ever more like Christ.

Charles…if you are still reading this site, know that you are also in my prayers.

Now there are protests and riots. How do we pray against these?

The first priority is to repent from our own sins and walk uprightly before God because righteousness exalts a nation. After doing that, we can pray in the spirit and with understanding as the Holy Spirit leads us to pray. We can pray for the peace of God to reign over our land and bind the demonic spirits of division and strife and command them to leave our nation.

Wow, Dow Futures were down -800 Points last night and now the markets are soaring. If that isn’t a whipsaw, I don’t know what is. Is this the Blow-Off Top?

It was an amazing night in the futures market. I believe today is all about hosing everyone who went short last night. Once the selling panic is over and the bears are spent, then the market is going to drop like a rock. I believe we are close.

Anyone hearing anything? Was that it with no opportunity to profit? I can’ t believe that

Hi Mike K
That same thought crossed my mind, but I find it hard to believe that the Lord will get our hopes up for nothing. Many of us don’t trade futures. We are still in the Trump election timeframe.

I think I remember you seeing a series of price numbers for UVXY that got below $10. Is this correct, and do you recall the numbers? Thanks.

What is the significance of those numbers Phanuel?

Sorry Michael M
I just saw this comment. They are “turning point” signals.

I appreciate the info. With the close of UVXY at 6.73 today, it sure looks like it could go below 6.61 sometime soon. I am seeking the Lord about if it is now time to buy UVXY or FAZ. Thanks.

Hi Mike J
I believe we went below 6.61 (6.57) today. Hopefully that’s the end of the pain, since all the FAZ and UVXY numbers revealed have come to pass. Please stay away from UVXY, unless you get a good green light from the Lord.

If the Lord has been working on you these last few years and if you feel that he blessed you way beyond what you deserve then please take the following verses to prayer:

I am going completely by Faith on this. I am looking for 9-10 men to connect with. Must be a man and it is my understanding that the Lord has been working on you lately. I don’t know even half the answers but once I get 9-10 men who feel a calling we will go from there.

Is the hangman over already? FAZ still hasn’t reached 46.56.

It has not started yet, but I believe we are close.

Long weekend. Get everyone long, feeling like the danger is past. Bam, the hammer falls.

They got to be luring the longs in