You are here: Home » Babylon » 1st Beast » I Saw a Beast Rise Up Out of the Sea
Share this post: 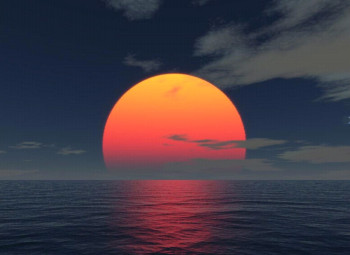 I was walking on what seemed to be near a high steep cliff. It was dark, but I wasn’t sure if it was early morning or night. As I was walking across a hilly place, I saw a little light coming as a streak over the grass.

I noticed a pattern barely discernible in the tall grass. I stood there and realized it was like an arrowhead shape pointing in the direction beyond the cliff, so I looked in that direction across the ocean. As I was looking, at that instant, I saw something moving upward from the sea. It looked like a pyramid.

The sun was coming up at the same time this pyramid was coming up from the sea. It was a cold steely black stone. Through the middle of it was something like a shaft that went up from the base all the way to the point. The rays of the sun came right up inside the shaft from the water until it came to the top where it stopped. This sun did not lighten the sky, but was only giving light over the structure, which reflected in the water, sort of an eery light in the dark.

It should have been day time, yet it still looked like night. This was startling to me.

Then I realized I was on the west coast looking out over the sea with the sun rising in the west. That was so disorienting that I wondered did we have a pole shift? Did the world flip over? Why would the sun rise in the west? Then I woke up.

Later, I learned the Muslims believe the Mahdi (sun) will rise in the west, and will bring The Judgment. They believe he will do the same things the Bible reveals will be done by the antichrist, but they believe he will be sent from God.

re: I Saw a Beast Rise Up Out of the Sea
Your dream references the Goat in Daniel 8

5 And as I was considering, behold, an he goat came from the west on the face of the whole earth, and touched not the ground: and the goat had a notable horn between his eyes.

All Praise, Honor, and Glory to the Father, the Son, and the Holy Spirit

JM, I had an experience in my life that had me on my knees for a long time. A gospel singer in street ministry called me for prayer about something going in the home she was renting. I had gone through a long season of having to stop everything and listen for the Lord. My friend couldn’t reach me by phone, I had it disconnected, so she wrote. I began to pray and seek the Lord. After 3 days, the Lord spoke to me and said this: A broken bone, given time to heal, is stronger than before. I then proceeded to her home and met up with others that I did not know, to pray over the house. This house was a place that she needed to leave, quickly. She got some strength back and soon got a revelation, and left. All of that to say this. I was really not sure if I had the strength, or courage to commit to what she needed, I got the release and did what the Lord had me to do. In the doing, I learned this: A little lamb that has not learned the voice of the Shepherd often goes astray, yet in love the Shepherd breaks it’s leg, then carries the lamb on his shoulders until it is healed. After that, the lamb never strays far from the Shepherd again.
Praise the Lord for chastisement.

“The Mahdi” and “the Anti-Christ” are one and the same and that is the individual currently residing in the White House.

Hi weather. Do you have dreams? Sometimes dreams are vivid with details, other times not so much.They come as they do and require the dreamer and those that the dream is given to, to pray, and read scripture, and links, to learn more. My dreams challenge me at times to look here at a scripture, and look here, another one, but at times the message and understanding takes weeks, months or years to incubate. We do need visions and dreams, but more so we need to really read scripture and pray. The Lord is able to bring deeper understanding through the gifts of the spirit, but we can’t be presumptuous, either, and force a meaning prematurely, or even know the timing or circumstances that the dream or vision shows. Some people get dates in their dreams. I have not had that experience, but in a dream everything seems like NOW, because it is in the spirit and the spirit lives in now. I don’t quite understand you thoughts on too vague. I don’t think we can demand more or less than what the Lord gives. I pray that you will be blessed in those gifts that the Lord has given you.

Too much vagueness. LORD WE NEED dreams that are more revealing or were all gonna be stuck in the land od wondering and cone to no real help in our decision makings.

JM, thank you for all your insight. I agree on much of it as I know some of what you speak. You have mentioned water demons, and of course the Bible does also, speaking of Dagon, and Leviathan, Yes?
There is much more to this, indeed. Think of the elements. These are those things that particularly are involved with religious ritual. Think earth, wind, fire and water. These four are major focus for much ritual. You can trace the significance, of course, all through history as it is a necessity, yet from the distant pass, coming forward, is the belief in the powers, or another way to say that is the elementals, which in themselves are spirits. The stochii have to do with ritual summoning of power and movement, tied to earth, wind, fire, and water. A couple of years ago, I did research and study on the 2012 Olympics, another ritual that has grown to the heights of popularity in the main stream, but the significant thing that I want to bring out to address what you have stated about water, rivers, lakes and oceans, is this; from the study on the 2012 and in review, I was compelled by one certain aspect of that ceremony. It was held just above the river Thames, and in the arena there was a duplicate of the curve in the Thames. Upon research I found that there is a juncture there of the Thames and the Isis rivers. It was so striking to me while looking at the images of the games that this particular curve, like what I call a pocket was magnified in placing it again in the stadium. I recognized it as the Nile at the point of Karnak. Take a look at Wiki for the map of the river, and see where the river flows. At that point of the Nile is the Necropolis and other ancient structures above and below. OK, how do the Olympics tie into a river? Well, the Thames is below the stadium, and the merging of another aspect of the Thames is the Isis river. Researching the two names, Thames and Isis, brings the mmeaning of Dark Throne. This led me to a greater understanding of the occult practices, in an esoteric and also physical way to reproduce that unholy trinity of non other than Nimrod, Semaramis, and Tammuz. aka Osiris, Isis, Horus. That same areal view of the ‘pocket’ on the Nile, is also represented in the games of 2012 arena, and above the same in the games. Check out a river flows through it and you will see the same thing. Now, here’s the thing, you mention the water spirits and we know of at least two by name, yet Jesus cast unclean spirit by way of the pigs into the water. Why didn’t he cast them out …just out, because he knew they would seek to enter again. Water is a symbol of many things, including baptism, yet there is something deeply remote and disturbing about the depths of the sea. The Bible speaks of beasts emerging out of the sea, which, I believe, can be a physical and/or metaphorical truth, actually, both. There is another aspect to this which has to do with change. Change is the time or delineation between one thing and another. Think land to ocean. Think midnight as one day to another. Think the ocean lapping as waves to the sand. Think a river and a land mass. Think a mountain and the sky. Think of places that have that kind of change, as in one thing to another. This is the causal part of rituals, to usher in the transformation in elemental magic. It’s mind boggling, to say the least. But once you know, you know that you know. After that is only refinement. I, too, believe there is a connection to Revelation 13. Yes! I have done some research on the Jin in regards to You have not taken away anything, you have confirmed and added much to this. Yet, we also know who created all things, and His name be praised