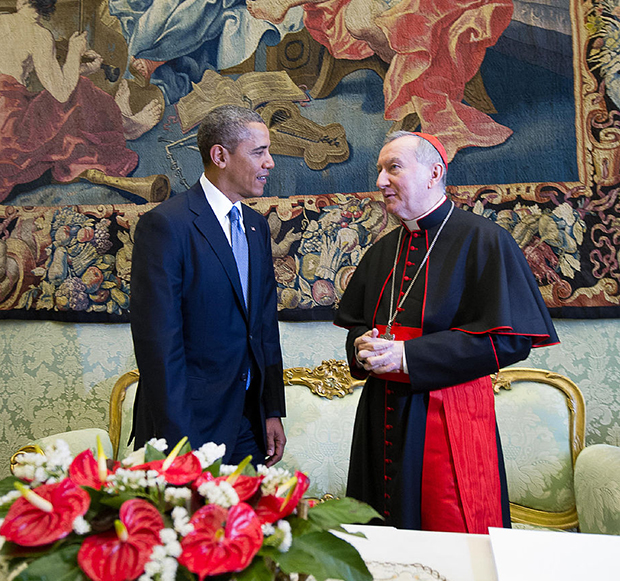 In the 6-minute video shown below, author Tom Horn explains why Pope Francis might not be the one who fulfills St. Malachy’s 878-year-old prophecy, which foretold specific details of each of the final 112 Popes, concluding with Petrus Romanus, which means Peter the Roman, who will be serving as Pope when Rome is destroyed and God judges His people.

Malachy wrote the following prophecy about the 112th Pope.

“In the final persecution of the Holy Roman Church, there will sit Peter the Roman, who will pasture his sheep in many tribulations, and when these things are finished, the city of seven hills will be destroyed, and the dreadful judge will judge his people. The End.” (see the complete post)

“I believe Pope Francis was not canonically elected. I believe some hanky-panky went on in the conclave. In fact, I think that has something to do with why he picked St. Francis of Assisi as his namesake. His real name is Bergoglio, as you know, because Francis of Assisi prophesied about the final Pope and he said he will not be canonically elected. Now that means that he’s a placeholder for reasons that we can’t quite figure out, but I believe he’s either going to be removed from office or he’s going to step down like Benedict did, soon. And the guy that comes up to take his place is actually going to be the real Pope 112 by election, Petrus Romanus.

The Vatican’s current Secretary of State, commonly known as the Cardinal Secretary of State, is Pietro Parolin, shown in the photo above with President Obama. Parolin seems to be a better fit for the title of Peter the Roman than Pope Francis for several reasons.

If Tom Horn is correct about Pope Francis being replaced by Pietro Parolin, and if the final Pope is the second beast identified in Revelation 13, also known as the False Prophet, then it would appear Pope Francis has only been preparing the way for the one who comes after him, which fits two prophecies I posted two years ago. The first one is from Brian Carn:

“Pope Francis will have a health scare, but he will be fine. Pope Francis is being maligned, but he is not the one to worry about…it’s the next Pope that comes into office who will do very dark things. Be very prayerful about this.” (see the complete post)

The second one is from Pastor Benjamin Faircloth of Ignited Church in Lavonia, GA:

“Pope Francis will die and his successor will make way for the rising and appearance of the antichrist and his unholy spirit that shall increase and manifest throughout the earth. I do not know if this is a literal death or him resigning as Pope. I do know out of his own mouth he said he had 2-3 years left before he goes to the Father’s house.” (see the complete post)

Tom Horn has apparently updated his thoughts on who Petrus Romanus is. In March 2013, I belonged to a discussion group belonging to Tom Horn when Jorge Bergoglio was elected pope. As soon as it was announced that he would take the name Francis I, Tom Horn posted “We nailed it!” Lots of people, like myself, wanted to know how he “nailed it” because the background of Bergoglio and the taking of the name Francis in no way indicates that he was Petrus Romanus. The post was removed within days.

I thought for sure back then that Pietro Parolin would ascend to the papacy because of his background and his name, and he’s only 66, so we shall see. And while I’ve had my eye on him for a while now, my heart and my soul keeps looking upward for our Lord’s return.

Pietro Parolin is currently Vatican Secretary of State and a likely candidate to become Pope someday. His name is the Italian translation of Peter and unlike Pope Francis, Pietro is a native Italian, making him a perfect match to become Peter the Roman, Petrus Romanus. Tom Horn wrote a large book on this topic with the same title and I think makes a great case. Also, Pope Francis is currently 83 years old so to me it seems unlikely he is the final pope. I don’t see the fulfillment of Revelation 13 until the 2040’s at the earliest, which would make him at least 103 years old.

April 2019 and Francis is still going strong, so we shall see. Although a few other things still need to happen, so perhaps Francis will continue as a placeholder while those things are being fulfilled – Tarshish needs to break away from Rome/EU in order to oppose the army that invades Israel before the war (still set for 29/03/19 despite all the chaos), ties need to strengthen a bit more between the nations that will jointly attack Israel, and they need to continue to stir up anger between the different groups in western nations to ensure they are too busy dealing with internal issues to be much of a threat when they finally make their move (hence the white vs islamic terrorist attacks now taking place).

I have read articles, Bible codes. by Johnathan Wright Jared K. Trumps son in law in the AC. he the 1 behind the that is working with prime minster N in Isarel
of 2 state there. Jared name shows up in the codes

my understanding is the way Pope Francis has named himself stands for Peter the roman. That how Tom Horn explain it on a ute video
I could be wronge I dont think. so or it was cris Putin tom Horn co author

Tom Horn has identified another man, Pietro Parolin, who will eventually replace Pope Francis. He is currently the Vatican’s Cardinal Secretary of State. His name Pietro is Italian for Peter. He is literally Peter the Roman, the one identified by St. Malachy. He is about 18 years younger than Pope Francis. Tom Horn believes he is far more evil. You can read more about him here:

Mr. Bailey (or others reading this), I am being pressed by some to show them where Dr. Horn predicted in print, prior to the event, that Pope Benedict XVI would resign; and also that the real date of his resignation was in 2012 and not 2013. If you would provide me with references for these two, it would be very helpful. Thank you so much and the best to you.

I think it can be found in his book, Petrus Romanus, but I don’t own the book so I cannot confirm that and don’t have the details.

I hope it all just ends soon

The Secretary of State for the Vatican, Pietro Parolin’s coat of arms has the phrase “quis non separabit a caritate Christi? “What will separate us from the love of Christ?”

Thanks for sharing Peg. He is the one Tom Horn believes will replace Pope Francis as the legitimate, canonically elected, 112th Pope, fulfilling St. Malachy’s prophecy of the final pope.

Google gave me the wrong translation on Pietro Parolin’s coat of arms.I found out it is from Romans 8:35 “WHO shall separate us from the love of Christ?

Do not overlook Canon Law which refers to Papal resignation. Pope Benedict did not meet the points and therefor is STILL the true Pope. not Francis. So the prophecy is still effectual.