You are here: Home » Prophecies » TD Hale: Presidential Limo Flips Over After Death of Important Person
Share this post: 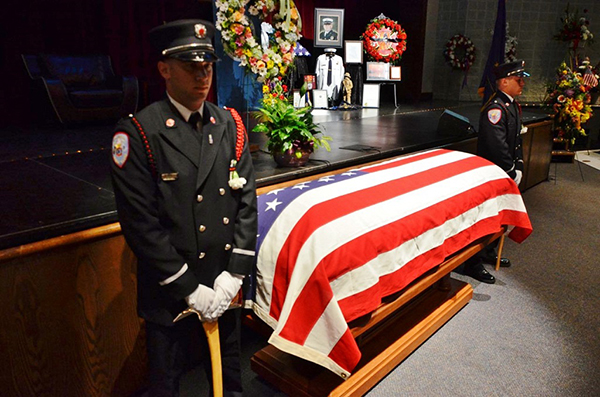 In an interview with Pastor Paul Begley, Pastor TD Hale shared  how God revealed chaos coming to America after the death of an important person. TD Hale is the pastor of Calvary Christian Center in Gallipolis, Ohio.

During this interview, Pastor Hale shared a dream he had about three years ago.

Up in the front of this huge auditorium was a casket, but it was covered in a flag, an American flag. Then over the intercom, a voice came and said, “Remain seated as the President of the United States comes in.”

If the important person who died in this dream was Justice Scalia, we could be entering into a time of chaos very soon. However, Prophet Brian Carn has warned 2016 would be “a year of unusual deaths”, so perhaps another important person will die later this year. Brian Carn gave the following warnings for 2016, which could be related:

“An attack will be attempted, or threaten a Presidential candidate.

July 2016 will infuriate many Americans and by November some will say, ‘I am leaving America.’

Many others have shared warnings of foul play coming during an upcoming presidential election, which I documented in my post, An Attack Worse Than 9/11 is Coming to America, which included this quote from Brian Carn.

“People will lose trust in the voting process. They will deny and doubt America’s political process to vote and acquire leadership. Even Trump, Donald Trump, will confront his fate and stir many to a position or place of rioting. This will cause an upheaval to come because the political game was revealed in this upcoming season, for it shall be historic says the Lord. And Hillary will be found at the end of the day smiling with success as a new war begins. The saying goes, ‘The bigger they are, the harder they fall.’ And this will be Trump’s greatest blunder.”

The warnings of foul play in the Presidential election seem to fit with the Presidential limo flipping over, which might be a warning that the election results will be overturned. President Obama’s limo is called “The Beast,” so it could be the beast entering the auditorium, which refers to the spirit of antichrist. If the flipping of the presidential limo represents overturning the election results, we could see a scenario where Donald Trump wins the election, but is forced to step down while someone else takes office, which would likely divide our nation more than even and possibly ignite violent protests.

In the following video, Pastor Hale shares this dream plus part of another vision he received on December 26 2015 regarding the future of America. He joins the Paul Begley program starting at the 59:00-minute mark. This program was recorded February 23 2016.

As I posted on a different article, I have had vivid visions; (multiple times) of President elect, Donald Trump being pushed in a wheel chair onto a type of stage where an audience was waiting for him to speak. I believe it was his wife pushing this wheel chair. Donald Trump was in the chair.

I believe the prophecy of Mark Taylor. It is spot on! Go to youtube and type “Donald Trump chosen by God to stop the destruction of America.”

“July 2016 will infuriate many Americans ” ..could it be the trial of the officers in the Freddie Gray case and its’ being dropped?

It could be. Many times I have seen the fulfillment of prophetic warnings is not as cataclysmic as we expect, which is why we should be careful not to add our own assumptions.

Tomorrow President Barack Obama arrived in Austin, Texas and speak at SXSW and his limo will pull up to the Austin Long Center. Thoughts?

All we need is the casket!

I laugh but I wish no ill upon no one.

Admiral Fired For Leaking Obama Bought Mansion in Non-Extradition Country
Monday, January 11, 2016 9:35 …a few hours ago after he sent out an “email/posting” revealing that President Barack Obama was in the process of purchasing a multi-million dollar seaside luxury villa in the United Arab Emirates city (UAE) of Dubai. http://beforeitsnews.com/politics/2016/01/admiral-fired-for-leaking-obama-bought-mansion-in-non-extradition-country-2770072.html

I am trying to find the original message by Brian Carn so I don’t use my own words but can’t find it right now regarding Donald Trump. But I remember Brian Carn saying that he saw a vision of a box exploding and when he got next to it, he saw Trumps name in it. He didn’t say what his interpretation was or whether it was literal. Don’t know if it means his campaign will fizzle (go up in flames) or something else. Obviously Brian Carn has said many times that the Lord showed him that Trump won’t be the final candidate but the vision is definitely interesting because of the imagery. I know he has also said March would be another big turning point. If somebody else heard that clip and wants to clarify or add to it, that would be great.

When I heard the announcement that Obama said he would remain in America after his term is up, it was on American Family Radio. I do not recall who was reporting. There was no mention as far as I can recall the reason being his daughter being in her last year of school.

The reason he states staying in D.C. is so his daughter can finish high school. There are many articles on the net regarding this.

A word from The Lord posted today by a Sister in Christ about the election – her blog “I AM is seeking you now”.

THE ELECTION
There stands one who speaks arrogant words. He’s able to feed the flocks, but he shall surely not see the end of his pursuits. For darkness will over take him in his season of victory. He shall not rule, nor sit on a kings throne. In his flight a spark shall consume him. The reason shall be high stakes. Treachery bestows the man of the hour and his season shall come to its final ending.

Thanks for sharing this. It is the first time I have heard a specific word saying this, which sounds like the missing piece of the puzzle. This scenario would make the other words fit together too. Here is the link: http://iamisseeking.blogspot.com

I am curious if thats true…
http://beforeitsnews.com/alternative/2016/03/historical-breaking-news-obama-administration-removed-and-cabal-surrendered-march-7-2016-interim-president-general-joseph-dunford-now-stationed-and-living-at-whitehouse-3315440.html