You are here: Home » Prophecies » Going Into the New Year A Sudden Terror is Going to Hit America
Share this post: 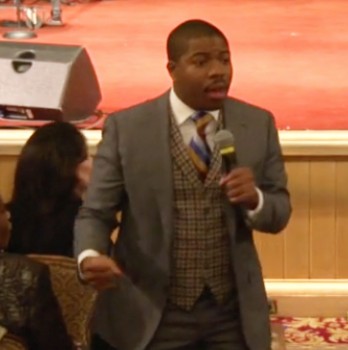 A few days ago, Pastor Benny Hinn conducted a Miracle Service in New York City at the Waldorf Astoria hotel. One of the highlights of the service came when Benny Hinn introduced Brian Carn to minister in the prophetic anointing.

Brian Carn’s message is recorded in this video. At the 8:30 mark he says:

The famine is coming y’all. You may not believe it. You may can’t see it because we live in a country that has everything. We are greedy. We are wasteful. We can’t imagine going to Wal-Mart, going to the grocery store and they not having anything because you have never been there. When you’ve never seen it, you can’t recollect it, you can’t comprehend it. But you have to catch this. With everything that’s happening we’re getting ready to see a major collapse. I prophesied it and I told the people, things that were going to come.

The Lord told me coming into the new year, mark my words. If you saw on my website, I prophesied and told you I saw Jihadi John getting killed before the year is out. It came to pass. The word of the Lord came to me. He said, “Going into the new year, a sudden terror is going to hit America where people are going to weep for days. But he that dwelleth in the secret place of the Most High shall abide under the shadow of the Almighty.” (Source: BennyHinn.org)

The timing of his warning “going into the new year” does not identify the specific month, but it sounds consistent with what I heard regarding a one month delay in the coming economic collapse, which would mean by the end of January. See my previous post, Prophetic Dream Announces One Month Delay.

Brian Carn’s description as “sudden terror” is consistent with how I saw an economic collapse happening very suddenly. He also used the word terror, which might refer to a loss of finances, but could also mean a terrorist attack that deals a blow to our economy similar to what happened on 9/11, 2001.

The good news is while darkness is falling, the light of God is rising on His people. Those who are close to the Lord have nothing to fear even when sudden terror comes upon the world.

5 For in the day of trouble He will conceal me in His tabernacle; in the secret place of His tent He will hide me; He will lift me up on a rock.
6 And now my head will be lifted up above my enemies around me, and I will offer in His tent sacrifices with shouts of joy; I will sing, yes, I will sing praises to the Lord. (Psalm 27:5-6)

1 He who dwells in the shelter of the Most High will abide in the shadow of the Almighty.
2 I will say to the Lord, “My refuge and my fortress, My God, in whom I trust. (Psalm 91:1-2)