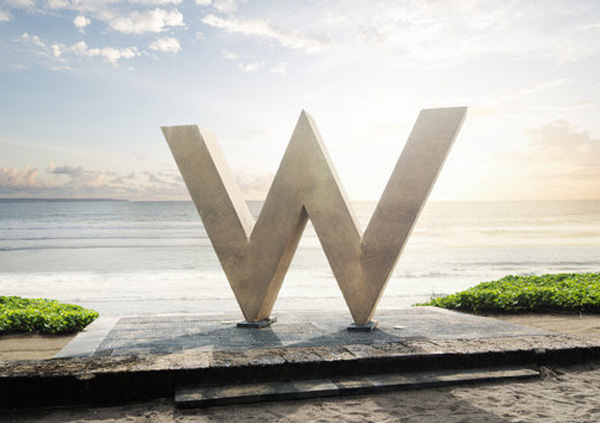 Another confirmation could now be unfolding, letting us know a sudden economic collapse is coming soon. This latest confirmation comes from a pattern in the stock market price movements, which began forming about six months ago.

Just as doctors are able to recognize the signs in a patient who is close to dying, such as the death rattle, technical analysts are able to recognize patterns in the market letting them know a major reversal is coming. In the final months of a long-term bull market, the market often forms a distinct pattern, which is called a triple-top reversal.

The Triple Top Reversal is a bearish reversal pattern typically found on bar charts, line charts and candlestick charts. There are three equal highs followed by a break below support. As major reversal patterns, these patterns usually form over a 3 to 6 month period. (Source: Stockcharts.com)

Here is how Investopedia explains it:

A pattern used in technical analysis to predict the reversal of a prolonged uptrend. This pattern is identified when the price of an asset creates three peaks at nearly the same price level. The bounce off the resistance near the third peak is a clear indication that buying interest is becoming exhausted. It is used by traders to predict the reversal of the uptrend. (Source: Investopedia)

I am not a technical analyst, but I have been tracking signs of a coming sudden economic collapse, which fits the description of a major reversal. So far, I have been shown four signs to watch for to let us know we have entered the season of the collapse. I recently documented the fulfillment of two of the signs in this post, Update and Four Signs for the Coming Economic Collapse. Then a third sign was fulfilled last week when President Obama authorized a spending proposal for $1.2 billion in military defense equipment. See my post, Prophecy Fulfilled: Obama Authorizes $1.2 Billion in Military Defense Equipment. So three of the four signs have been fulfilled and I am still waiting for the fourth, which is increased tensions between the American people.

A triple top reversal pattern began forming six months ago and is still not complete, but it has already formed three of the four legs of the W shape, which is an interesting coincidence because I have seen the fulfillment of three of the four signs I was given.

The value of American stocks, especially those that are included in market indexes, tend to increase along with the demand for U.S. dollars – in other words, they are positively correlated. (Source: Investopedia)

If the triple-top reversal pattern completes it would be another confirmation we have reached the turning point. Completing the final leg will require a stock market rally, which might sound like a contradiction because last week I shared how Obama’s authorization of $1.2 billion in military equipment was a sign to let us know we have reached a turning point in the long-term trend. I believe that, but we should not expect to see the markets turn on a dime because volatility is normal in the stock market. Just as there were many down days during the long-term upward trend, we can expect to see many up days during the downward trend. It rarely moves in a straight line. Long-term trends are easier to see when we step back and look at a 5-year or 10-year graph.

A triple top reversal pattern began forming in August 2015. If the pattern continues, the stock market could be moving up soon, as shown in the red line below. This chart shows the Dow Jones Industrial Average from May 2015 until February 2016. 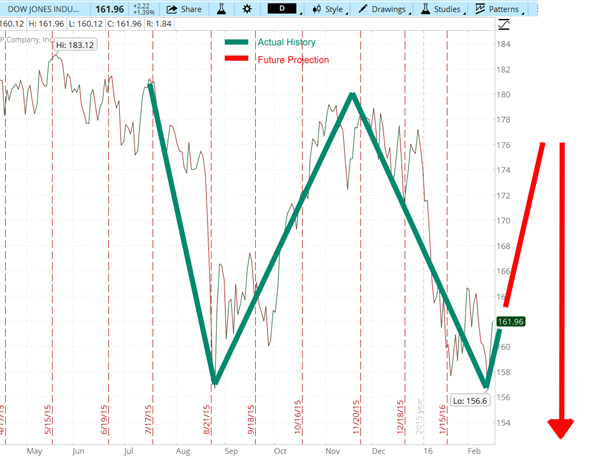 If this pattern completes, we could see the market drop sharply soon after it reaches the top, so this pattern could help us zero in on when we might see the sudden drop.

An experienced technical analyst explained to me today the final leg of the W does not necessarily have to go up as high as the first leg due to the overall declining trend. The red lines shown in this graph would be plenty high enough to qualify as a triple top, and it might not even get that high. We might also see it bounce around near the top for a month or two, just like it did in the middle part of the W. So this is not an exact science, but it can help us see when we are getting close.

Only God knows if this pattern will continue to unfold, but it appears to be well on its’ way. For investors seeking to cash in on the crash, this is something to be watching for and praying about because upward movements in the stock market bring lower prices for inverse ETF’s like FAZ, UVXY, and TVIX. The ideal time to buy inverse ETF’s would be after this pattern has completed. Investors already holding inverse ETF’s should not panic if we see a brief market rally because it would confirm we are close to a major reversal.

© 2016 – 2021, Z3 News. The first 200 words of Z3 News articles may be shared online in exchange for a clickable link to our site. Please include the author name and do not make any changes to text or titles. No image files from our site may be shared because we don’t own them. For permission to use our content in other formats, please contact us.

I remember that, he is better at the stock market predictions that gold and silver

Wish one of his subscribers leaks his stock market turn dates to see if they line up with what we have. Shalom!

its on x22 report

He also said he was 100% sure we would crash last November.

This morning I had a dream. Since this was a Sunday morning dream I’m wondering if something significant may unfold this week in the markets. It also took place by my childhood home so those type of dreams tend to be prophetic. My parents’ home is in a rural country area. A creek is behind their property so to access the road to their home one must cross a bridge. This old wooden bridge is very unique. You have to go down a steep slope to the bridge. Once you cross the short bridge you then go up a steep incline. Almost like the typical roller coaster. To someone who has never driven on it before it can take you by surprise. In my dream I was walking on the bridge, up the incline and then rounded the corner on the road leading to my parents’ home. I was feeling at peace however I sensed activity going on like people were preparing for something. Along the road I saw something like a banner made of large white squares (posterboard or canvas?). On these squares someone had painted writings on them. I couldn’t make out any of the writings except in the middle of this banner was a white square with a large uncompleted “W”. It looked exactly like the “W” in James’ graph above minus the red fourth leg. It was drawn in blue paint. I stopped, picked up the large “W” square and looked at it for little bit. My dream then continued on unrelated to the “W”. Interpretation: I feel the bridge represented the short-lived drop we are expecting soon and then we will see the fourth leg of the W. I also feel the colors (white/blue) were significant. Something I forgot to add is that while many… Read more »

Thanks for this warning Faith. I believe this confirms we will see the final leg of the W, which means the Dow Jones might move up to 17,900, which is about 900 points higher than where it is now. That is the number Rob Perrett saw us reaching in a dream he reveived back in December. A friend of mine who does technical analysis shows we might reach that level by about March 18, which is next Friday.

The formation of this pattern also confirms we have reached the long-term turning point.

James,
John P. Hussman published an article on this very pattern on February 15 in the link below. He pointed it out in the S&P 500 Index and compared the pattern being made now in 2016 to 1929 and 1987. The 2016 pattern looks almost identical to 1929. As you can see from the graphs, if the pattern is true and if it will be the same for 2016, we are currently in mid-air of the very leap off the edge of the cliff!

Any thoughts on buying puts on the SPXL? It’s a 3x Bull of the S&P 500. I was looking at buying deep-in-the-money puts on close months and some out-of-the-money puts for July expiration.

Right now I am watching to see the fulfillment of the prophetic warning given by Ali Winters about a big drop in the financial markets on Tuesday Feb 23. I believe that could take us back down to the bottom of the giant W again, which would then start the climb back up above 17000 to form the final leg of the W. So we might see the market go down then way up then way down.

How do you believe the February 23rd prophetic event given through Ai Winters fits with your dream James? A financial shift in power sounds dramatic. I know you are looking for increased tensions between the people in America before the great crash, but this event seems that it would certainly at least cause a minor crash at best. Maybe the event before the event? If something happens this weekend or Monday that causes any tensions, this could be it. The prophetic poem stated bloodshed before the month of February is over so we are very close to seeing something happen very soon. I appreciate thoughts on any interpretation….

Triple top or not their isn’t one technical indicator that is showing us in a positive environment for equities. All of my indicators on my stockcharts.com account for the SPX are screaming for it to drop below 1500 (conservative estimate) but in the short term there are always inflows of big money to prop it up (look at China it inevitably fails). Folks buying short term put options are going to get squeezed as well as the shorts. It still takes time to play out.

Ali Winters put out a Message late last night….here is an excerpt:

” February 23 will bring a shaking to your nation. The financial sector will see a shift in power. Yes, great calamity. As I have spoken so shall it be upon an unholy nation who sees no shame in the murder of the innocent, the homosexual lifestyle or a myriad of other sins that plague your nation.”

Jim, this goes right along with everything you are saying! Keep watch, my friend!

Thanks for sharing Hope

KWN put out a caution statement today. Basically, they expect the market to continue its rally because the small investors are placing record market shorts in anticipation of a big drop. If the markets are artificially manipulated then why not fleece the public again. This logic (rally) would complete the final upswing of the W and the triple top.