You are here: Home » Babylon » 1st Beast is Obama » Obama Taking Action Against the Strongest of Fortresses
Share this post: 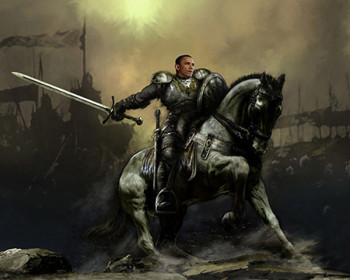 Could it be possible that President Barack Hussein Obama is the one identified in the Bible as the antichrist?

When I first heard someone say that I laughed out loud because it sounded so absurd. Since then, I have studied every scripture I could find regarding the coming antichrist. I made lists of these scriptures and divided them into categories, but I was still not ready to draw any conclusions. So I waited and watched and prayed for months while keeping silent about it. As the months passed I found more and more evidence pointing to Barack Obama as the Biblical antichrist. My confidence has now reached the point where I know it is time to break my silence and share what I have been learning.

Earlier this year when I began this study one of the first things I did was ask the Lord about it. He then showed me a vision in which I saw President Obama riding on a white horse leading armies of soldiers on horses across America. They were riding fast, side by side, forming a long line sweeping across the land with Obama in the center. They were waging war against the American people. As soon as they finished sweeping across one region they turned against another region. They were conquering everywhere they went with little or no resistance. It was an all out war against the American people being fought right here on our own soil.

Then I heard the Lord say, “Was it not written about this one that he would do these things?”

I had no idea what He was talking about. I had started studying the scriptures, but did not recall seeing anything that could explain this vision. So a few days later I looked through the scriptures again and found where it was written by the prophet Daniel. He saw that the antichrist “will take action against the strongest of fortresses with the help of a foreign god” (Daniel 11:39).

What I saw in my vision was the fulfillment of what Daniel saw centuries ago. He saw that at the time of the end the antichrist would take action against the strongest of fortress. Today we are living in the days that Daniel saw. The strongest fortress on earth today is the United States of America. We have the world’s most powerful military and economy. We are widely considered as the world’s sole superpower, at least for now.

When I sought the Lord regarding this topic, He could have steered me in the opposite direction. He could have revealed reasons why Obama was not the antichrist, but instead he showed me where it was written in the Bible what this man would do in these last days. He showed me Daniel 11:39 being fulfilled by Barack Obama.

Even after seeing this vision, I remained silent about it for months because I wanted to be sure. The Bible warns us to be on guard against our enemy because he seeks to devour us. He even uses the scriptures to lead us astray. So we must be careful to discern what comes from the Lord and what could be a trap. I did not want to accuse anyone of being the antichrist unless I was sure. So I continued to study and wait for the Lord to help make this more clear. As I did, more and more evidence was revealed to me. The more I learned the more my confidence grew. It kept coming until I finally became so convinced that I decided it was time to start making these things public. This post only presents the first piece of evidence that I was given, but it is an important piece. There is so much more I want to share, but there is only so much I can do in one post. I would really like to document all of these things in a book, but I don’t have time to do that right now.

For now, here are a few more points to consider.

Daniel saw the antichrist would do these things with the help of a foreign god. I believe the foreign god is a reference to Obama’s allegiance to Islam. He has a long track record of honoring Allah and helping fund, arm, equip, and train Islamic Jihadists around the world. Obama has appointed many Muslims to high ranking positions within his administration, including John Brennan, the CIA director, and others in the Department of Homeland Security. Obama is quoted as saying the sweetest sound he has ever heard is the Muslim call to prayer. I am not going to attempt to document all of his actions in this post, but I have started documenting them and I already have a long list. I look forward to sharing these things in a separate post.

Obviously the horses in my vision were symbolic. Obama is not going to lead a cavalry attack against America. His weapons have been executive orders, law suits, federal agencies, covert operations, and legislation to “fundamentally transform America” into something far different than what our founders established and far worse than most Americans realize. He is taking us where we don’t want to go. He is leading us to destruction.

After receiving his crown in 2008, the antichrist, Barack Obama, went forth conquering and to conquer. He has already caused tremendous destruction throughout the world and in America. I believe his war against America is soon going to intensify and will continue until our nation is destroyed. When he has finished he might have to flee for his life, but the Islamic world will embrace him as a hero, their long awaited Mahdi, who was victorious in destroying the great Satan, which is what they call America. With 1.2 billion Muslims in the world, Obama will have an enormous following, which will propel him to his next crown. Many Muslim leaders are already calling for him to lead a worldwide Islamic caliphate. I believe those calls will only increase in the days ahead.

I look forward to sharing more evidence in future posts. For now the I recommend reading my recent post “Terry Bennett: You Will See 666“. In that post I was able to draw some amazing conclusions by examining Terry Bennett’s revelations in the context of the scriptures. Those conclusions all point to Barack Obama as the antichrist.