You are here: Home » News » Political News » FBI Insider: “We are entering a time of political purge” 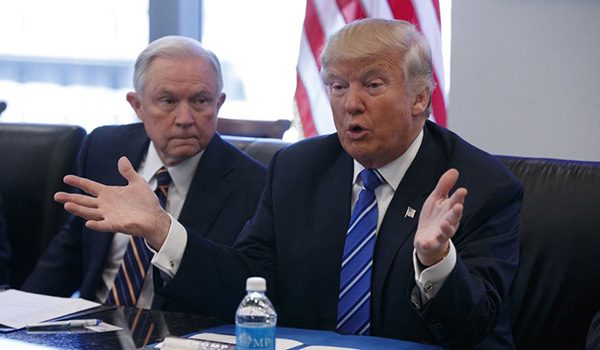 An interview with an anonymous FBI insider was posted today on a blog site, Victurus Libertas. The agent claims to know about a political purge coming this spring on a scale we have not seen before.

Here are some quotes from the interview:

“In the words of the Carpenters, ‘It’s only just begun.’

We expected high level arrests to happen weeks ago, but discovered the bee keepers had interfered at the highest levels. There is an internal war within our government, as many know. The Shadow State is like a vampire facing dawn. They do not go easily into sunlit areas.” (See the complete report)

The anonymous FBI agent then added the following comments:

“The Israeli’s bugged Trump because they were concerned about Bannon, America First, the possibility that with a Trump win, they would see their foreign aid cut, which by the way, is going to happen.

We are entering a time of political purge – the likes of which has not been seen for decades, if not centuries. Trump has the evidence he needs to launch an investigation into a myriad of DC collusions. He must concentrate on the communications between Lynch, Bill Clinton, Obama, and Brennan. He needs to get serious with the pedophilia investigation because he can bring down his enemies in one fell swoop. McCain, Graham, Obama, Bill Clinton, and so on… His greatest tools include the Wiener file titled “Life Insurance“. (Names, dates, photo’s, videos) and the Epstein videos captured by NSA when they were being delivered to Israeli intel, Wiener and Epstein. But, his greatest tool is the collective rage of the People. Trump must prosecute #PedoGate. The relationship between Schumer and Wiener must be explored. It may lead to some stunning climaxes, if you can excuse the pun.

As I said before, there is enough underbelly rot to collapse not only our Government, but collapse the Likud part in Israel and expose a huge political pedophile ring that exists in the US, UK, Asia, etc. All inter-connected. And that’s not even venturing into the extortion aspect.” (See the complete report)

The news media has done everything they can to discredit the pedophilia story, but I believe it because I have seen photos of former President Bill Clinton along with Hollywood celebrities on board the Lolita Express, flying to the private island owned by billionaire Jeffrey Epstein, but the pedophilia goes far deeper and involves far more people.

The deep state uses those horrible crimes to blackmail our leaders, which gives them a way to control their votes and rulings. They are now desperately trying to stop Trump’s investigations, led by Attorney General Jeff Sessions, but I believe they will not be able to stop it because God is in it. I believe it is one of the main reasons why He raised up Donald Trump. He is using Trump to bring justice to our land, making the high places low and lifting up the low places, which in this case are sexually abused children. Then the glory of God will manifest like we have not seen before.

So there is good news in the midst of the bad news. I believe we are getting close to the greatest revival ever, leading up to the return of the Lord, as seen by the prophet Isaiah.

3 A voice is calling, “Clear the way for the Lord in the wilderness;
make smooth in the desert a highway for our God.
4 “Let every valley be lifted up, and every mountain and hill be made low; and let the rough ground become a plain, and the rugged terrain a broad valley;
5 Then the glory of the Lord will be revealed, and all flesh will see it together; for the mouth of the Lord has spoken.” (Isaiah 40:3-5)

Father expose all the rats.

Father, in accordance with Your word, that “…there is nothing hidden that will not be exposed, and nothing concealed that will not be made known and brought out into the open.” use our President Donald Trump and his administration to expose and prosecute those who abuse and prey on little children… in the blessed name of Your only begotten son, Jesus, who said, “If anyone causes one of these little ones–those who believe in me–to stumble, it would be better for them to have a large millstone hung around their neck and to be drowned in the depths of the sea.” Amen.

Amen. I stand with you Don in prayer with fasting- Lord of heaven and earth who hears the cries of the helpless rise up as THEIR DELIVERER in this hour. No matter who tries to stand in your way O Lord of Hosts, move them aside. Rise up with a strong arm to uncover the deeds of darkness done in secret. Publicly and irrevocably we ask you Lord Almighty to take down this ring of sin. And we humbly cry out to to you for a mighty work among many victims, HEAL SCORES OF CHILDREN -AND NOW ADULTS- who have been harmed by pedophiles. In the name of Jesus. Amen

A. That pun was hilarious and true.

B. I believe they sickos will be exposed, to the highest levels.

C. I think Obama knows he could be exposed in this, so he is currently running an operation not only to bring down Trump, but to clear his name, and come out clean in this whole ordeal.

D. I do believe this will be Julian Assange’s biggest exposure yet. There are still files from last fall he published, and people were warned not to open them, unless you wanted to risk losing your life. I don’t know of anyone who has opened them up yet and made it know to the public.

E. I think they are having this spring uprising to counteract The President’s uprising, that might happen in spring.

F. This was a very good and informative article.

This lines up with what Cindy Jacobs prophesied for this year in the USA: https://www.generals.org/articles/single/word-of-the-lord-for-2017/

Interesting how Cindy talks about the importance of the number 17. I did not see her mention… I could have missed it that Trump was the 17th man standing when all was said and done. Hmmm.

Oh God, the creator of whole universe, please please please have great great great mercies to the coming judgment to America. In the name of Jesus, Amen. Brothers and Sisters in Christ in US, please read carefully to the following detailed judgment information contained in http://www.staffandswordministry.com/uploads/Walking_part4.pdf,
and make good preparations.

This is indeed vast and severe. Do they have a current ministry?

Yes, they have a site and I am wide eyed reading the judgments Here’s a taste:
“Yes, thy very flesh is My temple. How do you abide with and invite foul abominations to dwell there in My temple, and by these foul demons so do abuse defile and abase My sacred places, My holy places, that the world becomes a foul odor, a sacrilege before the hosts of heaven?”

Do we even dare ask for mercy?

This is enough to make me want to fast for days and days and never give up. We have so sinned to the very dregs of hell itself. There are pages and pages of words that the Lord gave to Chuck on their site. This quote came from here:
http://www.staffandswordministry.com/uploads/Famine_Message_part3.pdf

If this series of judgments is true then the great harvest will only come out of terrible destruction. Talk of America once again being a great nation or a recovery is a pipe dream. God surely will have removed His protecting hand from this once great nation. It is too much to take in without despairing of our lives and the lives of children too. I believe it is a true outline of our future to come. God have mercy as you pour out your wrath and remember your own that love your appearance!

Didn’t Rick Joyner write a book 20 years ago about civil war in the church, Blues vs. Greys?

Very good post James. I pray for all those abused children and await the greatest revival ever!

James, did you notice your article was posted at 3:33 PM? On Trunews tonight Rick Wiles was back from Europe in good form reporting that 1500 pedophilia arrests have been made since Trump’s inauguration of which little has been reported but this low profile approach should yield a harvest of leads that could, hopefully, bring down the whole crooked establishment. Rick said the long list of names of American citizens as well as heads of state that Obama has spied on supports the credibility of the charges that the president has made against Obama’s spying on the current president.