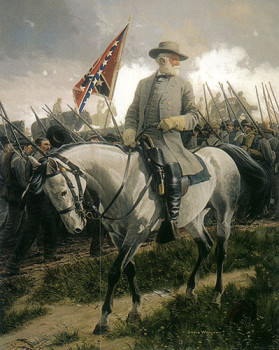 I had a dream that my husband and I were downtown on the streets of Atlanta walking with our children and a large group of people on the sidewalk behind us. I noticed there were troops lining up on the sidewalk on the opposite side of the street. They were dressed in old fashioned uniforms that resembled civil war veterans. They looked like they were lining up to prepare for a coming battle.

Suddenly, I saw three men on horses riding through in the middle of the street. One horse in front leading, and two directly behind on the left and right side of the first horse, almost making a triangle shape. The man on the leading horse was Robert E. Lee, the general who led the Confederate troops during the civil war.

I asked someone, “Is that the real Robert E. Lee?”

They said yes. I did the math in my head and thought he had to be too old, but they insisted that he was the real Robert E. Lee.

Then he gave a command to his troops. They were getting ready to test their weapons before the war. They instructed us to go across the street to sit down while they launched their missiles toward us. I immediately knew we needed to get out of there! As we began to move and lead people away, I woke up.

Interpretation:
I believe this dream reveals a coming division in our nation, which may also include some racial tension. I considered the dream and asked the Lord for the interpretation. I believe the three horsemen represented three powerful disruptions in the US Political, Economic, and Geophysical arenas that are approaching our cities. I didn’t get revelation as to which power was represented by the leading horse that General Lee was riding. However, it might represent political leaders who are leading the way to destruction.

Eventually all three powers will be involved in the judgment that is to come. Historically, the fall of the city of Atlanta during the American Civil War was a critical turning point, which led to Confederate soldiers surrendering soon afterwards. I pray that just as Atlanta was brought to its knees and eventually surrendered, America too will be brought to its’ knees and surrender to the unity of the spirit and repent and turn to God.

Atlanta is also known as the “Gate City of the South” and the “Bible Belt”. I believe this is also a reminder that judgment begins at the gates! It begins with the house of God (I Peter 4:17) who have invited the crisis and calamity to this nation through her own abominable sin and compromise.

In June 2015, the Lord reminded me of this dream and showed me the confederate soldiers were preparing for the coming battle and were getting ready to test their weapons before the war. I couldn’t help but think of Jade Helm 15, which involves our soldiers testing and preparing on our city streets for the crisis that is to come to America. The real Robert E. Lee is coming. The very real division and devastation that was brought upon our land in the 1860’s will return to America once again if she doesn’t repent and turn to the God of her salvation.

The south will rise again and save a lot of what’s left of the real America. The new flag will be The Confederate Flag in an enlarged version of The CSA. The CSA will put a stop to geo engineering along with many other things. Move to the south and stock up if you haven’t already. See; Leagueofthesouth.com, Vdare.com, and Southernationalcongress.org

Nah, that won’t happen. The south will be hit as hard as anywhere else. You need to let go of your movie fantasies, Josey. Satan and evil authorities are who we fight, not each other. If you join in, you will be judged.

In 2006 I was visiting some model homes. I felt led to walk out to the end of the bluff and see what was there. I did and found that there was new construction going on. Around the site were several flags of different colors to mark the site. I was sort of wondering why I felt the need to walk out there to see that, and when I turned to walk back I had a mini revelation that the flag would change. I didn’t know what flag, but I thought it was the American flag. I didn’t know if it would be replaced, or have a subtle change to it. These days I am wondering if the flag will even stand at all as it becomes an offense and politically incorrect.

Wow…interesting dream….and insightful interpretation. I had a vision in August 2013 that likewise has a “Civil War” atmosphere to it. I’ll try to make it brief…It was an afternoon in August 2013 and I was reading the Bible. I felt the need to stop for a moment and pray for the PRESERVATION of our country! So, I did. And as God often does when I pray, He gave me a “picture” or “vision”.
The vision was short in duration but so full in body, in significance. The vision was of an American civil war soldier standing in a cemetery. The cemetery setting included large, tall, green trees that shaded much of the cemetery, lots of green grass, and the day was bright and sunny. But the soldier was completely CHARRED!!! He and his uniform completely charred from FIRE and yet he lived, and moved just as he had normally. Just behind him, to his right, was a tall, stone, gray-colored tombstone; almost as tall as he was, with a curved top. Directly before him, was a woman who was dressed in a lovely, 1800’s fluffy dress. She was not harmed in the least. And the soldier held his hat in his hands, slowly raising it to the level of his chest. When God gave this image or picture to me, it shocked me to see the soldier so completely charred! I gasped and opened my eyes!
Possible interpretation:
I’m wondering whether the Lord may give anyone some insight into this very vivid and disturbing vision?
Unfortunately, my interpretation is not so promising…yet does have a “new beginning” at the end. I think perhaps the vision represents civil war…another one…between the people and the forces the government is presently training to keep the American people “in line”. The soldier was completely charred yet survives…and the tombstone behind him is almost as tall as he is. Since he represents the American people, and the tombstone is almost as tall as he is, either 1). nearly 90 % of the American population will be wiped out (if the soldier represents the American people and the tombstone represents the percentage of American deaths…comparison made between the heights of the soldier and tombstone) OR 2). nearly half the population will be wiped out (if both the tombstone and the soldier represent the American population, the half that lives and the nearly half that dies.) The ambiance of sunny day, green grass and tall, shady trees, YET in a cemetery, could symbolize America survives herself…yet is not as strong as she once was, before her government turned on her. The well dressed woman represents HOPE for a brighter future after the end of the treasonous attack from within. 🙂 Not sure on the interpretation…just speculating. But whatever it represents, it could be that America suffers great loss of life; between 50-90% of her population. But she survives.
And there was ONE MORE THING God gave to me with that vision…it was just a single word; “SHAKING”….I’m not sure if this refers to a physical shaking such as an earthquake or if it is a metaphorical shaking such as the “shaking” of our economy.

Anywho, I’m sorry this is rather long…but I think many of God’s kids are having similar dreams that portend of a coming calamity to this country. Thank you for the opportunity to post this.

I think the lady in the vision is Liberty. True liberty will be restored, at great cost. It will be a better quality of liberty than before – thus not a statue, but a real woman in the vision.

Shaking in every way, earthquakes in all spheres, including geophysical, etc. Charred from radiation (nukes) and the lady is the Lord’s people who survive. Have food for one year minimum (that won’t be enough).

Bringing back General Lee would raise the moral of The Confederacy. It’s a patriotic giant now being woken up.

I said this about 25 years ago and was scoffed at. And here it is.

Could that have been the “actual real” Robert E. Lee ? Yes !!! THEY have had the high tech to re – constitute a human with just their DNA … just like in Jurassic Park !!! Perhaps THEY think they’re clever re – constituting him, ( and who knows who else ???, ) but MAYBE … MAYBE … it’s Gods will and THEY unknowingly carrying out His will ??? Or, CARRIED OUT His will … as the new re – booted Mr. Lee would have to be of a certain age, ( over 50, ) by now to lead an army. Makes ya think huh ?

If you were a group of “purged” ( or otherwise, ) high ranking “Christian” military / intelligence commanders that wanted to save what’s left of the real America what would you do ? Answer : Re – boot The Confederate States Of America. Say … an enlarged 15 state version, or so ? If you were a white Christian patriot who’s had it up to here with black mob attacks, knock out game attacks, media bias, muslims and other 3rd world shoe lickers being forced down your throat, ( and welcomed by scummy mayors like in Atlanta, ( see Drudgereport 6-20, ) ( also see : Vdare.com, ) and your once great country be hijacked by a handful of Satanists, what would you do ? If you were God and you were about to dish out some judgments but wanted to separate A LOT OF Christians from what’s coming … what would you do ? Yes … you’ld re – boot the south. There will be a Civil War II and the south will win. If I were a good Christian person of color, like the lady who wrote this article, I’d move north … just to be safe. We’re all part of Gods church … but until Jesus presides over the earth in the millennium kingdom … we’re not going to, “all just get along.”

Patriotism will be your undoing and is ultimately an idol. I highly encourage you to let go of that idol and repent. This world is passing, there is no reason to hold onto something that will be destroyed and succeeded by the greatest country, the Kingdom of God. If you truly love Jesus Christ, remember your citizenship is no longer of earth but of His nation, his kingdom.

Whatever glory you see in the South is like wind, here one second and gone the next. Focus on the glory of Jesus Christ. Your allegiance is not to a temporary nation but to God. Do not trust in the arm of men but trust in the swift power and mercy of God.

Peggy A.
Reply to  SeanC

Sean,
Very well said. God is not an American.

Thanks! I am posting it now.

And “wonderful” mainstream media have been discussing the confederate flag after the Charleston massacre.
Shalom