You are here: Home » Prophecies » “I witnessed in total amazement the entire sky burning with fire.” 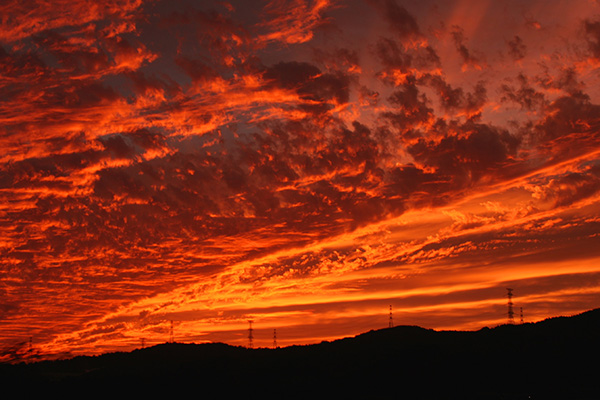 On April 10 2011, I dreamed I was looking up at the sky. It was filled with large, high, thunderstorm type clouds. There were areas that were gray, and darker gray. I could see flashes of orange lightning within them and I heard peals of thunder. I watched as an enormous tree trunk made its appearance as the clouds swirled out of its way. I could see the bottom of the trunk. It looked like it covered the whole sky above the Earth.

While I stared in amazement at this sight, I started seeing roots growing out from the bottom. They were a light color, smooth, and they looked beautiful as they were spreading out going around the whole earth. Shortly after the beautiful roots took off, dark, gnarly, ugly roots come out of the same trunk bottom. They were moving fast behind the good roots and they were also circling the whole earth.

As both types of roots spread out, they began to cross each other and entangle one another. They seemed to be competing on who could go the fastest. Soon though, they gnarled themselves all around the earth and connected with each other. It was a snagged mess of roots covering the entire earth, so I couldn’t see the planets beauty anymore.

I thought to myself, “What a tangled web we weave.”

How curious are the words we choose.

Suddenly, I saw flashes of orange lightning behind the dark clouds and I heard more peals of thunder, which snapped my attention back to the tree trunk. Then a mighty male voice spoke only this, “MANS’ KNOWLEDGE IS FOOLISHNESS TO GOD!”

As soon as those words were spoken, I witnessed in total amazement the entire sky burning with fire, and with that, the mighty tree trunk was also burning. It left me astonished.

I believe the burning sky could be a warning of either an EMP attack or a solar flare. The burning tree roots seem pretty straightforward; mankind’s electronic Tower of Babel is going down. The Tree of Knowledge will be destroyed. The Internet and all that it entails has become the tool for the Prince of the Air to do so much damage, so it needs purging.

Diane Boneck started having prophetic and political dreams the day Barack Obama was elected President of the United States. She believes we are in the end times, when God’s judgment will come upon our unrepentant nation and the world. The Lord has shown her the Muslim refugee crisis is a Trojan horse and a checkmate move by the evil ones. They will rise up when they hear the signal from their leader. He has also shown her where her family should live and how to be more self reliant.

Your dream reminds me of the “ubiquitous membrane” that I’ve heard Rick Wiles talk about on TruNews.com. It also reminds me of the parable of the sower where the seed that fell among thorns got entangled in the cares of this world. I agree that the roots and trunk could apply to the Internet, which started for educational and communication purposes, but has been contaminated by Big Brother, hackers, pornography, etc… Although the Word of God is preached and taught on the worldwide web, so has filth that is contrary to all that is holy. The prince, the power of the air, has infiltrated the net to such an extent that unless someone has made a covenant with their eyes to not look upon that which is evil, eventually even those with good intentions will get caught up in seeing things they shouldn’t and a gradual shift to acceptance of that which is evil is made. Since most people are too weak to turn from their wicked ways, perhaps a purging of the internet is in order. What we need is repentance! Our sins have us moving in a direction away from God. But repentance causes a 180 degree turn away from sin and toward God. He is holy and He requires holiness (being set apart). This world has so many distractions, so we need His Holy Spirit to guide us into all Truth and to keep us from straying when use the world’s devices such as the internet.

I have seen very many prophecies about this “burning sky” phenomenon, which seem to indicate that this will be an actual atmospheric event, not symbolic. I have gathered from the contexts of these prophecies that the source of this would be the Earths magnetic field reversal. We know this has happened many times in the Earths past, but we have never witnessed it. The implication is that during the reversal, there will be periods when there will be no magnetic field at all, and therefore the solar wind and CMEs will impact Earths thick atmosphere directly, without our usual magnetic buffer. We have never witnessed such an situation, and it could very well produce the “fire in the sky” phenomena. This will indeed be shocking and terrifying for us on the surface, and likely cause an “end of the world” mania. Read these prophecies carefully, and it seems clear that they are forewarning us about a factual event which is coming, presumably in this century sometime, no need to read any spiritual significance into it. But it will do Gods work, because such an event will be very humbling to mans pride in himself, therefore God is highlighting this forecast.

That is a really cool dream!

Diane, I’ve been given the same vision of a place of refuge for God’s people. He has revealed to me a ‘land-use system’ design which I would be willing to share with you if interested. It provides for food, water, shelter and energy when laying out where to place the food forest in relationship to the grassland prairie, for example. Or, how and where to build houses to be self-cooling/heating while conserving the food producing soil.
Shalom, Thomas Nodoubt

I would be interested in that info on land use system
Does it need to be emailed or posted or a link?
Thanks
Ken

Ken, I’ve been creating it on the 30 acre plot as the Spirit revealed to me and recently(the last 3-4 months) He has been letting me know it’s now time to start to release this out to others …
Now, for the hard part, at least for me, is to try to digitize this or to take photos and share it. I can see it clearly and understand it’s conceptualization, but that all came from the HS downloading it in an instant of time. Anyway, it is an easy concept but different from what we’ve been taught to believe in.
Shalom, Thomas

Thanks Thomas, That does sound good. It has taken awhile to get things together for self reliance. We are always interested in more ideas!

Remember the old adage, “red skies in morning….sailor’s warning, red skies at night…..sailor’s delight? Beautiful sunset depicted, God help us if the fire of God’s judgment falls down from the sky upon the earth.

SPOT ON…!!! Dear Diane and that is what will be happening sometime Very Soon as The World Wide Web is struck from space causing a near fatal blow to it…!!! Man in his foolishness has relied heavily on one of Satan’s Key Tools…!
This has been prophesied by Erin Aleshire from: http://sparrowcloud9.com/contact/

Thanks Rebecca, I will check out the link, as I hadn’t heard anyone with a prophecy of the Tree of Knowledge (I feel) burning up. I heard we are overdue for a coronal mass ejection (solar flare)