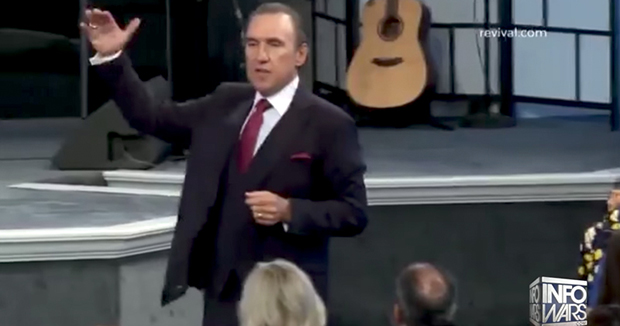 If you don’t think the deep state is watching and listening to everything we’re doing and saying, think again. Pastor Rodney Howard Browne was visited by secret service agents shortly after appearing as a guest on the Alex Jones Infowars program.

Rodney Howard-Browne is founder and President of Revival Ministries International. Two days ago, I shared a post telling how he was warned by a senior ranking U.S. Congressman of a plot to remove President Trump from office. Later, he appeared on the Infowars program, exposing the plot.

“So right after I was on with Alex, they came into my office and they tried to get information from me concerning who the congressman was,” Howard-Browne told Infowars.

“And I said, ‘Look I’ll tell you what he said, but I cannot give you this information.’”

Howard-Browne says he told agents to obtain a subpoena after they attempted to acquire the information from multiple angles. “I said you’re probably going to have to subpoena me, and even then I probably won’t tell you,” the pastor said.

The Florida-based pastor from South Africa said he was wary of who could be trusted within the current administration, but told agents that the congressman would likely have warned Secret Service himself if there was reason for concern. (see the complete story)

When federal government agents show up at our door, we should not assume they’re seeking truth, justice, and the American way. They’re likely to be working for the deep state, like most of Congress and the judicial system. I believe Rodney Howard Browne was wise to refuse to reveal the identity of his source. It’s possible they wanted to send a message, perhaps to make an example out of this Congressman to let others know to keep their mouths shut. It’s far less likely they were there to protect President Trump, in my opinion.

Hi Z3, I know I’ve posted this twice — here, as well as in the comments section under https://z3news.com/w/obama-dividing-america/ — but I can’t stress enough, the urgency of this message! Please take this request to the Lord in prayer.

Synopsis: Good morning, I’m Still reporting on the coup.
We’ve never done this before, but Beth just got in an emergency call to prayer from one of her prayer friends and when she read it to me, we both felt the Holy Spirit move and literally got on our knees to pray for the protection of our President.
The following is from Beth’s friend:
“This morning while out for a early morning run, It was suddenly impressed upon my heart to STOP AND PRAY FOR PRESIDENT TRUMP.”
“As I obeyed the prompting of the Holy Spirit I saw President Donald Trump being shot on a golf course.”
“As you can imagine I was immediately moved to begin to prayer with great fervency and urgency over President Trump.”
“I saw a man holding a high powered rifle standing well camouflaged in a thicket of small trees and bushes, then I heard in the Spirit realm a clear sound of a gun being fired.”
“As I continued to pray I felt lead by the Holy Spirit to share what I saw. I trust that many of you will test and weigh what I have submitted and you will pray as the Spirit leads.
Much Love and Blessings to you ALL.”
[Pray]

Tracy, thank you for sharing, I forwarded to people that will pray! This is urgent, we need to pray for President Trump’s safety and protection all the time but especially this weekend. I pray that all the works of darkness are exposed and removed, permanently! In Jesus’ name! Amen.

Hi Corrine, and may God richly bless you, for forwarding the message to praying people! If there’s any time that Pres. Trump’s life is in danger, it’s definitely while he and his people are at their leisure! (Everyone has their guard down, that kind of thing…) As Christians, we cannot afford to relax our grip — not for a second!

1 I exhort therefore, that, first of all, supplications, prayers, intercessions, and giving of thanks, be made for all men;

2 For kings, and for all that are in authority; that we may lead a quiet and peaceable life in all godliness and honesty.

3 For this is good and acceptable in the sight of God our Saviour;

4 Who will have all men to be saved, and to come unto the knowledge of the truth.

Again, thanks fo your prayers and your faithfulness. Have a blessed morning, afternoon, evening, or night! ?

Tracy, thank you! May the Lord bless you richly as well. Blessings, Corrine

https://www.youtube.com/watch?v=f62cKCBJBxs
HUGE: Imran Awan is In Seth Rich Inquiry – Was With Rich NIGHT BEFORE..

In one article, Howard-Browne is quoted as saying that the Representative that told him this was elected in 1996 and has served in the House ever since.

Someone should ask these two if they were the source. I bet they would deny it.

I think he said it was a Republican. Two were elected in 1996–John McCain and Chuck Grassley. Chuck Grassley is a good guy and is probably the one who warned him.

Video of Rodney Howard-Browne and Rick Wiles, starting at 35:35.

Someone below mentioned the CIA. A few months ago I got curious about the origin of the phrase “conspiracy theory”. It first appeared in print a long time ago–I googled it. I’ve always suspected the globalists invented the term so that they can use it against anyone who gets close to the truth about an individual, or a group. So I also found the origin of conspiracy theorist. You’ll never guess. In April 1967 Attorney Jim Garrison was investigating the assassination of JFK. He wasn’t satisfied with the government’s conclusions—and he suspected CIA involvement, and so the heat was on them I suppose. So they actually coined the phrase “conspiracy theorist” in April, 1967, as a sort of psychological warfare term. If someone was getting too close to the truth—you just call them a conspiracy theorist, which of course evolved into phrases like “conspiracy theory wing- nut case job”–or whatever. It was really a brilliant move. Fifty years later if you want to totally discredit someone as a paranoid, delusional demented possible psychopath—you just call them a conspiracy nut. And then few folks believe them. It really works well today. Forget all the evidence people come up with against the Clintons, or B. O.–it means nothing. Just the incessant ramblings of conspiracy nuts.

We’re truly in a war against the deep state. They are evil incarnate.

Yes, I researched that same term many years ago and found the exact same conclusion. It is so effective that most people who are still ” 9/11 LIARS” ( those who believe the US Government’s utterly ridiculous official LIE about 9/11) don’t even stop to realize that the US Givernment’s official Monstrous Lie about 9/11 is truly a ridiculous CONSPIRACY THEORY, but those of us who are 9/11 Truthers know our unofficial story is CONSPIRACY FACT.

There is a psychological term for this: it’s called “projection” – essentially accusing your enemy of what you yourself are guilty of in order to put your enemy on the defensive.

It is so sad that far too many Americans and especially so-called Christians spend so much time dwelling on the importance of the 2nd Amendment because they don’t understand that the TRUTH – the 1st Amendment – is so much more powerful at destroying the enemies of freedom than the firearm. Imagine a day when 9/11/01 Truth is preached in the pulpits all across America and the world. It’s a great stretch of my faith to wrap my mind around this visualization because the church is full of cowards and propagandized sheep with little if any discernment whatsoever.

Thanks Carl! Projection – absolutely something the liberal leftists are using against anyone who disagrees with them (accusing people intolerant, angry, hypocrite, etc.).

I came across this article about the “Illusory Truth Effect” at http://www.thetruthseeker.co.uk/?p=150517

We probably disagree with the writer about her position concerning the Holocaust, but the 10 steps of Mind Manipulation/Systematic Lies are used by the enemies of Truth.

We must be prepared to stand firm on Truth in days ahead.

Most interesting Ming. There’s only one way people are going to stand firm in the truth in this day and that is by being totally reliant and dependent on the Spirit of Truth. The human mind and spirit can be broken given the right circumstances and conditions, but God’s cannot. We need to yield ourselves to Him completely – as He says, be conformed to the image of His death, because the less of us there is, the more of Him there can be, and that’s our salvation.

Sorry but 2 admenment is there to protect the 1st amendment. I see everyone excerising their 1st and getting jumped and beat on for their free speech. But I bet no one will come at a person like me whose a NRA member and a true gun owner. One day people like you who talk down on us 2A members you will need us. Jesus said and I quote ” sell your cloth and buy you a sword” ! Then when stuff hits the fan and you’ve stocked up for your family survival and don’t have protection your out of luck. If people won’t allow free speech without been violent. Then trust it will come to 2A people defending the ones whose all about the 1st amendment. Our forefathers knew what they were doing.

Agreed, secret service agents….come a knocking on Rodney’s door? Why arent they protecting Trump directly? Isnt that their job? They could have been two Mormons dressed up like “agents” as well. Nothing is as it appears to be anymore, ulterior motives, questionable actions…yes, Hal Lindsay said it best…”Satan is alive and well on planet earth”….and so is the deep state!

Excerpt- Bernard: “…One of the things that I found out… is about secret services; you think they are there to serve and protect a people, country, etc. but they actually turn out to be criminal organizations, to be more precise, the system is heavily so. We are talking about financing wars, creating wars, so basically creating a lot of misery in this world. So lots of conflict. And then I think to myself, if only people knew what the world is really like. Secret services will stop at nothing. Nothing.”

Great quote Ming. Thanks for sharing.

Were God not fully in control of this President’s office and life, I don’t doubt for a moment that he would be ‘taken out’. But God is the One who put him where he is, and He will determine when he leaves. Thank God! If he wasn’t in office right now, God’s people would have a lot – a lot more to complain about, and cry over, than someone who makes some mistakes or doesn’t handle things with the pomp and arrogance people have come to expect. It’s becoming absolutely mandatory that we follow God’s leadings rather than our own likes and dislikes, and the mind of His Spirit rather than what the human mind thinks is reasonable. Excellent info James.