You are here: Home » News » Jesuit Agendas » National Security News » “I Looked Up and Saw Fighter Jets Filling the Skies”
Share this post: 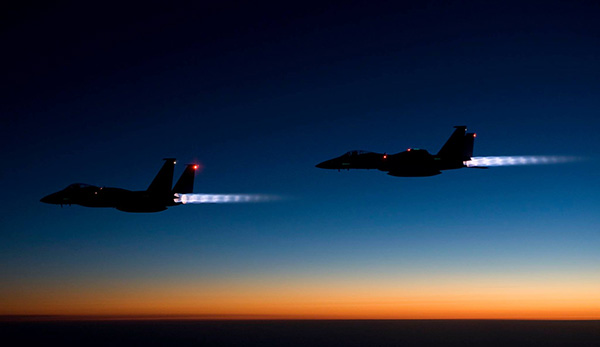 Last night, I dreamed a close friend of mine, who is an airline pilot, escorted me and my family to a very tall high-rise building. We entered the building and went up to a high level. The building had many large glass windows, so we had a stunning view overlooking a huge city, filled with people, residential houses, and businesses.

As we looked at the city below, we suddenly heard a weather report warning of tornados approaching. We looked down upon the city and saw a large tornado forming. As we watched, it grew into a full blown massive tornado. Then there was another and another and yet another!!!

I counted at least 4-5 simultaneous tornados, all massive in size and all wiping out everything in their path. One odd thing was they ran together in one accord and did not get ahead or behind the others. They looked like a working wall of tornados, yet spinning independently of one another.

I knew this city was in huge trouble because it was very flat and the destruction was swift and absolute. Just as I was about to take cover with my family, I suddenly saw very large fireballs coming down from the sky with huge smoke trails behind them. When they hit, they totally burned up everything, almost vaporizing their targets.

Then the power went out in the building, which caused mass panic because there appeared to be nowhere to run and hide from this onslaught of destruction. I ran with my daughter to a corner of the room trying to shield her from the what was coming.

I heard bullets ring out. I’m a Cop, so I know the sound of gunfire. It put holes in the walls behind us. It was that close, yet we were not harmed.

As I covered my daughter, hiding her eyes from watching, I waited for the sounds of destruction to pass. When it finally got quiet, I went down below to see what was happening on the ground.

The landscape was totally destroyed. Buildings were leveled. Dust and smoke filled the air. What had been a hustling, bustling beautiful city just moments prior, was now a desolate ruinous heap.

Everywhere I looked, I saw people running, looking for loved ones, food, protection, and yes, something to defend themselves. I cannot describe with words the stark terror, confusion, and bewildered looks on their faces. One man in particular, well dressed and well groomed previously, was in shock and weeping. He wanted to ask questions, but seemed unable to speak as he staggered around. The panic I saw in the people was beyond anything I’d ever witnessed. It was beyond comprehension.

I walked through the city until I could no longer stand to see the pain. I began making my way back to my own family, but as I did, I looked up and saw fighter jets filling the skies. I could not tell if they were friend or foe because of the smoke, dust, and fog caused by the destruction.

I’ve had many dreams over the years about foreign troops enforcing Martial Law in the U.S.,I have also been shown the troubles with Black Lives Matter-and Antifa in 2012,though I knew it not fully then,at the last part of the 2012 dream,I saw flames falling from the sky,followed by Cloud of Glory on which sat Jesus. Marty Bingham,Houston,Texas God bless you ALL!

Thank you for this very strong dream brother.. we need to always be prayed up and alert 24/7 as we are in the last hour of time!! I do feel this very strongly. thanks again for sharing!! May HIS Truth ring out across the land and bring repentance and purity!..

we are on the brink of war and destruction, sad to say, may we all turn to the Lord Jesus with all our heart mind and souls..

This morning I awoke to the sound of a fighter jet flying over my house. It was so loud in my dream that it woke me up.

I have been getting “ITS TIME TO WAKE UP” dreams lately. Two nights ago I awoke just before midnight, wide away, and then our alarm clock went off at midnight. Neither I nor my wife sets an alarm. I got the message and was up most of the night in prayer, feeling the weight of this historic hour.

We have a guest missionary from Kenya/Uganda with the past few days. He has been here before and was taking roll of his local friends names when he said “I am trying to remember everyone”. This stood out to me like it was in 3D. The Lord was saying in that moment that HE is trying to RE-MEMBER HIS body. To put us together the way that pleases Him!

Also on January 11th I had two people, from two different races, two different generations in two different towns tell quote the same scripture. Then point out the same character and tell me the same lesson from that scripture. It was 2 Sam. 6:9-12, Uzzah was point out to me and the message was concerning rebellion which manifested in presumption and irreverence, costing Uzzah his life. I asked the Lord why he showed me this and he said that there are so many ministries that have built their own carts and have dealt presumptuously with Gods presence that they are going to be destroyed by their own hand (trying to steady what God is shaking apart). God have mercy!

WOW..Very powerful dream! The smoke trails you mentioned in the dream remind me of asteroids and the fire balls that have been falling all over the world. Even the government is now speaking publicly about the possibility of meteor impact.

Psalms ch.46 is a tremendous reassurance to true believers as we are surrounded by such darkness. Never forget what a short puff of vapor this life is. Very shortly this mortal shall put on immortality and this corruptable will be made incorruptable. Strap on all of the armor and prepare to bring in the biggest harvest in history. He that endures until the end will be saved.

I think this message apply here. The depths of evil in our government.
http://www.paulcraigroberts.org/2017/01/05/murdering-the-innocent-in-order-to-support-the-lie-paul-craig-roberts/

Paul Craig Roberts is the best in the secular geo-political realm. He understands the crazy Neocons’ religion of world hegemony.

In all circumstances God/Jesus is our only source of protection. Call on God/Jesus for help in all circumstances and know that he’s going to move the enemy out of your way and save you and your family! Expect miracles! God will protect his people if we call on him to save us. Have faith!

Peggy A.
Reply to  Laura McDowell

Call for mercy in the midst of judgment.