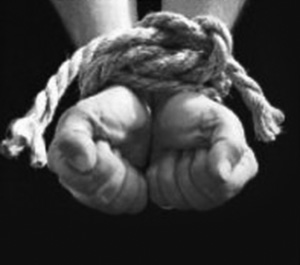 Wednesday as I prayed, I saw a very brief vision in the Spirit of a group of light skinned people being used as slaves. I knew the place it was happening was here in America, and what I saw was horrific.

About a week earlier, after praying many days to receive visions about the end times, I saw a very brief open vision of an infant being cooked rotisserie style over a campfire on a spittle at night, somewhere in a wooded area. It was so awful, I thought surely I must have mistaken what I saw, but I learned long ago that true visions are not forgotten, you can still recall every detail 20 years later if it is truly a vision from the Lord because a vision from Him resides in your spirit, not in your memory. And this one was still more than vivid in my recall.

In this newer vision, a group of lighter skinned men, women and older children were being held in a makeshift cage of sorts. They could stand up in the small space where they were crowded in, but they had almost no clothing on. Their captors were darker skinned and very cruel to them. They were being denied food and other basic needs. I could see they were cold and begging, but they were not being given clothing, although there was clothing there to give them. They were dirty and very afraid. One larger, dark skinned man sat on a makeshift throne type chair built of logs and branches, laughing and ridiculing them. I saw that he controlled the group around him who served him, and he controlled what happened to those in the cage. I also knew that those perpetrating the slavery were other Americans.

I knew I was seeing something I had glimpsed before in less detail – and was what I thought of as “White Slavery.” I knew it was being perpetrated in a time when law enforcement no longer kept order and protected people in our nation. I knew it sprang out of hatred from generations back that had been passed down from the time of slavery when America was a new nation. Satan was taking opportunity through the hearts and souls of those who had refused to forgive.

I wanted to weep at what I saw because I knew in the spirit this was not an isolated incident, but a prevailing condition, and that many had been taken captive in this desperate time.

The scene I saw was in a wooded area, and I could not tell what year I was in or when it will happen. Judging by the foliage, I would say it was summer or thereabouts, and day time, but that was all I could see. The living conditions were very primitive. I felt the grid had gone down and people were just living however they could and that scavenging for food was a full-time pursuit of those who were left in the land because there was just no food of any kind anywhere.

The people in the cage were being held by a gang of thug types of darker skin color. I could feel that the people being held were being treated very cruelly, being made to bow and serve, but more than that, being made to beg for their lives and the lives of their loved ones, and then being ridiculed and whipped to death, for no reason other than the entertainment of those who were stronger and controlled them.

I knew the women and teenaged girls were routinely being raped and abused, and the men were sometimes tortured by being made to watch as those they loved were hurt in this way. And I could feel that the corpses of those tortured or whipped to death were thrown to the wild beasts for food, with total disregard. It was like the slavery of the 1800’s in reverse, and far worse. I could feel that no law enforcement of any kind would be coming to save these poor people.

I felt that all the larger, important cities and all the government was gone at this point, and the people left alive were just trying to figure out how to survive. It felt in the vision like gangs of heartless robbers and killers had taken over various areas, and this was the result.

Lord, what is this coming that I see? Please give us a word about this.

“White slavery is coming to America. Have you no part in it, My people, for I will not hold those guiltless who do. There is much innocent blood spilled on this land, and more bloodshed is coming.

An evil Spirit of Slavery is planned by the enemy for the time of lawlessness coming to the land of America. When this spirit is released, atrocities will be committed upon those taken captive.

My people, pray for much mercy in this time, for the evil that will prevail in your land as this happens will be very great, and it will be widespread. Desperation will fill the hearts of all in the land as they realize America is destroyed, and depravity will be evident in all the land.

Those left in this time will have little hope of any kind. Pray you to be counted worthy to escape all that is to come.”

10 And then shall many be offended, and shall betray one another, and shall hate one another.
11 And many false prophets shall rise, and shall deceive many.
12 And because iniquity shall abound, the love of many shall wax cold.
13 But he that shall endure unto the end, the same shall be saved. (Matthew 24:10-13)