You are here: Home » Prophecies » “Watching the Cuban Missile Crisis in slow motion all over again.”
Share this post: 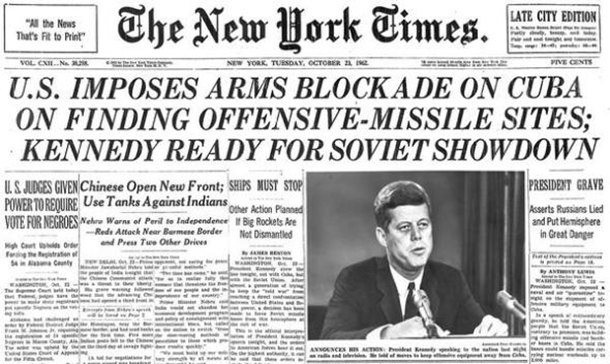 I find it interesting that in the recent dream I posted about America going to war, I kept seeing the letters JFK, and the people in the dream were saying that times were just like when JFK was alive.

At the end of my post, I mentioned that I researched what war was active during the short time Kennedy was president. I found that during his presidency, we were in the beginning stages of the Cold War, that involved the Soviet Union (now Russia), and also the Bay of Pigs, that later led to the Cuban Missile Crisis.

Today, while at the grocery store, I came not upon one, but THREE magazines that featured the Kennedys and their legacy on the front cover. In addition, several days ago, Senator John McCain said, during an interview, that we were watching the Cuban Missile Crisis in slow motion all over again. He was referencing to the issues with North Korea.

Is this a sign? Well, I’ll let you decide. In the meantime, I do suggest that we as Christians need to make sure our house (temple) is in order. Time is running out!

Great discussion on a possibility
http://youtu.be/K1ju1j7BkFY

My first reaction to this is that if the US and Russia engage in another “Missile Crisis” – Russia will not be the ones to back down this time. It seems to me the view of nuclear war has shifted from “mutual assured destruction” to “first strike wins”, and that the Russians could easily be persuaded that taking out the USA would be doing the world a favor.

A voice said to me, “Watch where the Russians penetrate America.”

I saw these words being written: Alaska; Minnesota; Florida.

Then, the man spoke again, “When America goes to war with China, the Russians will strike without warning.”

The other two presidents spoke, “We, too, will fight for you.” Each had a place already planned as a point of attack.

All of them shook hands and hugged. Then they all signed a contract. One of them said, “We’re sure that Korea and Cuba will be on our side, too. Without a doubt, together, we can destroy America.”

Mr. Strait, Regarding numbers, may I suggest: http://www.dailycrow.com/1958-western-a-man-named-trump-promises-to-build-a-wall-in-texas/#more-6431

Sounds like things are heating up again in Syria. Superstation95 has been reporting. No doubt that Dimitru’s vision will come to pass one day.

The morning that this posted I awoke from a dream in which people (Americans housed in a large building with many rooms) had been lined up single file in front of a table behind which was a Chinese military officer. For some reason things like flashcards were being made to be handed over and their content was being erased…

I grew up in Florida during that time and remember well the Cuban missile crisis doing daily missile drills, being released from school early and almost everything closing down the last night before things calmed down. I always thought what difference does it make to hide under a desk if a nuclear bomb explodes close by, and at the time we lived in Tampa.

Greetings in Jesus name Mena. This is a confirmation of two dreams I had of explosions on 4/19/17 and 4/24/17. The third dream I had on 4/25/17 involved JFK.
I was riding with JFK in a charter plane near some mountains (like the brownish mountains I have seen in Nevada ) and I remember what stood out was him saying that he needed to make a stop to see his secretary before we arrived to our primary destination. I remember being surprised but said quickly to myself that I wasn’t going to judge. I woke up shortly after that.

Amazingly two days later, (let me pause right here exactly in mid thought. As I ask my wife a reference question to what happened two days after my dream, she literally comes across this headline at exactly 8:08 pm from the Boston Globe “Obama zooms into Boston to accept JFK Profile in Courage Award”….now back to my original point!), JFK’s unedited inner thoughts on politics and personal beliefs diary sold at a Boston auction for $718,750.

When I looked up his secretary, I found that it has been 53 years since his assassination, he was the 35th president (53 backwards), and in 1953 he took Senator in Massachusetts. Also my wife says it’s 53 degrees in Boston, Massachusetts right now. Also, Boston has 53 zip codes. Sooooo, I’ll let everyone take that all to prayer!

My point about it being 8:08 is that Barack Obama was the 44th president. 4+4=8. A lot of number confirmations in such a short time span of me writing that message.

God has everything in control. It’s finished as Jesus said! May God’s peace comfort you all and may we all learn to “be still and know Yahweh is God.”

Point 3. I literally do not look for these things at all. I just happen to glance at the time sometimes. Even as I finished writing my last post for us to “be still and know He is God”, I posted it at 8:33. Our Lord of lord’s and King of king’s died at 33. I just love how precious, precise, and wonderous our Heavenly Father is and how we can sometimes catch a greater sense of His timing.

Btw, I meant to say I pointed it out to my wife at 8:33 and spoke to her about it. I didn’t post till actually 8:35. Which just like I thought, was just a little note token to me. I probably should have just kept that last one to myself, but I got too excited. Sorry for the flow of posts lol. Be blessed saints and let us rest in Him!

Here is an odd fact. I believe one of the last pardons Obama issued was to former SF Giant Hall of Famer Willie McCovey, whom of all people I met at a gas station one day near where he lives……this was after interceding for him (Willie) unknowingly one day as directed by God, believe it or not. My point is, guess what Willie’s uniform number was? You got it……….44! God must have a sense of humor!

Wow. I’m in awe of how awesome our God is! Look at how prayer and intercession will actually change things! That is an mighty testimony of the working of our God!