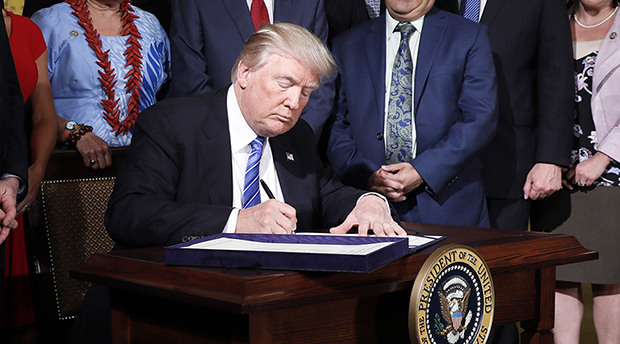 In many ways, President Trump appears to be a nationalist, not a globalist, but yesterday, he advanced the globalist agenda by signing into law new sanctions against Russia.

The globalists seek to destroy Russia’s economy because Russia seeks to replace the U.S. dollar as the world’s reserve currency. Like so many other nations, they’re tired of the U.S. abusing our leadership role by printing dollars out of thin air with nothing to back them up. But instead of dealing with our own mismanagement, the deep state globalists prefer to vilify Russia and anyone else who stands in the way of their sacred cash cow, interest income from every Federal Reserve Note.

Apparently, he knew his statement made no sense because he tried to explain, “It represents the will of the American people to see Russia take steps to improve relations with the United States. We hope there will be cooperation between our two countries on major global issues so that these sanctions will no longer be necessary.”

It reminds me of when Obama was President. When he took actions harmful to our nation, some people claimed he was misinformed while others claimed he was intentionally trying to destroy us. Now President Trump has me asking the same questions, is he misinformed or is he purposely advancing the globalist agenda? Regardless, his actions are leading us right into what God has been warning us about for years, war with Russia.

Despite all the “hope and change” surrounding our new president, the picture is getting clearer. Now we can see we’re stuck with Obamacare and sanctions against Russia, two of Obama’s most destructive policies. Will Trump’s promised tax cuts be the next casualty?

The full text of President Trump’s press release is shown below.

Office of the Press Secretary

Today, I signed into law the Countering Americas Adversaries Through Sanctions Act, which enacts new sanctions on Iran, North Korea, and Russia. I favor tough measures to punish and deter bad behavior by the rogue regimes in Tehran and Pyongyang. I also support making clear that America will not tolerate interference in our democratic process, and that we will side with our allies and friends against Russian subversion and destabilization.

That is why, since taking office, I have enacted tough new sanctions on Iran and North Korea, and shored up existing sanctions on Russia.

Since this bill was first introduced, I have expressed my concerns to Congress about the many ways it improperly encroaches on Executive power, disadvantages American companies, and hurts the interests of our European allies.

My Administration has attempted to work with Congress to make this bill better. We have made progress and improved the language to give the Treasury Department greater flexibility in granting routine licenses to American businesses, people, and companies. The improved language also reflects feedback from our European allies who have been steadfast partners on Russia sanctions regarding the energy sanctions provided for in the legislation. The new language also ensures our agencies can delay sanctions on the intelligence and defense sectors, because those sanctions could negatively affect American companies and those of our allies.

Still, the bill remains seriously flawed particularly because it encroaches on the executive branch’s authority to negotiate. Congress could not even negotiate a healthcare bill after seven years of talking. By limiting the Executives flexibility, this bill makes it harder for the United States to strike good deals for the American people, and will drive China, Russia, and North Korea much closer together. The Framers of our Constitution put foreign affairs in the hands of the President. This bill will prove the wisdom of that choice.

Yet despite its problems, I am signing this bill for the sake of national unity. It represents the will of the American people to see Russia take steps to improve relations with the United States. We hope there will be cooperation between our two countries on major global issues so that these sanctions will no longer be necessary.

Further, the bill sends a clear message to Iran and North Korea that the American people will not tolerate their dangerous and destabilizing behavior. America will continue to work closely with our friends and allies to check those countries malignant activities.

I built a truly great company worth many billions of dollars. That is a big part of the reason I was elected. As President, I can make far better deals with foreign countries than Congress.

James, I disagree with you on this. President Trump could not have vetoed the bill. It was passed by veto proof majority by both the House and the Senate.

Trump still had the option to veto it and the authority to stop all sanctions. By signing off, he put his stamp of approval on it, just like all the harlots in Congress who went along with it, knowing it was wrong. Someone must take a stand for righteousness, no matter what the cost, and stop selling out to political correctness and compromise. If Congress overrides his veto, then the blood is on their hands, but since Trump signed it, the blood is on his hands too. He had many options available, but chose to crater like a coward bowing down to the deep state psychopaths. Please see the post sharing Paul Craig Robert’s recommended action steps Trump could have taken. Here is the link:

Thanks James, and I stand corrected. I missed the post from Paul Craig Roberts. Looks like President Trump did have options and did not do the right thing.

Good article Mr. Bailey. The people in charge of the Titanic even knew that bailing out the water of their quickly sinking ship would only add moments from the ships demise. Bailing water from this sinking ship will not work either. The only thing that will fix this ship is to get it into a safe harbor (Jesus Christ) and repair the damage (repentance). Nothing short of this will ever work. No need to try and figure out politics of a corrupt system (satan) because it is evident that politicians (demons) aren’t willing to follow the constitution (word of God).

This sure make Donald J. Trump look weak. Congress knew his fear of looking like a Russian sympathizer would make him vulnerable. Too bad he didn’t trust the Lord enough to stand down to Capitol Hill, our nation’s true bully pulpit, aided by Obama’s shadow government and the MSM. This has Obama’s fingerprints all over it. He surely attacks from every angle, with his advisor-in-chief the Dragon, but take comfort he can only succeed for an appointed time. Pray that going forward, Donald Trump takes fear of man out of the equation when making costly global decisions like this.

There are so many pieces to this puzzle. ..I like how you do not rule anything out regarding Trump and his role…I believe it is multilayered what it is, his purpose and how God will use him. Gods ways are higher than ours and so complex compared to ours..all we can do is pray for Trump and discernment and seek God not our own fleshly reasonings and preferences Brother James, thank you again for keeping the body up to speed

Looking at this in the light of the scriptures Jer. 23 comes to my mind , despite the fact that not being born in America i actually love this country, seemingly, more than my own birth country and I have prayed so much for this nation but it seems like Saul her leaders are too blind to see and are not courageous to stand in the Counsel of the Lord ,instead you have placed your trust in men. technology, false hopes etc. I will implore you all including myself to repent now before things get messy because this latest decision by American leadership is going to bring untold hardship to the masses as the perpetrators of this evil schemes have an escape plan in place for when the SHTF and SNTFU. Please let us stand in the counsel of God and wait for His evacuation team. May God in His mercies protect us and loved ones from the schemes of the wicked in Jesus name . I plead the blood of Jesus over this message and its reader let it not be used against the people of God including myself in any way in Jesus’ name Amen. Thank you Abba Father In Jesus unfailing name I pray.AMEN!

If Russia attacks many Americans who are addicted to drugs and or alcohol will no longer have funding for their addictions.

For those of us who have to work around demonically oppressed or possessed people who are into drug and alcohol addictions or Satanism or all three this could be ?.

when 90 to 110 million Americans go cold turkey Suddenly at the same time I am guessing some of the people who are addicted would be interested in hearing about Jesus as addiction to Jesus has no downside.

It is always a very good time to pray. Thank you and may God bless you sorry if this offended anyone.

Could it be possible that President Trump signed this to “ensure protection” for his Russian born wife and his Russian bloodline son?