You are here: Home » Prophecies » America Under Attack » “It was the best of times. It was the worst of times.” 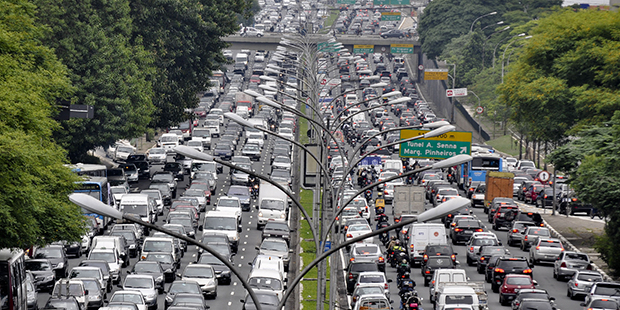 Today I saw a night vision of MUCH CHAOS. Gospel meetings were set up to quickly share the gospel as world events begin to quickly, very quickly disintegrate. Special emergency meetings were taking place everywhere, including the U.S., Canada and even the church in Israel.

I saw strategy meetings where believers prayed and discussed target areas to present Christ to people because the “time was at hand”.

I saw several mass exoduses as people gathered in their vehicles and RVs. Some were attempting to escape the coming judgments, but others were attempting to make it to their families just to spend their last hours with their loved ones because they knew what was coming.

I saw one group of BATTLE hardened, well-versed Christians witnessing to Jews in Israel. I saw another group of Spirit empowered believers, normal everyday people, sharing Jesus with those who were stranded on the Interstates, trying to make it to safety and friends and loved ones. The believers were trying to help them prepare their hearts for that which was coming upon the land and for the soon return of the Lord.

I saw the look on some of these dear faithful saints giving of themselves, knowing their time was short. Many would faint and get exhausted, but they saw the need, so they pressed forth.

Many people were open because they were fearful and scared. Entire families were getting saved while in their cars, trucks, vans and RVs stuck in traffic, being witnessed to by one of these fire-branded believers. Others rejected the message and became vile to those who shared. The believers learned to immediately go to the next car because the need was so great and the time was so short.

All throughout seeing this astonishing move of the Holy Spirit, constant updates as to what was happening could be heard as the believers approached each vehicle. At almost every stop, the news reports mentioned Israel and the Middle East. People were frantic to get the latest updates because they were aware bad tidings could be coming to them at any second.

Then there appeared to be a sudden uptick in activity, both in the bad news and the works of these evangelists. As more and more bad news poured in, they worked even harder, not in a frantic way, but in a firm and calculated way, they went to those who were obviously open to the Gospel, shared with them and then led them to Christ.

There was a palatable sense when the last minutes begin to wind down. Many accepting their fate, sadly many despondent, yet others hungry to hear and thirsty for the Living Water!!

On the roadsides, in the bars, in community meetings it seemed anywhere there was a gathering of the people, God had a representative there. Many, many people were ushered into, swept into the Kingdom.

It was as stated in a popular novel, “It was the best of times. It was the worst of times”…

GOD MOVED POWERFULLY TO REACH THE LOST in those last hours and last moments!!!

One of my end day assignments is to pull people out of the gates of hell. I believe that many remnant believers will be transported to these disaster areas and lead many of the lost to Christ and into the kingdom. This vision resonates with what I have been shown in the past few years,

I remember the testimony of Sujo John who survived the World Trade Center tower collapse. He was caught in an area with 20 other people and started to call out to Jesus. These 20 people joined him in crying out. Sujo was the only survivor, but I believe that those 20 people entered into the kingdom that day. That is what I am expecting to happen in the near future.

We will be strong towers to the lost and lead many into the kingdom. May we walk boldly and without fear in these end times.

who redeems your life from the PIT
and crowns you with love and compassion,

Tasha, I also have felt this about certain other people that some who had worked with the evil, having been trapped through early childhood deceit or lust of flesh and eyes, will be given a 2nd chance or a do-over, and just like Samson who was captured through deceit,lust and the flesh, yet they will be given that end time final way of escape just like your character mentioned, Sydney Carton. I find myself praying for those now, not knowing nor having seen them yet, but seeing those things which are coming, I pray that they, as well as myself, will, like Stephen, see intently into heaven and the eyes of Jesus on that day and the light affliction will be even less.

Oh that is pleasant to hear that you are praying for these people, and that their eyes will look straight to heaven and see Jesus in that day. God will bring it to pass.

Thank you my brother!

One the way to town this morning I startled a mother and fawn crossing the road. The fawn ran the wrong way and got separated from it’s mother running down the road but when it didn’t see its mother it went to the side and lay down to wait for her. I got a great pic of the fawn. Good lesson for us on trust – we can wait for Him, he’ll be there.

On the way back at about the same spot there was a car at 90 degrees to the road with its nose on the road and its tail against the bank. It looked like a spin out and reminded me of your dream Marty so I backed up and asked the man if I could help him. He had just run out of gas and was trying to turn around but got stuck. He had no money but he had a gas can and the station was only about a mile away so it wasn’t long and he was on the road, but he was extremely grateful and before leaving asked several times what he could do. I told him “Pass it on”, and reached out to shake his hand which he grasped with a big smile. He said that he does try to do that.

Mark, just a personal thought or note on that ‘pass it on’. As I have been reading prophecies and words on z3 here, I have noticed that events are happening to me or around me which confirm those prophecies and words. The interesting thing seems to be that The confirmations stemming from the prophetic word(s) is getting closer and shorter time between the word and the confirmation! That shortened time frame appears to mirror the bigger picture the prophets are speaking of as the time of tribulation shortly is drawing nearer to us.
As I see prophetic words being fulfilled and I’m convicted to trust God and give freely so that when the time is for me to receive His grace and protective covering, He has told me to ‘pass it on’ to others also.
Great example of trust in Him and as you have done it unto the least of these my brethren so you have done it unto ME(Yahuwshua). Enter in to the joy of your Master.

The fawn story is a great illustrated sermon. Thanks Mark.

Hi Marty, I read your facebook post about this dream earlier today and have been thinking about this all day. The Lord has convicted me that its time to stay “sober and vigilant” (1 Peter 5:8). I have been thinking of all the missed opportunites I have had to witness to the lost in the last few weeks because I wasn’t relying on the Holy Spirit to guide me in those specific situations, or because I was too worried about what people would think of me.

Last week I had a dream about social chaos and political upheaval. I saw politicians arguing and shouting over each other. I sensed in the spirit that a terrible catastrophe was about to take place. On the streets, some citizens were out protesting, but most people were feeling lost and confused. Some men were shooting and killing people just for the fun of it. As I watched all of this happening around me, I cried out to God to save my family and friends because I knew Jesus was coming soon.

This confirms a ream that I had a couple of days ago. I had a dream that I was on an airplane (747-commercial) While in mid air the airplane was rerouted to New York City. We landed and stood on the runway, but never went to the gate to disembark. I went to the pilot to ask him why did we land in New York? He never responded. I looked out the window and the city was in total CHAOS. People were screaming and there was anarchy everywhere. Prayer is essential for the times that are upon us. We must seek God in our secret places as we stand firm on His promises found in His Holy word.

Marty,
Thank you for your faithfulness is sharing the dreams and visions of the Lord. This really resonates in my spirit.
God bless you!

Mark 1: 1-3
1 The beginning of the gospel of Jesus Christ, the Son of God; 2 As it is written in the prophets, Behold, I send my messenger before thy face, which shall prepare thy way before thee. 3 The voice of one crying in the wilderness, Prepare ye the way of the Lord, make his paths straight.

This dream could be both symbolic and literal. We are one asteroid strike, earthquake, plague, war, economic collapse or other disaster away from this actually happening. I need to live with greater urgency. Thank you and God bless.

I initially thought of an Asteroid, but as I kept reading, I perceived this is talking of Nuclear war. I believe America will be destroyed by Nuclear fire one day, but I also believe the Rapture will precede it. Perhaps the last moment Saints will be anointed with such fervor and zeal, that they will love not their lives unto the death, knowing His appearing is at the doors.