You are here: Home » News » Australia » “The time for Australia has come. I am about to strike the depths of the sea and throw arrows of fire.” 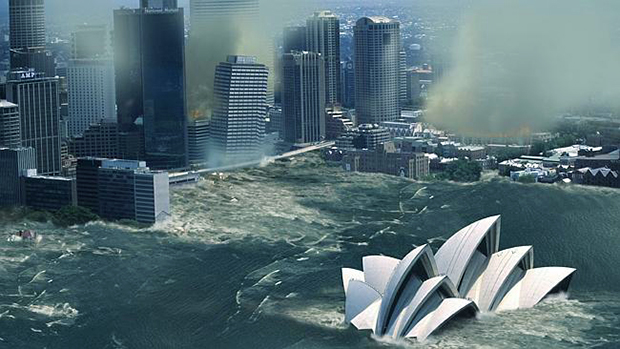 The following is part of a prophetic dream for Australia received by Pastor Daniel Nalliah from Catch the Fire Ministries on October 24, 2018. You can listen to the complete message in the audio recording shown at the bottom of this post.

“In a dream and a vision, I was taken to several places. I met with Moses and Joshua. I was surprised and pleased to meet them. This happened on 24th October 2018, at 2 am.

I felt my spirit leave my body. I was accompanied by one who was wearing white linen robes and had a rod in his hand. He first took me to the Red Sea, where I saw Moses. He did not speak. The one who accompanied me said, ‘This is Moses. He crossed the Red Sea.’

At this point, I was reminded how God gave me the opportunity to baptize people in the Red Sea and the Jordan River. I am privileged and honored that I was able to do so.

Suddenly, I was high up over Australia looking down over Australia. Then, I suddenly saw a wave of water surging inland and covering parts of Australia and people were shouting, ‘Tsunami, tsunami!’ They were helpless and had nowhere to run.

What was clearly visible to me was the tops of three bridges; the Harbor Bridge in Sydney, the Westgate Bridge in Melbourne and the bridge in Hobart. Very tall buildings were immersed in water.

Then the one standing with me said, ‘The time for Australia has come. I am about to strike the depths of the sea and throw arrows of fire.’

Just at that moment, I saw bolts of lightning strike every state and territory across Australia, causing major bushfires. There were also flood waters across the land. Then the one standing beside me said ‘Repent, repent repent.’

I believe the next six months are going to be very crucial. I wondered why God chose this period of time. I believe it is because we have a born again Prime Minister (king) and prophet (Church). Repent and cry out to the Lord and pray for our nation. The Lord further promised a harvest of thousands of souls in Australia.”

And fear not them which kill the body, but are not able to kill the soul: but rather fear him which is able to destroy both soul and body in hell. (Matthew 10:28)

12 Wherefore, my beloved, as ye have always obeyed, not as in my presence only, but now much more in my absence, work out your own salvation with fear and trembling.
13 For it is God which worketh in you both to will and to do of his good pleasure.
14 Do all things without murmurings and disputings:
15 That ye may be blameless and harmless, the sons of God, without rebuke, in the midst of a crooked and perverse nation, among whom ye shine as lights in the world;
16 Holding forth the word of life; that I may rejoice in the day of Christ, that I have not run in vain, neither labored in vain. (Philippians 2:12-16)

Thank you Pastor and James for sharing this powerful dream-vision. It sounds to me that end time events are at the door. Current events are catching up to Christian words, dreams and visions. Russia, China and the US preparing for war, political unrest in America like never before, the world debt at crisis levels and streams of immigrants threatening not only American borders but those of Europe, Brazil, Columbia and Central America. There has never been anything like this before in my 76 year life time.

I live in Australia. …I am in tears as I read this post ; I know it is a TRUE WORD -HUGE WARNING & DREAM/VISION FROM THE LORD…..very serious hour we are in… one of my family members had a similar dream re a huge dark wave coming in & buildings & debris & people sucked into the wave.& the word ‘CALAMITY ” . in the city of MELBOURNE

.My SON HAD THE DREAM IN early March 2017…BEFORE THE LEGALISATION OF LGBT MOV’T LEGISLATION IN DEC 2017. . Alison Pound (W.A.) has warned also for Australia ..The Lord is asking (requires) for National Repentance… from The Top ( Gov’t down to the people ..) that is every single one of us on our knees in deep repentance for what has been allowed ; happened in this Nation.. & all manner of filth & idol worship ( sport included, the idolatry of it… he shall have NO OTHER gods/ idols before him.. .
Mathew 24 Men would be lovers of themselves, lovers of money, lovers of pleasure; more than lovers of God himself..the Creator of heaven & earth..
unruly etc..boastful, proud…! disobedient to parents etc… lawless.
.
What a huge Warning!..others have had similar warnings of A Tsunami Hitting the East Coast of Australia.. & also between Tasmania & the Mainland near Melb. Victoria…yes I remember all of brother Byron Searl’s warnings for Aust..& other nations June /July 2018 …then when you consider the Huge drought in many parts of N.S.W..QLD. IN WINTER..MIND U PLUS… FIRES IN THOSE PARTS IN THE MIDDLE OF WINTER 2018 ALSO ..UNPRECEDENTED.!

how can we IGNORE ALL THESE ….WAKE UP CALL BIG TIME..!

I too have recently had a tsunami dream which I remember vividly because it still feels like I was actually there and it was happening in real time.

I was on the downstairs deck pool area of a high rise hotel building in close proximity to the ocean and walked over to the beach side.
I saw a very high wave coming towards the land, not unbelievable high like you see in the movies, but maybe 100m high.

I knew what it was and immediately ran to the fire stairs of the hotel next to the outdoor bar and up the stairs as fast as I could and had time to make it maybe 8 stories high (I can sprint up stairs very fast) however when the wave struck the building it collapsed.
It felt very real.

I live in Australia, and for the past 10 months (since December 2017) I have been asking the LORD the question, “what about Australia Lord? I know Judgement is coming to this country, but please reveal what you are going to do to bring the people to repentance.”
This revelation given to Ps. Nalliah resounds in my spirit.
In the morning of 25th October, 2018 I was given a message in numbers and words (as the Lord speaks to me this way)
It said, “count forty; to disappear, vanish away; (in) baptism,immersion( by) the baptizer; lightning.
When I read this post, I was moved to go back to reread this message, as it speaks of “disappearance in an immersion” and baptism by the Baptizer ( who is Jesus) and lightning being sent.
That morning I checked what 40 days would be and found it was 3rd December, or 25th Kislev – Feast of Dedication of the Temple.
Interestingly, in Haggai, the date of 24th Kislev is mentioned 3 times for emphasis and the name of the prophet means “My Feast”. We also see that Jesus attended this Feast and it was at this time that He said, “My sheep hear my voice, and I know them,and they follow me; And I give unto them eternal life; and they shall never perish, neither shall any man pluck them out of my hand”
It may be that there is a correlation between the word given to me and the vision and message given a day earlier to Ps. Nalliah. Please take this to the Lord in prayer, brothers and sisters, especially those in Australia.

Byron Searle had a word about God sending cold to Australia this winter (and it has been cold by our standards). Now, in a recent word, he is going to send the heat. Refer: https://byronsearle.blogspot.com/search?q=australia Regards from Down Under.

“Australia – You have mocked Me once too many times by allowing the sodomites to run the nation! I will bring heat and fire to you!”

Who is the current minister of defence?

Really interesting. Will read closely when I have a chance,
Phil

Phil, this could be the very thing your friend has been warning about! (See https://z3news.com/w/anniversary-911-visit-america/#comment-147607 .) Oh, how Australia has fallen, as a nation… A Prayer for the Nations Daniel 9 verse 18, King James Version 18 “O my God, incline thine ear, and hear; open thine eyes, and behold our desolations, and the city which is called by thy name: for we do not present our supplications before thee for our righteousnesses, but for thy great mercies.” We confess with our nations throughout Africa, Asia, Europe, the Americas, and Oceania, that we have sinned. We have dared to turn away from Your holy and irrevocable commandments, which you gave to us as an expression of Your will. We have declared them irrelevant, invalid, and no longer binding—even within the realm of the Christian Church! In doing so, we have opened the floodgates of sin! Lord, You see the gross sin that has so pervaded Africa, Asia, Europe, the Americas, and Oceania. We have called what is evil “good”—‘marriage’, between two adults of the same sex; also, ‘marriage’ between one man and up to four women and/or girls—some ‘brides’ being only small children; perverse religious, cultural, political, ideological, and sex education—from pre-schools, through to tertiary education; the wanton murder of unborn and partially-born children; legalised drug use—illicit, and prescribed drugs—for children and adults; sex rings (for Satanic Ritual Abuse, as well as those crimes committed by even the most petty of sex offenders; legalised gambling; violent crimes of all kinds; false religion; false god worship; all kinds of fraud; all kinds of demonic attitudes toward ethnicities, and people in general, based upon appearance, intelligence, abilities (or the lack thereof), and/or religious, cultural, political, ideological, and/or personal statuses; and many other detestable practices undertaken by the citizenry, the governments, as well as… Read more »

I question in myself whether these tsunami are man made (arrows of fire) but whether they are man made or not Australia is an easy take over if you flood the major cities as most of the population live in them. As the light of God goes out in cities the devil has more power over those cities and will bring death to them. Advisable to move away from the coast due to the following verses:

Luke 21:25-26 New International Version (NIV)
25 “There will be signs in the sun, moon and stars. On the earth, nations will be in anguish and perplexity at the roaring and tossing of the sea. 26 People will faint from terror, apprehensive of what is coming on the world, for the heavenly bodies will be shaken.