You are here: Home » Prophecies » We are in a new season of prophetic release. 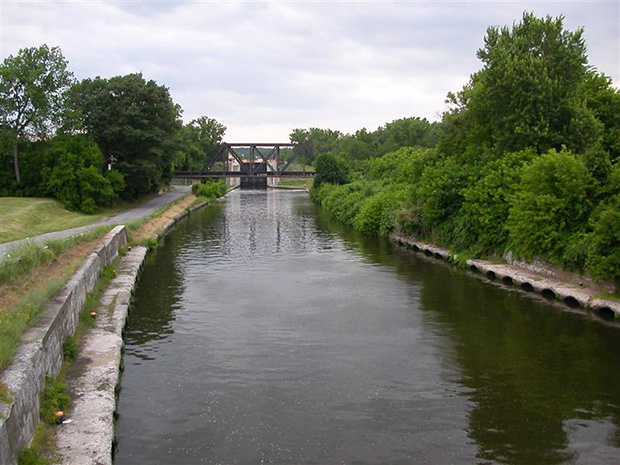 I saw a vision of an angel standing by the Erie Canal. He was dressed as the Loch Master, who raised and lowered the gates of the canal. He had his hand on the long lever waiting to pull it back to raise the gate. From watching him, I knew that he was waiting for the water levels on both sides to be equal before he opened the gate. After they were equal, he opened the gate. I then could see the waters of the canal flowing freely, and there was now a greater ease in navigation in the region.

When the angel was satisfied that the waters were flowing to his satisfaction, I saw him turn. Then I noticed another lever by the same angel that I had not seen before. He looked at me and then winked. Then he pulled that new lever, and I saw molten lava come pouring through into the freshly flowing water, and it ignited everything into fire. The whole region was now on fire from the lava flow.

We are in a New Season of prophetic release into those regions that have been seeking to prepare themselves for habitation. The Father has signaled the angelic helpers who have been watching the maturity levels rising among those believers who have been made ready.

When the people continue to rise into new levels of understanding and productivity, then the angel will pull the lever that will release the greater fires of His desire, which will then bring purification, and transformation to the entire cities and regions.

When the maturity level equals the standard of the measure that the Lord has intended for us to all reach, then the angel will pull and release the greater fiery flow, so that their spiritual authority could be established, and begin to function within that region for a full transformation.

The latter shall be greater than the former:

Susan, with all due RESPECT, please be made aware that NO MAN, nor WOMAN should ever hold the TITLE of “REVEREND.” For GOD ALONE is worthy of that title. However, for the sake of those who may be offended if one does not address another accordingly, the office titles allotted by Scripture are of the 5-fold ministerial offices: Apostle, Prophet, Pastor, Evangelist, Teacher [ie: Please note, this “teacher” is different in greek conotation/definition from Matthew 23:8]…
***
For we who operate in our duties and offices within the CHURCH BODY are simply SERVANTS & BROTHERS [SISTERS] = SAINTS (Romans 1)…
___________________________
Psalm 111:9- He sent redemption unto his people: he hath commanded his covenant for ever: holy and REVEREND is his name.

Matthew 23:8-11- But you are not to be called ‘Rabbi,’ for you have one Teacher, and you are all BROTHERS. And do not call anyone on earth your FATHER, for you have one Father, who is in heaven. Neither be ye called masters [LEADER]: for one is your Master, even Christ. But he that is greatest among you shall be your SERVANT.

In Agape of the LORD,
Brother Khawnan

Also, when we read the bible Paul never referred to himself as Apostle Paul, he did say an apostle of God, but never gave himself a title….None of the prophets referred to themselves as Prophet Isaiah or Prophet Jeremiah, they would, like you said, call themselves servants of God

Susan, with all due respect, according to your quote, “Then I noticed another lever by the same angel that I had not seen before. He looked at me and then winked.”

Uh? Where is your DISCERNMENT using the HOLY SCRIPTURES as your GUIDE to your “visions”? Please take a look at what the WORD of GOD states concerning ONE WHO WINKS [albeit, that conduct “of winking” also includes angels]:
_____________________________
Proverbs 6:13,14- He WINKS with his eyes, he speaketh with his feet, he teacheth with his fingers; Perversity is in his heart, he devises evil continually; he sows discord.

Proverbs 10:10- He that WINKS with the eye causeth sorrow: but a prating fool shall fall.

Many times, Rebecca, I have noticed that the Spirit uses euphemism and allegorical comments to speak a volume of words with just a few symbolic pictures or words, like a ‘word-picture’. For example, when Father God called me, He told me to ‘pray in Jesus’ Name’ ! He did not tell me to pray in Yahuwshua haMashiach name, which is the Name of our Savior, not the word, ‘jesus’. Jesus is actually a word which was taken from the name of an idol by the name of Ieosus, a ?Greek goddess or one of those other pagan nations. Why did He not tell me exactly…at that time? Reason is I would have had no clue who that was. I had been so indoctrinated into the ‘religion of Christianity’ that I did not know our Messiah by any other name than that one, the name I now use as His NICKNAME, JESUS. What the Spirit has been sharing with me is that the RELIGION OF CHRISTIANITY wants to use words to trap one into believing that a ‘word’ has power and 1) yes it does, but not in and of itself! And 2) the ‘intent’ or ‘purpose’ to which one puts a ‘word’ to use is far more powerful than the ‘perceived power’ we are lead to believe that a ‘word’ has. So, in other words, religion uses words to trap and ensnare us by. Those are the ‘magical words’ we have been taught to fear. However, I ask you, those of you who have seen Dr Emoto’s work, Messages In Water, know what I’m talking about and where I’m going with this. My personal summation of Emotos work is this: ‘Words have the power which we believe they do.’ The operative word of course, is BELIEVE in that sentence, and… Read more »

Very encouraging, Along this same teaching, please listen to Riaan Lombard speaking about bringing in the unsaved for the Lord. Very powerful:
https://www.youtube.com/watch?v=8F1ZugThHZQ
Removing the veil
God’s people perish for lack of vision. Many people are blind even though they don’t realize it, yet God has made a way for our eyes to be opened so we can see.
In whom the god of this world hath blinded the minds of them which believe not, lest the light of the glorious gospel of Christ, who is the image of God, should shine unto them. 2 Cor 4:4

I am come in my Fathers name. In John 5:43. Said the LORD. Yah. In psalm 68:4. By his name Jah. Zephaniah 3. Restoration of Israel’s remnant (purifying the lips). Zephaniah 3/8. Therefore wait ye upon me, saith the LORD, until the day that I rise up to the prey..3:9. For then will I turn to the people a pure language, that they may all call upon the name of the LORD, to serve him with one consent. Zephaniah means Yah had concealed / hidden. In the Hebrew text of Zeph 3/8 every letter of the Hebrew alphabet is used in the verse. Of which there are 22. I think this is the only time this occurs in the Hebrew. Zech 12. The coming deliverance of Judah. – Jerusalem a cup of trembling and a burdensome stone. Zech 12:6-8 In that day will I make the governors of Judah like a hearth of fire among the wood, and like a torch of fire in a sheaf; and they shall devour all the people round about, on the right hand and on the left.. The LORD also shall save the tents of Judah first, that the glory of the house of David and the glory of the inhabitants of Jerusalem do not magnify themselves against Judah. In that day shall the LORD defend the inhabitants of Jerusalem; and he that is feeble among them at that day shall be as God, as the angel of the LORD before them.. It was in the 5th month on the 10th day that Nebuzar-adan burned the house of the LORD (1Kings 9:8; Jeremiah 52:13) Ezekiel 20. In the 7th year, in the 5th month, the 10th day of the month… -the rebellions – Yah promises to restore Israel – The prophecy against the South… Read more »

Thank you, Jane NZ, I took a few days off over the last week or so. It has afforded me some time to dig deeper into the Spirit, which I believe is a premonition of (and not to toss negative connotations to that word either) something is getting ready to loose upon us. So, from that point of view it’s ‘interesting’ to see you speaking about the same thing the Spirit was leading me into at the same time-namely, deep prayer to seek His will. August 2nd – 3rd is the 9th of Av??? Wow, and that is coming up sooooo soon, and every year, that’s a major watch date, and I believe it may be indicative of what’s being birthed in the Spirit by so many of us whom He has laid upon our hearts to Pray Like Never Before and intercede so that this ‘birthing’ goes smoothly without any complications!

On premonitions and birthing. It is my birthday. I think i am finally starting to understand what the LORD has been showing me about this season.

I show some of my working out under the ‘wealth transfer’ article and ‘America I shall rise with a sword against you’. Unfortunately, i don’t know how to add the links here.

Your comments Thomas Nodoubt, are Ruach HaKodesh led and much appreciated. Thank you.

God bless you sister,
I used to live in Greece, NY, and I began my Christian walk in an Assembly of God church ! Glory to God!

Encouraging prophecy, especially for your area. Rochester historically is fertile ground for revival. It was also home to the Fox sister’s the pioneers of modern spiritualism.