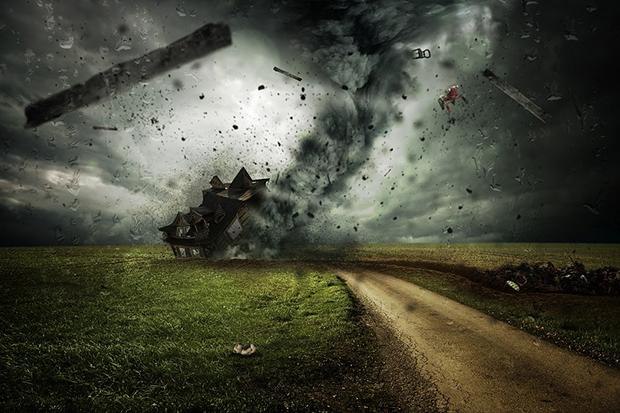 Z3er LoriQ shared the following dream she received regarding the future of the United States.

I had this dream a few years ago. In the dream, I found myself in the same metropolitan area that I was in scene two of my previous dream in June 2014 when the ash began to fall when I was at the mall. This time, I was outside the city, driving up to a scenic view in the mountains behind this city. Like my previous dream, it felt like Las Vegas to me with a large hispanic population.

As I was driving up this windy road, I began to feel motion sickness, so I pulled over and parked my car, a convertible silver mustang. About 20 other people had done the same thing, so we began to walk down a path towards the main boulevard, which was about two miles. On this path, we had to go underground for about 200 yards. As I came up the other side of this tunnel, I was joined by an enormous man. He was huge, the size of a mountain. I was a little startled, but he was so nice, I just kept walking with him. After 15 minutes of walking through the desert, we all made it to the main boulevard and the bus stop, which was the northernmost rural suburb of the city down below.

We were in the high desert and adjacent to the hills leading up to the mountains. As we were waiting for the bus, I turned around and looked at the city down below. Much to my chagrin, I saw an enormous tornado ripping the city apart. I don’t believe is an actual tornado because it was more of a whirling dervish, a supernatural event that looked like a tornado. It was too large to just be a tornado because it was the width and length of the city proper. It was tearing apart everything in its path and was heading straight for us.

When everyone at the bus stop saw it, it caused a panic. People were crying and asking me what to do. For a moment, I just didn’t know, but then I saw a dry creek bed against the side of a hill across the boulevard. I shouted at everyone to run to the dry creek bed and hunker down, thinking that maybe it was deep enough to protect us from the tornado. So, we all ran across the boulevard and jumped into the dry creek bed. I looked up and I saw the tornado was almost directly over us. Then the large man who had walked with me was on top of me, covering me with his HUGE presence.

I saw the sky one last time and saw what I can only describe as sulfurous briquettes being hurled down onto the Earth from this “tornado”. Then this man/angel put his own body over my face, covering me from head to toe so that no harm came to me. I felt thankful, but scared and horribly sad because I heard the agonizing screams of those who had no covering from God. I heard these sulfurous briquettes hitting people and I smelled the awful smell of fleshy smoke coming from those who were in harm’s way. Then I heard their screams stop and I knew they were dead. It was horrible.

The dream ended, but when I awoke, I could still hear their screams and smell their smoking flesh, which affected me more than my previous two dreams. It was one thing to see the aftermath of devastation, but it was another thing to hear it, feel it, and smell it.

After receiving this dream, it became very, very clear to me that GOD WILL PROTECT HIS REMNANT, HIS PEOPLE. Even if circumstances seem dire, even fatal, DO NOT GIVE UP HOPE. If you are meant to be on this earth, YOU WILL BE. God will help HIS People. He is Powerful, Faithful, and True. It reminds me of how He protected Meshach, Abednego and Shadrach from the fiery furnace. (Daniel 3)

Psalm 91 verse 4
He shall cover thee with his feathers, and under his wings shalt thou trust: his truth shall be thy shield and buckler.

I have heard other Brothers & Sisters in Christ that referenced seeing Las Vegas destroyed in dreams. It would not be surprising given the city’s nickname of “Sin City” and the marketing tag used for tourism, “What happens in Vegas stays in Vegas” which is similar to “Do What Thou Wilt”.

I lived in Vegas for twenty years, still have a sister who dwells there. Only had one vision while I lived there, I saw a nuclear bomb detonate at McCarran Airpot. All of us ran out on the tarmac but were engulfed in the nuclear explosion. That was 2004 and I was still an agnostic borderline atheist.

A year after that vision, God. In His Infinite Mercy, rescued me from that place of evil people. Forever, I am thankful and humbled in the way that God works in my life. Dont deserve it, but I will accept Him and His Grace.

God is definitely in the “Search & Rescue” Business! Amen! All Glory Be to God! ???

I enjoy reading your dreams LoriQ. Thank you for sharing them with our Z3 News Community.

Which is also one of the most absurd sayings ever. It is biblical in its arrogance, but Lori’s dream reminded me of the destruction of Sodom and Gomorrah.

Exactly! This vision really bothers me the most. The briquettes I saw were filled with sulfur and glowing red falling from the sky. Nowhere out in the open was safe and buildings didnt seem to be either. It was a supernatural presence that safeguarded people. I hesitated to put these dreams forth, yet I felt very moved by God to do so now. So glad James was kind enough to do so on his website.

Ive seen others ask people to take it to the Lord, this is the same case…

Two scriptures I read today: the parable of the tares in Matthew 13. And then Isaiah 13 I read maybe a half hour ago and that one is not just about old Babylon because it references the punishment of the whole world and also..*Sodom and Gomorrah* is in that passage. Isaiah 13 is also of relevance to your other dream.

I started feeling sick around the second paragraph. Lori, how much of this is literal, because I read it as..not to be taken as a literal tornado that way but something just as horrific and devastating? I don’t know..something about the nature of that disaster…maybe I’m just in a mood. I just feel like there is *way more* to this. I don’t know and I’m not sure I want to know.

I lived near the training gounds of the heflin’s in VA about 9 years. I went at least once and knew some people who were trained to be missionaries there. Here’s a cool video of singing in the spirit…I had a dream once I would teach kids how to do this. It is so refreshing to listen to.
Ruth Heflin Singing in the Spirit
http://www.youtube.com/watch?v=NNFh9YjbuqM

There are some people on z3 who might want to know more about what the comments mentioned in the past. Blessingsm Marilee

When I visited the revival meetings in Pensacola FL back in 1995, Ruth Ward Heflin laid hands on me and gave me a prophetic word that I have never forgotten. She was a great woman of God.

Ruth Heflin impacted my life greatly as well as my best friend’s. I loved being at the campground it was the best time of my life. The Aker family , Jane lauder all of them impacted my life in a Huge way. When Ruth preached and the Aker family there was literal gold dust that manifested all over the chairs our bodies the floors. I had it in my hands for years! She was a pure undefined saintly woman and a real example of the love of God , Faith in Him and miracles manifested. My favorite thing was sitting on the floor at her feet while she taught us. It was a relaxed in your living room type atmosphere and I’ve never met anybody like her since. She was a really beautiful woman who is missed greatly.

Here is someone explaining the ‘gold dust’ and what Ruth was like. She was so so wonderful and all of her people at the campground were wonderful people too.
https://youtu.be/6WEPSQDG4nM

Last night, I was showing my husband the YouTube videos of the “plague of grasshoppers” in Las Vegas last month ☹️