You are here: Home » Prophecies » Islamic Jihad » Prophetic Dream: We Must Know the Truth About Islam 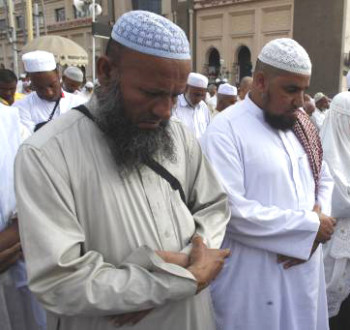 Across the street, I noticed a large, older house. I wanted to go inside. I was surprised the Arabs didn’t attack or persecute this house, but I knew it was because they were too busy fighting each other.

As my husband and I began to walk up the walkway that led to the house, there were two very large Arabian men blocking the path so we could not pass. Strangely, I commanded them to move by the authority of Jesus Christ, but they didn’t budge. I then turned to my husband and proclaimed boldly, “IN ORDER FOR POWER AND AUTHORITY TO BE RELEASED TO THE CHURCH, WE MUST KNOW THE TRUTH ABOUT ISLAM!”

After declaring this phrase, the men immediately moved out of the way and we proceeded to walk up to the house.

As we approached the porch, we knew there was something unusually different about this house! When we opened the front door we were overwhelmed by the tangible presence of the Glory of God! The atmosphere was so tangibly thick I felt like I could step up on it or even bite into it!

I began waving the thick, Shekinah Glory out the door and toward the street. Many people from outside were drawn to the glory in the house. They all began to enter as they were fascinated by the glory. People from all different walks of life, black, white, young, and old entered the house and looked around in awe.

I also was taking note of the details in the house. I specifically told my husband, “It was very important for me to look around and remember the details of this dream.” My husband sat and rested on a bench while I continued to walk around.

I noticed the floor was made of shiny wood. It had spaces in between the planks (similar to a shiny, backyard deck). Through the spaces, I noticed there was a cement basement floor underneath us. I continued to look around in fascination and yelled back to my husband, “Wow, it’s like a GREEN HOUSE in here!”

Suddenly, tall, green weeds began to grow up between the floor cracks and brushed against my leg. I immediately knew their intention was to wrap around me and grab my legs. I was frightened and woke up.

“In order for power and authority to be released to the church, we MUST know the truth about Islam!” This is a powerful statement!

In this dream, understanding the truth about Islam was the key to giving us authority to walk into the supernatural glory of God and bring great revival. People of every tongue, tribe and nation were entering into the fullness of God’s presence. It became a rich “greenhouse” producing all kinds of fruit. Greenhouses flourish regardless of the natural elements going on around it.

However, from within the basement of the house, tall weeds began to grow up from underneath. I believe the weeds represent the betrayal and persecution that will rise up in the midst of the glory. Just as Jesus speaks of the wheat and the tares growing up together, there will be tares or weeds that will oppose this move of the spirit and try to choke the word. However, we must not be frightened, because all these things must come to pass and then the end will come.

I had this dream three weeks before Joel Richardson came to teach at our home church, so I sent this dream out at that time. When he came, we all knew how important it was to comprehend his message and to understand Islam and the urgent times we are living in.

Fundamentals of Islam are anti-Christ in nature. Islam denies the divinity of Christ,acknowledging only his humanity.
What does this mean spiritually? Let’s refer to the Holy Spirit definition according to the Apostle John:
“Who is the liar? It is whoever denies that Jesus is the Christ. Such a person is the antichrist—denying the Father and the Son.” ( 1 John 2:22)
and : “but every spirit that does not acknowledge Jesus is not from God. This is the spirit of the antichrist, which you have heard is coming and even now is already in the world” (1 John 4:3)
Also: ‘ I say this because many deceivers, who do not acknowledge Jesus Christ as coming in the flesh, have gone out into the world. Any such person is the deceiver and the antichrist. (2 John 1:7)

In conclusion, this dream might indicate the actual ” Antichrist” that is yet to come will be from an islamic background and he would establish himself as ” god” , setting-up a one-world religion.

Great question Libby!!! I’m so sorry that there was not enough information to help give you clarity. This is a loaded topic that deserves it’s very own website. 🙂 I would love to highly recommend a fantastic resource for you; a book called, The Islamic Antichrist, by Joel Richardson. He has done extensive research and has great revelation on the Islamic agenda. This resource will be a great tool to get you started as the Lord continues to give you more and more understanding in this area. This book literally shocked me to tears and left me with my mouth hanging wide open!! I learned so much about the Islamic end time plan and how the Islamic “Messiah” is eerily similar to the biblical version of our Christian “Antichrist”. Please feel free to visit Joel’s website, http://www.joelstrumpet.com, pick up the book or watch his interview videos and that will give you way more valuable information than I could. Blessings to you and I encourage you to ‘know the truth about Islam’! 🙂