You are here: Home » News » Jesuit Agendas » Political News » Prophetic dream exposes America’s two-party system for what it really is.
Share this post: 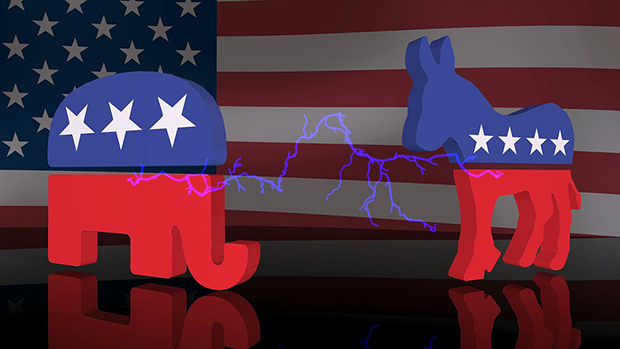 I had this dream Sunday morning, November 11.

I was headed out with all my kids (including my boyfriends kids, we are a blended family?). Christopher went in another car, ahead of us and led the way for me to follow. I made a stop before heading to our destination and my daughter Jordan and my future step daughter Bella got out of the car with me.

We decided to go inside this building that looked massive. Inside, I noticed tons of rooms. I had a sense this place was like an attraction, an amusement park, a place of entertainment.

At a higher level, I noticed live elephants. There was a rail, like train rails, and like a factory conveyor belt. One by one, solid white, rectangular platforms came in with no supporting walls. An elephant was placed on each platform that came in, to be shipped out. I was not aware of the elephants destination, but I noticed that as soon as the elephants were placed on the platform, they could not find their footing. They were unstable, unsure of their footing even though the platform was flat. It was like watching an elephant try and balance on a ball at a circus.

After that, I walked towards an opening that led to the outside. As soon as I stepped out, I immediately looked to my left and saw an elephant being detained by two men. One man was pulling it’s ear aggressively back as it fell backwards, the other man was aggressively holding it’s trunk. As these men were detaining this elephant, I gazed upon the face of the elephant and it was horrified. Fear flooded that poor elephant. At that point, my heart burdened for that poor creature. It was heart wrenching.

I kept walking a little further and came to a platform that looked like a stage set forth for a seal to come jumping out of the water and pose. Well, that is exactly what happened, but this seal was different. As it jumped out of the water, it was huge and had the face of a donkey, but no ears. Everything about this creature was a seal, but the face was a donkey.

My girls were right behind me and we all approached the creature because it was so adorable and very cute. Right before we were about to leave, I gave the creature a kiss on the muzzle, but it left a bitter and extremely salty taste in my mouth! Yuck! I took my hand and tried to get the taste off my mouth with my finger tips.

That is where it ended.

I am putting what I believe God has shown in regards to some things in this dream. I humbly submit and take my courage in Christ and share this.

The seal with the donkey face might represent the Democratic party because it was like a circus of entertainment. The donkey looked appealing, wonderful and even “cute and coy,” but it left a bitter taste inside my mouth and stomach, so that seemed like a warning.

The purpose for the large building was all about entertainment, like an amusement park. Even though they were handling elephants and donkeys, there did not seem to be anything political about it, just pure entertainment for the people.

Also, I think the reason why the same building contained both the elephants and donkeys was because both were there for the same purpose, which was purely amusement and entertainment. They were just different performers in the same show, and both were being handled and orchestrated by the same people. So, I believe the dream reveals neither party, Republican or Democrat, holds any merit because both are just there for our entertainment.

Perhaps the way the elephants were being shipped out was symbolic of a manufactured belief system. I felt as if that one particular piece of the dream was incomplete as far as my understanding, but the word “manufactured” just popped into my mind.

On a personal note, I believe the kids were following me like sheep to a shepherd. God has appointed us to make way for the younger generation and He is leaving it in our hands to teach them in HIS WAYS. We raise the next generation in truth, rather then in the traditions of men and world government. We need to stand up and lead our kids to stand firm in their position in Christ. Let us lead our kids to NOT be devided, but lead them to be like minded in truth, in the body of Christ. Philippians 2:2!!! I rejoice and pray this scripture over the generation after us and already here!!!

I’m not here to judge anyone and I do believe in God’s Sovereignty. Just remember, none is worthy of praise and admiration, but our Lord and savior, Jesus Christ. God is the Alpha and the Omega, supreme and in control!

Whatever party we identify ourselves with, let us not put our hope on a “side” or put our identity in something that lures us away from our true hope. Let us take our authority in Christ and stand with Christ, our true identity. The world may be divided, but the body of Christ should never be a house divided. Put all your hope in Christ, no government on earth is going to save you! Jeremiah 29:11, 1Peter 1:3, Romans 15:13!!!

Perhaps God gave me this dream because I have never been someone interested in politics, only interested in praying for God’s will be done. If He says pray for our president, I will, or whoever else He lays on my heart. I just want an undivided heart towards God. I may vote what represents Christ, but my HOPE IS IN THE LORD!

Truly He is my rock and my salvation; He is my fortress, I will never be shaken. (Psalm 62:2)

But God’s firm foundation stands, bearing this seal: “The Lord knows those who are his,” and, “Let everyone who names the name of the Lord depart from iniquity.” (2 Timothy 2:19)

Built on the foundation of the apostles and prophets, Christ Jesus himself being the cornerstone. (Ephesians 2:20)