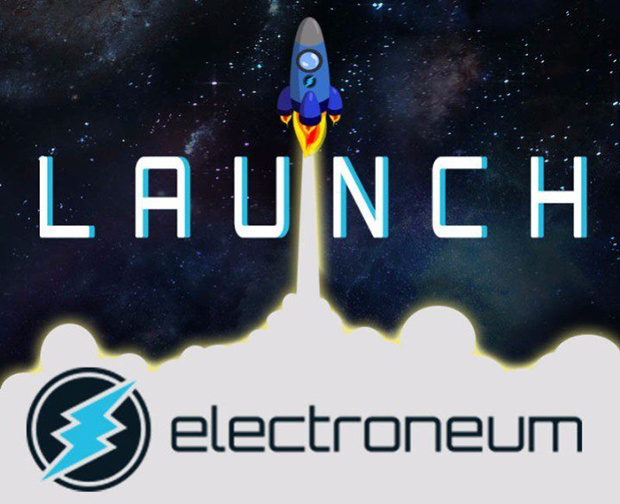 I had an Electroneum (ETN) dream shortly after Christmas. At first, I didn’t think it was from the Lord, but after a couple of days of pondering, I think it was for my own confirmation as I had already purchased ETN.

In the dream, I was not thinking about ETN at all and watched as a futuristic space shuttle was being launched. I was watching it launch and blast off from points of view like GoPro’s attached from the outside of it facing in. It was beautiful and magnificent and had futuristic looking, shiny blue lights shimmering through the cracks of the vehicle.

Then it got super high into the atmosphere where the sky was a pretty lite-pink, like it is before dusk. Then the Shuttle exploded and there were millions of electroneum coins shimmering, glistening in the atmosphere like glitter. Everyone was so excited and had smiles from ear to ear as they were trying to grab and collect every coin they could out of the sky. The feeling everyone had was that this was a very good thing, they were very happy. Then I woke up thinking about what I had just seen.

Joel’s dream confirms what God has revealed to several others recently regarding Electroneum, including myself. Electroneum is a crypto currency and is currently traded only on the Cryptopia exchange.

These insights are offered only as a starting point for prayerful consideration and not as a recommendation for investing.

What’s everyone’s take on ETN at this point?

Previous prophecies showed the best time to buy ETN would be after the crash of the third wave so we’re still waiting to see that.

also wondering if the Rocket is linked to this Nathan Leal dream.
http://watchmanscry.com/?p=4613

Z3 holding Cob. The patient has awakened and has come back up 50% already. I pray that those who were trying to get in had a chance these last few weeks to add some more.

Ed H
I think COB is heading to over $1 with this next ramp up.

I’m trying to get into COB as simply as possible with creating as few accounts as possible. Could I use my coinbase account to transfer ethereum to my cobinhood account, and exchange it for COB there?

I’ve stayed away from crypto because I haven’t really understood it. I’m trying to figure it out without setting up 34,972 accounts. sheesh!

Greg,
if you already have an account setup on Cobinhood then yes you can transfer over ETH and then buy Cob. Click on the 3 bars at the top right corner. then click on funds. Go to deposit and click on ETH. copy the address and send to that from coinbase. Hope this helps.

Thanks, Ed and Phanuel. I’ve got it switched from litecoin to ethereum in coinbase now. I can send it to cobinhood when it settles tomorrow.

Too bad someone in Houston decided that I needed to buy them $170 in gas on the card I had attached to coinbase. Now the card is shut down (charges disputed), and I’ve got to figure out a way to get some more funds in to load up on COB asap. 🙂

All financial markets will crash in time. I think its important to simply have a personal relationship with God where you can hear Him for yourself and trust Him to tell you when to sell your cryptos and stocks ect..We (God’s children) walk by faith, not by sight!

Amen Marisha, What does it profit a man to gain the world, but lose his soul. The love of money is the root of all evil.

Marcio,
No risk no reward . Its up 3.3x since you got in. I got in at about the same price.
Even though these are considered micro currency this one has hit triple tops and is going higher look for .0000501
Also have KIN. That one seems to have the most potential to really climb.It has already hit a double top and has now hit a new high.maybe .001324 that’s a guess based on it’s last run. Plus it’s ranked 82 on coinmarket. it will get looked it.

Ed h, I got in KIN at $0.000246 because of Tracie, even though it has 10 trillion total supply. It’s too cheap to pass up now. Putting in just a few dollars now is such a small risk, but buys a huge number of tokens. Thanks for the targets.

Marcio,
Wow what a day for those 2 cryptos today. KIN now at #43 and PAC at #59. PAC blew through my price prediction. Also KIN is getting close to .001324. Check out Electra.ETA. and HTML

Ed H,
Well let me lay it all out there. Here are these micro cryptos that are all bought on cryptopia for Litecoin.

I stopped looking beyond rank #700.
Why are all these cryptomonies found at cryptopia? Is it really good or a trap??

It’s not a trap. They list these to get more trades = more exchange fees= more revenue. These micro coins are the best way to make massive gains. Very risky so just invest what you are willing to lose. KIN just hit 1Billion marketcap. Its ranked #38 now. My price point for KIN came in 1 day incredible.I’m holding my positions. This is still dirt cheap and would not be surprised to see some massive action coming the next few weeks.
Thanks for the list, will check them out and see if I can find a diamond in the rough.

Ed H,
On coinexchange.io there are the following:

TIPS has a wallet hacking problem so I’ll leave it out.

Anyone know how long it takes cobinhood to verify a level 1 account? it says 2-3 minutes on there site, not the case for me

Lance, it took me about 3 days but it was around Christmas so maybe that’s why it took a little longer.

i just received invite to complete a form to be a electroneum mobile mining experience beta tester.

It is official, my funds came through early. I own 4002 shares of ETN. Praise the Lord. I am so thankful for being a part of the group and thank you for sharing your visions on this website. I believe the Lord has shown me SALT and I wanted to contribute to the group as well.

James regarding Sadhu Sundar Selvaraj. I took the vision to mean war in 2017 he was told to count 70 years from 1947 not 1948. Maybe your right that the moving our embassy to Jerusalem started what he saw. As to unfulfilled prophecies he predicted war with Israel in 2012.

Do you have a quote showing exactly what he said regarding the events in 2012? Lots of false accusations are based on misunderstanding what was said, making wrong assumptions about what it meant.

How ’bout you and Robyn go and develop a, “crypto-pill” that we can just swallow to catch us all up on the necessary crypto currency information ….I’ll be first in line to purchase!

I would like to have one too. It is very time consuming keeping up with this stuff.