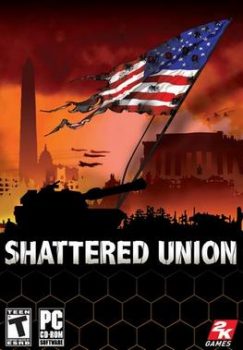 YouTube Channel, Theology Ed, has video entitled, “Shattered Union: A video game that predicted this election crisis and subsequent violence?” that is 26:28 minutes in length.

Listen how closely this game mirrors our current reality & shows the Globalists’ plans (I.e. Civil war, violence, martial law, a few U.S. states seceding from the nation, the U.S. changes from that point on never to return to its prior state, etc.). The Youtube Creator shows news article headlines showing how the U.S. seems to be on a similar path as is portrayed in this video game. The Globalists frequently use predictive programming years in advance of events to help reduce the masses’ resistance to “the planned event(s)” by embedding these series of planned events into our entertainment – i.e. tv shows, movies, books and video games.

Will the Supreme Court intervene & sidestep the electoral process by disqualifying Biden in several states (like the issues in key battleground states)? Will we continue to see unrest, rioting & a growing number of militias giving rise to ever-increasing domestic terrorism? Will Washington, D.C. get hit with a low-yield nuclear weapon that kills the elected President during the inauguration which breaks the succession? Will the U.S. descend into chaos as a divided nation resulting in the European Union sending “peace keepers” (UN troops to Washington, D.C.) to secure international interests? Will California secede from the U.S.? Will Texas & neighboring states secede from the U.S.? Will a second Civil War with 7 factions erupt across the U.S.?

Do not engage in the violence. Be clear who the Enemy is. Do not partake in the Hegelian dialect used in politics.

Understand that the Globalists’ plan is for the masses to lose confidence in current systems & processes to demand CHANGE! The CHANGE will be the Antichrist/Global Governance/Digital System.

Been thinking of Terry Bennett’s 2014 interview on Trunews where he said we would have a “fractional government” and the military would step in to help the USA.

https://www.spreaker.com/user/trunews/9-18-14-terry-bennett
unsure where in this interview he said that about the military helping and Fractional Government.

Great catch Matt! The fractional government/leadership for the nation has been predictively programmed in so many movies & books & shows & games that it definitely seems that soon there will be very little “United” about the U.S. ?

27:45 to 28:00 USA, civil conflict, Civil war & then invasion
30:00 mark on Governmental chaos and a Fractionalized Gov and the US Military stepping in and seizing control but to help the nation.

Another very encouraging word from Julie Whedbee. Thanks Lord for calling our gazes upward from this seething mass of chaos and confusion. Be Blessed one and all!
Bill

I agree Bill! I love this paragraph & I give thanks for God & His Goodness in the times we are in!

“You My remnant army will be a force and a power that no evil will be able to withstand. Through you, healing will pour forth, and deliverance of those who are bound. Darkness will be pushed back, and many, many who saw all as lost will once again have hope. You can not even imagine the glory released on the earth, as I invade this realm and infuse My chosen ones. Light is come My beloved. Light has prevailed over darkness. This festival of lights brings the Father of lights to the hearts of His beloved chosen in a most profound way. ” ????????❤️

Speaking about predictive programming, Expat Gal, give this public fb post a view and a listen; from a show called ‘Utopia’ (of all things). Thanks for your diligent labour, from Canada here and I appreciate your work and work from all posters here on Z3 News. https://www.facebook.com/dave.nash.14606/posts/436436957371769

Hi Lise – You are very welcome. ?. I had heard about “Utopia” but not seen this clip. Wow! Very true!

Bill Gates did a TED talk years ago bragging that “if we do really well with the vaccines, population will drop…..”. ?. Right in our faces….

I published an article awhile back showing that there were substances to reduce reproductive abilities in the tetanus shot and other vaccines, particularly those being used in India & Africa. The HPV vaccine causes a major reduction in fertility as well. Evil people “playing God” with people’s ability to have children, unbeknownst to the masses….?

Very interesting find. We’re now just about one month from the inauguration but sounds like this is a long way from over. A court ruling to reverse seems likely to ignite violent protests.