You are here: Home » Prophecies » “This nation is as a high flying plane reaching to the heavens that will suddenly go into a tailspin from which it will not recover.”
Share this post: 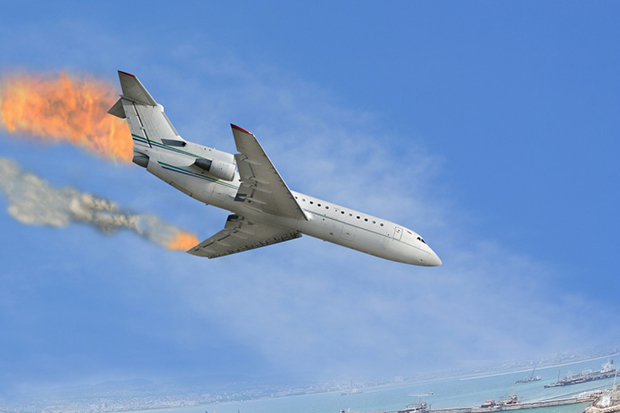 God has laid the following word on my heart even as He readies Himself to spue the lukewarm church out of His mouth.

“The leaders of My people who have taught My sheep to err have an appointment with the Most High. I will require it of them. Those who have not sought out My truth and have not prepared themselves or My body for My return are going to be stripped naked in the sight of all.

I tell you of a truth, there are many preachers and teachers of My word who have erred from the faith that was once delivered to the saints. They have not contended for My truth. Did I not say in My word to earnestly contend for the faith? (Jude 1:3)

Things are going to change suddenly. Those who are prepared will not be caught off guard, but many in My body will be swept under by deceit. Even as they have not represented My truth, I will allow deceit to have it’s way with them unless they repent. Sudden change is coming to this nation and the church. This nation is as a high flying plane reaching to the heavens that will suddenly go into a tailspin from which it will not recover.

As this nation is, so is the lukewarm church. She has long since abandoned her first love and has sought out many other lovers. She has built for herself great cathedrals. But where am I? She has erected many edifices to herself. But where am I? For when sudden destruction comes ; and it will come though I am longsuffering , your church leaders will not know where I am. For the people will say, “Where is God? Why did He let this happen?”

My remnant in whom I have entrusted My holy word will know where I am and they will lead the lost and broken to fountains of living waters.”

I also received the following dream on May 22 . I was on a ship in a body of water, attending a Christian conference. Instead of preaching the word, the leader of the conference was asking the attendees to sing a song of their own choosing, whatever was on their heart.

As the meeting continued, I noticed dark waves starting to hit the ship. Then the waves got higher until they completely came up over the ship. Then suddenly without warning, it went completely dark.
No one was offering up solutions as what to do. The leader of the conference was eerily quiet. Sensing we were going to be engulfed under if someone didn’t do something, I spoke and said, “We have to get back to the shore quickly.”

As we started back at full speed, the lights came back on and I became aware of my surroundings. I looked out into the water and I could see many other ships , all different sizes, racing back to the shore.

Interpretation:
I believe the conference and the leader represent the current seeker-friendly church, striving to be relevant to the culture. David Wilkerson referred to this as the “gospel of accommodation” because it adapts the gospel to appease sinners. The conference attendees were being encouraged to follow their own hearts and not the truth of God’s word.

The different ships represent churches and ministries. The shore represents Christ, the true light. I believe this dream confirms that many Christian leaders will fail to offer answers in the difficult days ahead, but God’s remnant will arise and lead his people back to truth.

Beloved, when I gave all diligence to write unto you of the common salvation, it was needful for me to write unto you, and exhort you that ye should earnestly contend for the faith which was once delivered unto the saints. (Jude 1:3)

15 I know thy works, that thou art neither cold nor hot: I would thou wert cold or hot.
16 So then because thou art lukewarm, and neither cold nor hot, I will spue thee out of my mouth.
17 Because thou sayest, I am rich, and increased with goods, and have need of nothing; and knowest not that thou art wretched, and miserable, and poor, and blind, and naked:
18 I counsel thee to buy of me gold tried in the fire, that thou mayest be rich; and white raiment, that thou mayest be clothed, and that the shame of thy nakedness do not appear; and anoint thine eyes with eyesalve, that thou mayest see.
19 As many as I love, I rebuke and chasten: be zealous therefore, and repent. (Revelation 3:15-19)

the picture reminded me of this post and picture.

This was posted on Steve Quayle’s site.

appartently doing this on Monday.

If this happens on Monday, it might be the trigger event for the steep drop I saw. However, I saw UVXY going up to only $15.00, so not I am not expecting it to be a massive crisis.

Hi James,
I would assume that it should be the proper point to long the market, to long the oil and to short the silver when uvxy hit 15.00.

I don’t have that much precision. I believe what I was told was to watch for a rise in silver close to the time when equities drop, so it might be shortly afterwards. I am not expecting a huge move up, but significant enough to mention it, so I would guess at least 40 cents. That is the entry point I am watching for. There is often a lot of volatility on days when the Fed makes rate announcements, so this Wednesday is one to watch.

give this a read folks,

Dawn Obrien 37:50 The shaking has begun. More coming, will get worse.
1:01:20 this afternoon the California coastline will shake, the judgement of the LORD has started.

I listened to another word from her a few weeks back that was posted on Z3. It warned of a soon coming earthquake. Does she have a good track record of accuracy?

She did say that “all calamity begins thus week”and then 9 hours later was the Arrianna Grande bombing. Not sure on anything else.

Could someone help me out with the interpretation of “hot cold, and lukewarm” believers. (According to Rev.3) Could we be just making an assumption that everyone has the same understanding?

Interview with the “Web-bots” Cliff High. Cliff correctly foretasted Bitcoin’s breakout. Calling for $4800 gold by Feb 2018. It’s not gospel but it is worth listening too. Gold comments at 14:40 https://www.youtube.com/watch?v=ohqKmAz_aeM

“Things are going to change suddenly.” I believe this word is true, it’s just so vague. In a nation that’s 240 years old, a 10-yr collapse is “sudden”. Reminds me of Jesus saying He is coming soon. I’m sure when He comes – for all but a few it will be too soon! And when this nation collapses, however long it takes to happen, it will be too sudden! God have mercy.

Jesus did indeed say, “Behold, I come quickly.” It’s one of the last things he said in the Book of Revelation. Many well known evangelists including Lester Sumrall and Aimee Semple McPherson preached a Holy Spirit inspired message of “Jesus is Coming Soon.” I have no doubt that God is sometimes vague on purpose. The impression I am left with is to live our life in a state of readiness so we will be prepared whether we live to see his return or whether we die tomorrow. I believe it’s the same with sudden change. It could happen abruptly or over a period of time but the message he has impressed upon my heart is to prepare, meaning to have my heart right with God.

Like you commenters, I’ve been
frustrated by run ins with blasé,
Ostrich priests or pastors. One
Priest scorned my informing him about
the Bible Codes; yet he had an
Evolutionist speak.
But on the other hand, as I delve
into Pre-Trib Rapture Posts I soon
come across disheartening Legalists
who trust in themselves that they
are righteous, rather than Bible
promises. They trust that they are the
Cream of the Crop Believers who
will go up in the Rapture while most
others remain behind. But a South
Korean Christian, a Catholic Saint,
or Martin Luther-before he was saved-
could draw an exclusion line on them.
Do they pray hours on end each day
like Luther did, trying to merit his way
into Heaven? Just two Bible verses
blow away their cobwebs: John 5:24
and the climax of Romans 8:30,
“…and whom he [Jesus] justified,
them he also glorified.”
The Rapture is going to Heaven
in a raised, physical body and Jesus
gave all those “..and I will raise him up
at the last day.” promises in John 6.
The Blood of Christ, the better New
Covenant promises allow us into
Heaven, not our always faulty
Performance. The Ten Virgins,
will be Jews at the Rapture, who
have Scripture Lamps but no New
Birth Oil for the Five Foolish Virgins.
The Matthew 7:21-23 souls will be
Legalists, who appealed to their own
doings, not Christ’s mercy. Christ
NEVER will have known them.
Lukewarm or carnal Christians
don’t go around prophesying Etc.
Christ showed a Pastor that many
thriving churches were but leading
their members to Perdition because
“they were making light of the Blood
of Christ.” Not because they weren’t
pure or zealous enough.
Paul E. Lindquist

Lydia, after reading this vision that the Spirit showed you, I was reading an article on a signs of the times website in which 5 financial experts were talking about the stock market crash which some were saying is ‘certain or positive or never been more sure of in their life’ or words to that effect, and that financial ‘crash’ may be part of this picture… but like you said is that the crash of christians seeking Him is the worst part that precipitates all of it…
Blessings and shalom in our Mashiach, Yahuwshua
Thomas Nodoubt

Heads up that June is LGBTQ pride month. Pray for these people to come into the kingdom and pray for the protection of Christians.