You are here: Home » News » Asteroids » “I saw many asteroids falling from the sky with long red tails.” 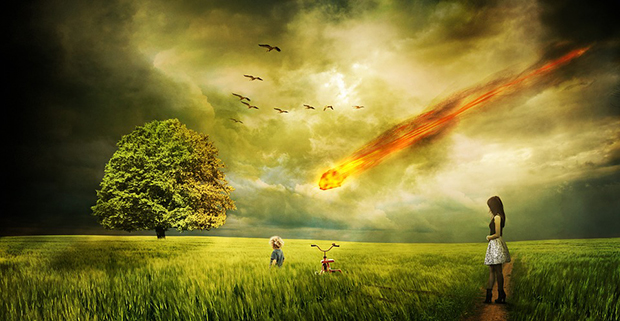 On January 1, 2018, I dreamed we were in a bunker and I was in the shower. The shower had a small window in it. As I was about to get out of the shower, I looked through the window and saw many asteroids falling from the sky with long red tails behind them.

Suddenly the scene changed and I was suspended above the earth watching a massive meteor racing really fast toward earth. Then I was back to where I started, and was getting out of the shower where I found my husband waiting on me. We decided to leave the bunker.

As we were walking, we saw three distinct groups of people exhibiting three distinct types of behavior. The first group were staunch religious people. They asked us what had just happened. We began to explain to them the events by using scriptures, but they repeatedly told us, “We’ve been told we would not suffer during the tribulation by our pastor.”

They became very angry with us and began cursing at us, so we left. We encountered another group that began celebrating. Singers were on a stage singing and dancing. The crowd was cheering them on as they drank, heavily.

The last group we encountered were youth. They were the only receptive group in that they began asking us questions and were genuinely interested in what scriptures revealed about our current circumstances. End of dream.

Thank you for your post. I have seen a very similar vision of fireballs falling on Central Texas.
The details were posted earlier on z3new.com.

INTERPRETATION OF YOUR DREAM:

The three groups of people represent those who we will encounter in the great harvest during the time of the tribulation as various judgments of God befall the peoples of the world.

1. There will be the religious people who will be so steeped in their dogmas and traditions that they will not be able to hear the truth and will be lost. Their hearts are hard and will not be changed by the Gospel or the
Truth.

2. The second group represent those who are of the world and totally lost. They choose to ignore God’s warnings and prefer to eat, drink and be merry for tomorrow we die. Their hearts are hard and will not be changed by the Gospel or the
Truth.

3. The final group represents those who will recognize the hand of God in the various catastrophic judgements of the last days. Their hearts will be changed and will be ready to receive the gospel, repent and be saved. You mention that these are youth. I believe that they are new babes in Christ. Needing the milk of the Word.

Finally, you and your husband were not harmed and God gave you opportunity to speak the Truth of God’s Word to all three groups. This reflects that there will be His Laborers in The Last Great Harvest Field that are not killed during some of His end time judgments, but protected and directed in the work of The Last Great Harvest.

May God bless, guide and protect all of the true believers who see these events and go forth to bring in the harvest.

Lester, may I ask where in Central Texas? I live in Luling, approximately 45 minutes south of Austin.

Thank you Sister Ivette , this vision is the same as what the LORD told me in Jan. of this year with confirming signs . This large meteor breaks into at least 3 smaller meteors and thousands of bus size to baseball size and while the meteors hit all over the world , the United States takes the worst of it . One large meteor hits in the Atlantic , one close to the Gulf of Mexico and one off the west coast of Canada . This event the LORD is telling me is close . Blessings .

Yes, it’s close. I had a similar dream a month or so ago. The Lord said “This feast will come in festal wrappings” meaning, I think, that it will come during one of the Hebrew feasts. Which year I don’t know but I’m on the look out at every feast now.

Yes indeed Ivette have had a few similar visions recently, time must be drawing nigh. Upon meditating/praying on scriptures b4 I went to bed, I had a very lucid vision of many meteors coming and saw to take refuge outside of Houston, TX. Then there were multiple planets in the sky that were so close and huge like never before seen and then I was hiding behind a huge mountain and chaos ensued with many cars backed up on the highway. Have also seen these meteors and planets to come are a major forewarning to a pole shift and megaquake Rev. 6:12 that signifies the end of the age/rapture/son of man coming in the clouds with great glory. Its quite possible all 3 happen somewhat simultaneously. The most vivid vision ive ever experienced was nibiru/red dragon/red kachina/planet x appearing in the sky then a megaquake and simultaneous pole shift which literally shifts us into the new age new heaven new earth and my body changed in a twinkling of an eye as did the dimension/realm and landscape. It was much brighter and incredibly high def and sharp vivid colors in the changed but similar landscape. My body felt and appeared to be a light body magnificently glowing and I felt as if I had super powers with the biggest 😃 on my face! Both the scariest and most amazing vision/experience ive encountered to date. In another recent vision, I saw chaos in the streets and told a friend that the huge blood red planet in the sky was Nibiru. Its massive size and electromagnetic pull is what will cause our poles to rapidly shift (In fact are shifting now) like a spinning top the closer this planet orbits near us. Hence the whole climate gate fraud and rhetoric, TPTB know… Read more »

Daniel 2 tells us that the last kingdom of Earth will be destroyed by a rock (asteroid) before God’s kingdom would come on the Earth.

Revelation also tells us the stars in heaven will drop onto the Earth and one particular star will smash into the earth and open the furnace below.

Yesterday I listened to the TruNews report on Russia giving their final warning to America. When they mentioned Russia’s missiles equipped with MIRVs, I thought of this post and wondered if the red tails belonged to missiles rather than meteors. Then I saw a comment on https://z3news.com/w/multistage-inter-continental-ballistic-missiles-flying-skies-americas-rural-country-areas/ also suggesting the similarity of missiles and meteors! Both looking like incindiary fireballs.

I have not seen this talked about anywhere, though I feel sure it must have been…was the “nor’ easter” a result of Billy Graham’s death? A whirlwind that came from heaven at his departing? Hasn’t that happened in the Bible-maybe Elijah’s departure?