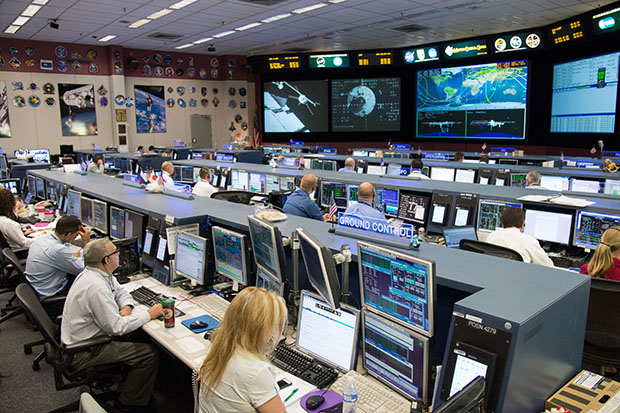 In my early morning time with the Lord I heard, “Houston, you have a problem.”

Needless to say, my prayers were directed.

The Remnant of the Lord who remain in Houston (and environs) need to seek the Lord as to where to relocate, and do so while there is yet time. If they do not, soon they will merely be able to flee in the clothes on their backs.

Some have been (and remain) fearful, because they don’t see themselves has having the means to move. Is it not in our trials that our Lord can show His bounty and love for us? We Americans (especially, but not exclusively) are used to the idea that we can do everything for ourselves … and if we cannot, then it is not to be; and if we cannot see how WE can do something that we think the Lord is leading us to do, we question whether it was really the Lord’s will for us to do it.

Corrie Ten Boom told the story about her father not giving her the train ticket until she was about to step up into the train car. Commit to doing whatever our Lord directs and He shall provide the next step. We need to stop thinking that we have to do everything by our own might. Where is God’s glory in that?

Jim Kermott, an “Army Brat”, was born in Germany and raised in Okinawa, Panama, and several of the United States, as part of a Roman Catholic family. It was on Okinawa that the missionary nun who taught his First Communion class invited him to have a personal relationship with God the Father and with our Lord Jesus Christ. At Fort Bragg, North Carolina, he was baptized in the Holy Spirit at the time of his Confirmation in 1965; nobody told him it was “just something Catholics go through” and he paid attention to all that teaching about what the Holy Spirit did for the Believers at Pentecost — the Charismatic Renewal was getting started up in Ohio at that time. If asked (and sometimes volunteered), he will tell people who insist on labels that he is a “transcended catholic”, and that it is our personal relationship with God that matters. Jim has always had a heart for encouraging people where they are, and especially to get closer to God.

I used to live in Houston in 2015 then relocated to dallas. I hope dallas is spared

A web site “NETS OF HOPE” has also received from the Holy Spirit that Houston will be a dead city eventually.

CONFIRMATION Mr. Jim!!! Last year around August the Lord told me in my prayer closet he was moving me out of the Houston area. He said it would not be safe to stay here in the near future. I needed to start packing. So I told my Mom (who I take care of) what the Lord said. And I started. Got boxes and went thru closets (found things I thought I lost) praying the whole time, “Lord where am I going”??? Had a pen and paper by my bed just in case the answer came in the middle of the night or possibly a dream. Then in October it came. So little by little he said give the things away you would want new. So out went the couch, the entertainment center (gave to the vets who flooded in Harvey) out went the sewing machine to my sweet friend who flooded… I am down to very little. Pantry packed at all times as I go to the box for what I need to cook. Recently He said in one hour and a half I will have you out of there coming soon. Dog, cat and Mom loaded to go!! He also said not many would have my faith to do what I have done and there will be a great Ministry ahead of me for my heart and faith is what he will need in the coming Chaos! Get ready peeps…. the Lord is coming!!

do you think this could be something in space coming too?

Also a Houstonian and have been showed to relocate back home to Kansas. This article a confirmation as well as many signs and visions. Houston we indeed have a problem and Nasa will not help resolve this 1. Meteors, asteroids, planets, tsunamis, megaquakes, pole shift to come as foretold in the gospel. Red dragon being the red kachina/nibiru/planet x nemesis system is what causes the late seals trumpets and bowls. Repentance, prayer, and refuge where the Lord directs you will be key in this season amongst us. The poles are shifting as a matter of fact right now look it up. Meteors are hitting, volcanoes erupting, earthquakes rumbling, extremely abnormal weather, animal die offs is all happening. Please prepare accordingly for the Kingdom of Heaven draws near. The Lord showed me to come to Houston from Oregon to get baptized at my moms church. No job lined up little money and 30 hrs later i arrived in Houston. Oh should have prefaced that my hometown sweetheart who led me to Christ had just left me out of the blue leading to the move. She recently told me she wanted to marry 2 mos before and got ice cold out of nowhere. This wasnt the first time however. The first time i met her mom she placed a curse on us and got a similar reaction from my honey that time and later we found out her mom cursed us. This time around it was a Jezebel curse and wow how unpleasant of a spirit she was. I didnt realize it at the time although i had visions of her mom practicing voodoo on us again not long before it occured. Anyhoo her departure led me to Houston and getting baptized, so gift and a curse truly. I do got her ring waiting and have deep faith. Rev 2 the only thing i have against you is you left your 1st love. God revealed this to me shortly after and i knew it was time to get baptized and stop putting so much into the worldly desires and forgetting about my 1st love being God. Lest we not forget to keep that faith in what really matters. Blessings to you n yours in Jesus powerful name!

When Planned Parenthood opened their super center in Houston, many articles claimed it was the largest abortion center in the world. No doubt this is one major reason that city is scheduled for destruction. And not the only one. Henry Gruver, the prayer walker, told a story where he questioned God about why he was told NOT to pray over certain places. God’s reason was so that evil could be drawn there and eventually be dealt with. Selah.

Yes. When Houston flooded last year that was what was put on my heart… The Planned Parenthood center… In an old bank building eerily resembling a pyramid. I believe it flooded seven years after it opened.

Jim – your exhortation to faith is very refreshing. So many people are afraid to make a transition without having a parachute. To the world this seems like wisdom, but there is no faith required when you think you have it all figured out…having a job in your new destination already, etc. Without faith it is impossible to please God, and stepping out in faith requires exposure and vulnerability.

You are so right on…your corrie ten boom example is poignant and astute. This is exactly the type of faith that we need at this time. It is utter foolishness to the world, to fire first before aiming, but when we are counting on God He never lets ua down. He covers His children when they trust fall into Him

Thank you, mem … but I have to say that any wisdom is God’s.
I’ve tried my own wisdom, and boy-oh-boy, did I ever mess things up!

I have lived in the Houston area almost my whole life. The Lord has shown me this flood that is coming that will destroy Houston and many surrounding cities. I have been warning people the last couple of years, but few, believe it. It will come suddenly, people will be caught off guard. I have family members that still live in Houston, I pray they wake up and leave.

I can testify of this, too. Years ago God showed me my house in northeast Houston that did NOT flood during Harvey was 7-8 feet under murky green-brown water during a future disaster that had completely blown the glass out of the windows because the window over my front door (8 feet) was glassless and wide open at the level of the water. I had no idea what had caused the massive flood and I do not know if the dirty water was fresh, brackish or salt water. I only saw the destruction. My street miraculously fully drained during Harvey, never pooling water, and would probably need an additional 30-50 feet of water over and above Harvey to flood to that depth. A friend’s son had a dream their home in my neighborhood was hit by an enormous tidal wave from the ocean.

I believe this. In mid-January out of the blue, God let me know it was time for our family to be moving. I got to work on the house almost immediately. Listing pictures are being taken next week and we have no contract on another house but we are looking an hour northwest of downtown Houston in the country and God has assured me He has got this and is preparing a place for our family. I shouldn’t be surprised to see this word on Z3 as I’m currently living it this moment but it is still a shock.

Hi Tex an hour north of Houston will not be far away enough to be safe. There is a lady named Pamela who put 2 posts on Z3 last August and last September about this tsunami going all the way up near Centerville Texas. The title of that post is “I Saw Tsunami Waters Covering Highway 45 Between Dallas And Houston”. That would be a huge tsunami that would destroy Houston and many cities north of Houston. The Lord has directed me to go to Kerrville.

I know that the prophet Sadhu from India has said that Houston would be destroyed by water again a 2nd time.

Jerome L
Reply to  Robert B

And I believe he said that the next time it will be utterly destroyed.

George W
Reply to  Robert B

Hi Brother Robert could you provide the link to this prophecy that Houston will be destroyed by water a 2nd time?

Robert B
Reply to  George W

George on YouTube you need to !ook for the December episode of the Jim Bakker show with the prophet Sadhu as guest. December 2017.

George W
Reply to  Robert B

Thank you Robert. I found it. The link to it is titled “A Must Listen – Day 2: Dearly Beloved Jim and Lori Bakker with Dearly Beloved Sadhu Sundar Selvaraj“ https://youtu.be/j5dmPQoap-Q

It is so disheartening that God has to deal with the city of Houston again and this time Pastor Sadhu used the word destruction. “The Lord says it is because of all the cries of the babies.”