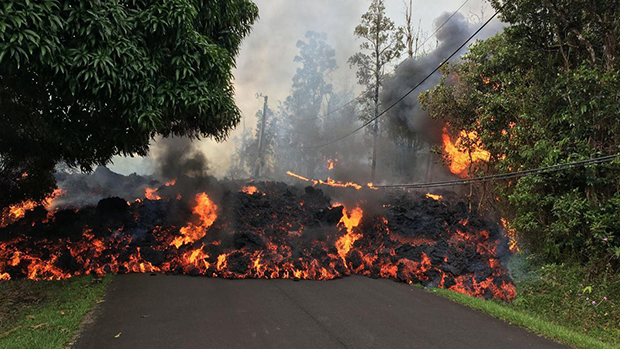 The second dream I shared in a post on April 18 seems to be happening now. I have been watching the coverage of the Hawaiian volcano and it is doing to the earth exactly what I saw where the ground was opening up and flames were coming up.

In this dream, I was with some younger women whom I was not well acquainted with, but we had a friendly relationship. They appeared to be single women who lived in a high rise apartment building. I was outside with 1 or 2 of them when the ground began to shake and rumble and then began opening up.

The way it opened up was different than the first dream. It was like a flower blooming. In other words, it was breaking open in areas and the parts that were opening up rose up from the ground and out of these openings in the earth, red flames were rising up. This anomaly began spreading all over the area.

I told the ladies, “We must reach safety immediately.”

So we went to one of their vehicles and were driving around these firey areas, quickly trying to leave the area. End of dream. (see complete post)

I also shared another dream in that same post regarding an earthquake striking and causing the ground to split open in an urban area.

I had a similar dream just a few weeks ago. Orange, yellow, red, a huge ball of “something” in the distance, on the ground that was suddenly rolling toward us. The people with me, along with myself, could literally FEEL the heat, and when I woke I knew the dream was from GOD. And I seldom have a God sent dream!!!

Must be somewhere else because there are only a few “high rise” buildings in East Hawaii. They are all in Hilo on the oceanfront, far from the erupting volcanoes. West Hawaii (Kona) has more but Kona is also far from the eruptions.