You are here: Home » Prophecies » America Under Attack » “Groups of men with machine guns and hand guns were shooting people who were trying to flee.” 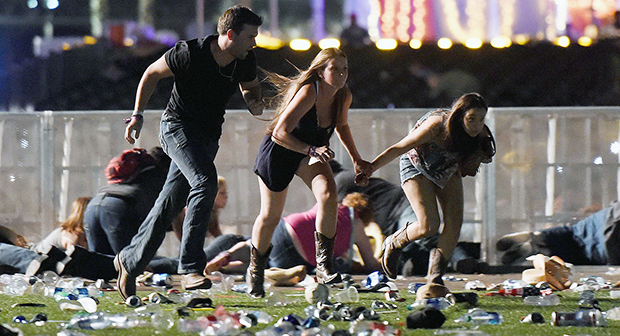 Over the past ten years, I have had a few dreams about our nation and our city being attacked by the enemy. It wasn’t until I started reading about other people having very similar dreams that I began to wonder if these dreams were from the Lord to warn us. I have hesitated to share them because they can be quite scary. At first, I found myself actually trying to prepare mentally for something like this to happen, but I have come to the conclusion, I don’t know if we can prepare mentally for something like this, so I have focused on prayer and reading scriptures to find comfort.

On the morning of September 13, 2019 I dreamt that my daughter and I were walking by the side of a street, on the grass as there was no sidewalk. Then we saw a dark colored utility van pull over on the side of the road in front of an intersection. Then a big guy of middle eastern descent jumped out and opened the side door of the van. He was laughing the entire time as he strapped on a rocket launcher and proceeded to shoot black missiles all around causing great chaos and destruction. Several times, he looked directly at us, laughing the entire time. While he was shooting missiles into buildings, several other groups of men with machine guns and hand guns were shooting people who were trying to flee in their cars or running away. As in my previous dream several years earlier, I knew in my spirit that the enemy had taken over the airports and all major roads coming in and out of the city.

I looked around and realized we had nowhere to run, so we laid down on the grass to avoid getting hit by the missiles and bullets. We were laying on the ground face up and I had my arm around my daughter with her head tucked under my arm pit.

After a short time, the man launching the missiles walked over to us and said to me, “Prepare to die.” He then placed a gun on my right temple and pulled the trigger. A moment before he pulled the trigger, I looked up to the sky beyond his face and saw a MULTITUDE of faces in the sky looking down upon the scene. I saw them from the chest up and they were all wearing white. In my spirit, I knew these were the faces of people who had been martyred previously. They had a look of concern, but not fear.

At the same time, Revelation 6:9-11 came to my mind, “When he opened the fifth seal, I saw under the altar the souls of those who had been slain because of the word of God and the testimony they had maintained. They called out in a loud voice, ‘How long, Sovereign Lord, holy and true, until you judge the inhabitants of the earth and avenge our blood?’ Then each of them was given a white robe, and they were told to wait a little longer, until the number of their fellow servants and brothers who were to be killed as they had been was completed.”

In those very few moments before he pulled the trigger, I knew they were not killing the young girls as they were intending to use them as sex slaves. I wanted to tell my daughter to stay courageous, but I never got the words out. I felt no fear for me, but felt horrible about what my daughter would be facing.

As with everything else you read or hear, please take it to the Lord. In a previous dream I had, the Lord told me three times, “PRAY, PRAY, PRAY!!”

Kate P grew up in a Christian home, in a small town in the Midwest. Her primary spiritual gifts are intercessory prayer and encouragement. She and her husband have one daughter and two amazingly adorable cats.

Wow, Kate P. Your dream really hit me in the gut and verifies the unsettling feeling I have in my soul about war coming on American soil in the next decade. Understand where you are coming from when you say you are hesitant to tell people what you dream. It is scary. Christians are under attack. Christians will be targeted like Americans have never seen before on our soil. Yet, we must warn others. Who else will tell the truth of what is to come? Not the lame stream media. Not those that are still asleep. Not even most Christian pastors, preachers, ministers or lay people. It is coming down to the Remnant that is alive right now. God Bless you and others who are courageous now and in the days to come.

WOW , In almost 5 years I have never read or heard of another Dream that seems so close to the Dream I had in 2015 that was posted here https://z3news.com/w/prophetic-dream-reveals-safety-attacks-found-altar/ This is coming but like I said in the article I don’t know if this is before or after the Rapture, not sure how much we will see and witness before the Rapture. Either way it will be a time of GREAT persecution like never before and if this happens suddenly there will almost be no time to prepare spiritually, the time to prepare is NOW! The fear that the unsaved and ungodly will feel from this should not be the same fear the Body of Christ feels, IF the Bride is still here when this is happening they will look to us for strength and ask us what is this supernatural peace and strength we have and we will be able to witness to them and draw them into the Kingdom of God! I don’t believe there will be many warning signs before this sorta events start because in my dream “ THEY” had been beyond planning this for a very very long time. Oddly a few months ago there was a story that broke in Alabama of Terrorist Camps that had been uncovered in Alabama, The exact state my Dream happened in , although in the dream I KNEW it was happening everywhere in many other states . Here is a link to the News Story http://abc3340.com/news/nation-world/fbi-uncovers-homegrown-terror-training-camp-in-alabama When I read this article it literally brought chills down my spine and I KNEW this was God exposeing and Warning that this dream may be closer than we know, but I also knew there were thousands more all over America that have not been “ Uncovered “. God help… Read more »

Tracie, what a powerful dream. I totally believe it was from the Lord. I believe it is coming, and the most important thing right now for all believers is to know the voice of the Spirit and learn to obey Him. The altar to me represents staying in the secret place of intimacy with God (the wise virgins who kept their lamps filled with oil) – these will be safe staying under the shadow of the Almighty (Psalm 91) when the stuff starts to hit the fan…

This was posted today under Israeli news live:
Thomas Jefferson15 hours ago
I had a dream last night,I was sitting on my balcony drinking coffee,IT OVER LOOKS THE ROAD by my house,A guy in an old blue chevy truck,stops and yells at me,THE MILITARY IS COMING UP THE CANYON,their shooting everyone they see,get ready,their coming right now…THIS is the second time the LORD has shown me ,WE ARE GOING TO BE ATTACKED BY OUR OWN MILITARY…..GET READY YOU GUYS,the LORD doesn’t joke about this kind of thing….HES WARNING EVERYONE ,,,THEY WILL BE COMING…

Hi Kate, I believe your dream is from the Lord. He is warning so many of His children with these dreams so we will be ready for them. Those with children really need to raise them militantly to know the voice of the Lord, and to know His word, like no other generation previously, as children today are facing more than any other generation has ever faced. The time for regular Sunday school classes and regular church services is over. It’s time to prepare for what lies ahead. That is what I always get in my spirit. That we need to follow Jesus and know Him so intimately and closely, and He will protect us and show us what to do. Those who are not following closely will not make it. As everyone seems to say on this site in agreement with how I feel – not many in the body of Christ are saying this stuff. Most are deaf to the times we are living in..