You are here: Home » Prophecies » End Time Prophecies » Birth Pangs » Dream 6: I heard a voice saying, “Remember this man. He will seek to betray you.”
Share this post: 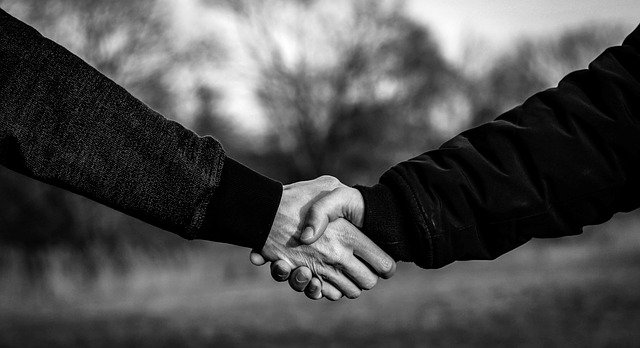 This is the sixth dream in a series of seven prophetic dreams that I received in 2003. This is a continuation of the first five so if you missed those, please see my three previous posts which are listed in the links at the bottom of this post.

I received this dream a few weeks after the fifth dream. It was about a year since all the systems had collapsed. I saw myself living in a high desert rural area, a dry place with rocky ravines and pine trees. I knew many people had already perished so the population was much smaller, but I was not shown how they had died, whether it was from disease, famine, violence or perhaps the first winter.

I saw the survivors were poor and broke but had survived because they had learned to band together with family and neighbors whom they could trust, working together as a local community to help one another defend themselves and their food and livestock. The decent people needed to band together to fight off the bad people who banded together. They had to have people around them who were willing to fight for each other and feed and care for their family if they got hurt or died fighting for theirs.

I saw the federal government was almost non-existent with only a few small enclaves that they controlled. They did nothing to help the people and just protected and fed themselves. The only power they had was in their own minds and the great majority of Americans ignored them, hated them and distrusted them.

The same was true for state governments. Their power seemed to be limited to their capital city areas. Most employees, including state workers, police, medical, even many in the military seemed to just go home after the collapse once it was clear there was no plan or ability to put things back together.

I saw the same things happening in the United States were happening in every nation on earth. Everyone was in the same predicament and just trying to survive.

At the local level, I saw people were much better off if they had a good mayor, town council or sheriff who was smart enough to work quickly to protect their town or county, but I also saw people were worse off if they had corrupt mayors and sheriffs who were bullies who entered people’s homes and took their supplies to be ‘shared’. They were trying to be the boss of everyone, so those were not nice places to live.

I saw cities where people had suffered so greatly that their entire city almost ceased to exist due to so much looting by gangs and warlords who divided the spoils among themselves. After a while when things calmed down and the supplies were dwindling, the warlords and gangs sent out scouting parties to other areas. These scouts went as small groups or individuals to spy out different areas and report back places that could be raided for supplies along with their strengths and weaknesses. These warlords also captured residents by force to work for them as slaves. Those who were able to escape from them suffered from starvation, disease and violence.

I saw a small rural town in a mountain area sealed off the roads going into and out of their town with barriers made by piling together old cars and trucks and other things. This town was very strict about who they allowed to enter. Then I saw the same thing was happening in many other small towns and it seemed to be happening everywhere. Strangers were not welcome for fear they were scouts or carried diseases. The only people allowed to enter these protected areas were those who knew someone living inside, either family members or someone who could vouch for them. It took awhile but some sort of trade was starting to develop between these small communities and towns.

Then I saw myself in a public meeting in a small room, like a school building or community center. I was sitting at the end of a long table with maybe six other people. Each person had some talent or skill to help the community get through these hard times, such as finding and purifying water, hunting skills, food preservation, gardening, seed sharing, medical, security, etc. I was sitting on the end of the table and I was older than the rest of them. I wore a big hat with a brim and sunglasses, but I have no idea why. My skill was herbal medicines, so I was showing them how to help people to grow and make some things for themselves. I knew we met about once a month to help coordinate who needed what help, etc. The atmosphere was to try to help one another the best we could to get through the hard times one day at a time.

When our meeting ended, I left with three guys to a large field that was sort of a meeting area for people to make deals. At this meeting, we were to meet a man who had reached out to us claiming he represented another neighborhood and wanted to set up trade, but we had learned not to trust any strangers or let them know where we lived or what we had, so we wanted to see if this man was sincere before we could start any kind of trade relationship.

No one and no place was totally self-sufficient. We all needed some types of trade whether it was seeds, livestock, medical care, etc.

This man arrived at the meeting area shortly after we arrived. He had probably been watching for us from the tree line. He seemed relaxed and very friendly as he smiled and greeted us. Likewise we were all friendly to him as we introduced ourselves with alias names to hide our identities. We all shook hands with him, but the moment I reached out to shake his hand the scene froze and I heard a voice saying, “Remember this man. He will seek to betray you.”

I understood this warning was not just for me personally but that this man would betray our community. So with the scene frozen, I studied his face, the shape of his body, his proportions, clothing, hairline, eye color, how he smiled, his jawline, and his ears. I burned every detail into my brain from all angles. I was given a ‘knowing’ about him that he was a scout, which was called a ‘hunter’. I knew he worked for some bad people who were looking for small communities and neighborhoods as easy pickings. They had assigned him to make friends with us and to see what we had and what kind of defenses we had and to report back to them if he found any groups of christians. They had promised to give him a bounty whenever he found Christians and reported their location. I thought this was odd and did not know why it was a factor.

Then the scene unfroze and I knew I had received a warning from God so I gave a signal to my friends that we were not to trust this man. From that point on, we talked and joked with him pretending like we wanted to trade and acting like we needed exactly what he said he needed to make him think we were broke and desperate. We told him we would have to talk to our town council to see if there was anything we had that he might want, so we agreed to meet again in a week and we left on very friendly terms like we couldn’t wait to see him again.

When we left the meeting place, we purposely went in a totally different direction than the way back to our place and continued for a mile or so until we were sure we weren’t being followed. I knew other communities were doing the same things, hiding their exact locations and never giving out directions to any strangers. Everyone knew that was dangerous and could result in being raided and burned out.

Back in 2003 when I received this dream, I was living in a small town with a lake and never had any plans to leave it, ever. Then ten years ago, I moved to a very rural mountain area and this is where I still live today. After living here for a year, I was driving through the pass when I recognized it was the same place I saw in this dream, a high desert with rocky ravines and pine trees all over.

Also, in the dream I saw myself wearing a big hat with a brim and sunglasses, but I had no idea why. Since then, I had to start wearing a dark gray boonie hat everywhere and sunglasses even indoors because the light hurts my eyes.

It’s now been 18 years since I had this dream but I can still close my eyes and see that man clearly. It’s funny because now I’m in my late sixties and legally blind, so I can’t see details or read but I know 100% that if I met that man and shook his hand I would recognize him instantly.

I believe the warning from this dream is obvious, there will be dangerous times and dangerous people who will try to hurt or take advantage of us so we should not be too eager to trust strangers no matter how friendly or what they promise. Just as I was doing in the dream when the scene froze, we must rely on God to give us discernment.

Here are links to the other dreams in this series:

Dreams 1-3: “Remember this. When you see this happen you will know IT has begun.”

Dream 4: “I saw New York City and it felt like it was about two or three months after the collapse.”

Dream 5: “I saw the west coast of the United States had been invaded by the Chinese military.”