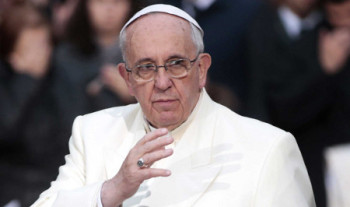 In my previous post I listed Ten Disturbing Facts About Pope Francis. Thanks to visitors to this site, I continue to learn about more disturbing facts.

Like the old saying, “truth is stranger than fiction”. These facts include really strange connections between Pope Francis and the numbers thirteen and six. Any one of these alone would be too trivial to have any meaning, but the repeated occurrence is enough to at least make us wonder. Could these be clues revealing his true identity?

So who cares about all the thirteens? Here are two possible explanations.

Second, the number thirteen is believed to be symbolic of rebellion and lawlessness. Some people claim this association comes from the fact there were thirteen people in attendance at the Lord’s last supper, where he was betrayed. Others point to this scripture:

Twelve years they had served Chedorlaomer, but the thirteenth year they rebelled. (Genesis 14:4)

Also, ancient Israel had seven righteous kings, but endured the reign of thirteen evil kings. Many people try to avoid associating themselves with thirteen. Many office and apartment buildings have no 13th floor, and hotel rooms sometimes avoid having a room numbered 13. Many people believe it is a bad omen when the 13th day of the month falls on Friday. Whereas the number twelve is easily divisible, there is no way to easily divide the number 13, which makes it stand alone as if it is refusing to cooperate with other numbers.

God created man on the sixth day of the week so the number six is associated with the number of man. This is usually a negative association because it represents man’s reliance on himself rather than on God. God appointed six days for man to work, but the seventh day as a day of rest. Similarly he appointed six years to harvest the land, but the seventh year the land is to be allowed a year of rest.

All of these things could be just strange coincidences or they could be more clues revealing the identity of the false prophet. I honestly don’t know yet, but the more of these kinds of things I find the more convinced I am that Pope Francis is at least a strong candidate for the position of false prophet.

Thanks to Frank for posting these facts in a comment on a previous post. He also shared a link to the site where these facts came from.

we have to be open minded about whether the Pope is indeed either the Antichrist or the false prophet, foretold in Revelations. At this stage, it is difficult to say, whether he is or not. Jesus said to us to “Watch” and that’s all we can do, as, at this stage, it’s pure speculation. But having said that, certainly this Pope is very different to previous popes, that have come and gone, but it could be just setting the stage, so to speak, for the Real thing, when it arrives. The world is becoming conditioned to these more way-out statements that the Pope has made, and this could, possibly, be “conditioning” for someone else to appear, even more blatant and outrageous in statements that disagree with the Bible. People thought that Hitler was the Antichrist ,and he was backed up by the Vatican ,but it wasn’t to be. But with the state of the world today, it can’t be very far away, Our Lord’s Return so we should as Jesus said, “watch” Follow the news, look up websites, pertaining to this and see what happens

Some time around 2013. I had a little dreamlet, as I call it, that showed a dollar bill. That was it. I woke up and got a dollar bill out to look at it. I had seen much of the research done on the occult ‘charms’ of the dollar bill and understood that very well. What I learned by the leading of the Holy Spirit was to fold the dollar in half so that the two seals on the greed, ha! I meant to write green side, where directly upon each other. What? I opened it again and pondered it for a few minutes then saw something amazing. The circular seals contain the pyramid on the left and what looks to be an eagle, but more as the motif of the phoenix bird rising out of a shape of a cup. As I looked at that, I saw the the reproductive signs of male and female, folding them over, one over the other brought a union, so to speak. I turned the bill over to the other side and saw the egg, or ovum in the oval that the presidential head is in, identifying Washington, but more than that it represents the presidential office, the oval office. What I believe is depicted on the dollar bill is the Osiris(male) pyramid, the Isis cup and monstrance by way of the crown she is depicted wearing in mythology, a receptacle for the sun, and on the other side the ovum, or birth of Horus. Another manifestation is in the Bible as Nimrod, Semaramis, and Tammuz. I learned recently by watching a you tube, that Rob Skiba calls dollar bills, Nimrods. Just think about how far and wide the dollar bill is used, how many pockets it goes in, and think again that… Read more »

Please stop posting these “facts” about the Pope. Don’t listen to the flat out lies the media says. Pope Francis IS NOT the Antichrist. It is really sad that Christians will attack their brothers like this.

No one has suggested that he is the antichrist. However, he appears to be a strong candidate for the second beast, the false prophet. The Bible instructs us to be on the alert, watching for these things because the false prophet will be a dangerous threat to millions of people. He will rely on deception, disguised as a lamb, to lead multitudes to hell. These posts are an attempt to expose the deception in the hopes of waking up some of his victims before it is too late for them. These posts do not make any accusations, but rely on statements of fact, which are all well documented and not debatable. Each person can then decide what to do with the information.

I truly believe that Pope Francis is the beast. Implanting all Americans with micro-chips did not come up in the media until after Pope Francis was elected in 2013. I would never follow that Beast, I would rather die than burn in hell following that scum. What do we expect from the Roman Catholic Church, who has deceived the world by having people worshiping the beast on SUNday instead of worshiping God on the 7th day Saturday (Sabbath). Pope Francis is the beast and President Obama is the Antichrist.

I read some of the stuff on the Pope and the number 13 when he was first elected. I got interested and started researching about St Malachy and other ‘Catholic propehcies’. Some I concluded are inverted prophecies. This pope could be the martyr Pope in some of those prophecies such as Fatima St John Bosco, Maria de Agreda and others. The next Pope which is elected in an non canonical way almost immediately due to the violence is claimed to be the ‘Angelic pope’ whom I rather suspect to be the False prophet. This angelic Pope is to strengthen the Catholc religion and crown a great monarch, most likely the Anti Christ. I also think there is a lot more prophecies yet to be fulfilled before the False prophet and Anti Christ show up. These are my guesses, just guesses.

Just to provide a tidbit on the number 13 related to the U.S., I heard Derek Prince state that there is a spirit of rebellion over the U.S. There were 13 original colonies, the U.S. Dollar has the number 13 repeatedly. There are 13 stars above the eagles head, 13 steps on the Pyramid, 13 vertical bars on the shield, 13 horizontal stripes at the top of the shield, 13 leaves on the olive branch, 13 arrows, 13 fruits, and 13 numbers.

Wow, that is amazing! Thanks for sharing that.

The Movie “Oblivion” Tech 49 is rebellious and questions his orders. 4+9= 13
His follow-on Tech is Tech 52 who completes the saga in the end 5+2=7
Take a look at the callus machine entity in the movie and tell me that is not the pyramid and all seeing eye.
Hollywood believes in the significance of numbers too…

Thanks.I am a Christian and Catholic.And would like to say that all true Christian Catholics who love and serve Jesus will have nothing to do with any false one world religion.We put Jesus above the pope who is 100 percent human.The Catholic church for 2000 years has taught that Jesus is the ONLY way to salvation and other religions are the sects of the devil and need conversion.It was the Catholic church that from the first century gave us the bible,the apostles creed and evangelized whole nations long before Luther was around in 1517 and has fed and clothed and housed tens of millions,built universities and hospitals around the world and were behind great movements in science art and architecture in the middle ages and laid the foundations for freedom and morality in western civilization and stand for the unborn around the world.This is the catholic church i belong too.not the false religion of some watered down fake catholic church uniting to other religions.True catholics will NOT be part of this false religion as we hold what 2000 years the church and Bible teach us that Jesus is the only way to heaven.However i agree many dead nominal catholics will be only too happy to join this false religion.But God will sperate the weat and tares among all caths and prots