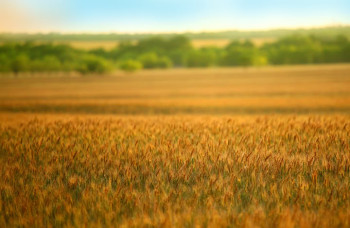 One night in mid-2007 I experienced an unforgettable dream.  I have shared this only in certain meetings or conferences since then. Scroll down to see a 5-minute video presentation of my dream.

My dream is as follows:

I was on a train that was almost modern. It appeared to be a cattle car train but to my surprise, it was not cattle, but people  were chained up inside. They were mostly quiet, and all enslaved. Horror and shock filled their faces. It reminded me of old scenes from Schindler’s List and the holocaust, but this was not the past. It was the near future.

I was able to move on the train from one car to another. We were going through a mountainside, through tunnels, and finally stopped in an agricultural area. The fields were golden with wheat! Suddenly the train lurched to a stop. I was able to get off, leaving the enslaved people on board.

I saw amber colored wheat fields as far as the eye could see! I scanned the horizon for a short time, seeking to get away from the terrible suffering on the trains.

I spotted someone in the distance. About 250 yards away, someone was walking towards me. It was one person. As they got closer, I began to see it was an older gentlemen.

I did not know what to expect.  He came right up to me with joy and embraced me! He looked into my eyes and introduced himself “I am John the Apostle,” he said.

Wave after wave of God’s love, light and glory washed over me. I felt heaven coming from him and all around him. The purest love and warmth emanated from him. I felt washed by love and embraced by a true brother. He was not under the fear or bondage experienced by the people on the train.

His embrace pushed all the terrible fear off me, as if the fear had been rebuked. Wave after wave of God’s light burst into my heart. I momentarily glanced down to see an area of darkness in my heart! Everything was getting exposed and revealed in me and around me. Without the light of the Holy Spirit, we do not even know what makes us stumble.  I wanted to talk more with John, but I suddenly awoke.

I knew I had just witnessed the future fulfillment of John’s prophecies from the Book of Revelation. These were the very first thoughts that came to me as I jumped out of my bed.

God’s presence was with me as I awoke. There was a literal hunger for God that rested on me for weeks and months to come, and it still is there today. I tried to get back to bed to meet and talk with the Apostle John! God’s Presence filled my room. Heavenly treasures are so wonderful.

The interesting thing was that John’s writings came alive to me after that. I began to understand the Christ centered passion he revealed in his writings. Something of heavenly understanding was imparted to me from my dream. I can not articulate it, but his Gospel and epistles became much clearer, in a hermeneutic sense.

Divine revelation demands a choice. The consequences are simultaneously  “great and terrible” (Joel 2:31).  It is great for the redeemed but terrible to those who reject God’s free offer.  No one will escape making the decision. We are either for or against God’s enfolding purposes. John said there was a sweetness and a bitterness to the message he ate. Redemption is sweet, but the consequences of rejecting God’s free gift are bitter (Revelation 22:17).

Sheep and goat nations are now forging their permanent identity. God wants all men to be reconciled to Him now in this final hour.

“Multitudes, multitudes are now in the valley of decision.” (Joel 3:14)

“Heavenly Father, I ask that You empower us with the grace, bravery and insights required for the days ahead in Jesus’ mighty name, amen.”

Special thanks to Z3 news for encouraging me to post this dream. I dedicate this post to brave E.N. Kure of North Nigeria (Throneroom Trust/Global Spheres) – whom I first discussed this revelation with.  God add more “fire”  around  your burning messengers.  You are an utter inspiration of fiery faith.

Shalom dear family of God! Read the Book of Revelation, Psalms, Daniel and Acts- relevant for our times!

The cattle cars represent the church. As long as the church stays in their buildings they are on a course of bondage. One by one they’ll be awakened to their purpose, the train will stop in the wheat fields, and the harvest will be harvested. It’s time the church became the ecclesia, the called out ones. Wake up church, and do what you were called to do! Heal the sick, cast out demons, and preach the gospel.

Brother JM,
I’m glad you found us too! Your words “The world experiences a lack of God….when you are not there!” brother, just thank you for living out of that. You encourage me to do the same. I see a day coming when we will need to walk in the revelation of Jesus to survive- but how will we walk in it then, if we don’t walk in it now.

I posted a while back that deciding to stay after all God’s warnings was no better that weakly walking into the trains in Germany….. Again, most stated I was just “running away”………. I disagreed then and disagree now……… Those cattle trains described with shackles are real and in waiting. FEMA camps are real and waiting. Even guillotines are in waiting……… Half the US will be under water……….Tell me again why everyone’s getting these visions ?

Brother, you have touched on something that is compelling me to speak in confirmation. . In 2008 I was on a train going out of Texas. I had been visiting a couple of friends there. When I was to leave I got word from the station master that the train had been derailed above the point of my departure. They sent buses out. I was the only pick up where I was, Other buses left from other locations above the tracks where the derailment was. From there I was taken via the bus, already full of other riders, to San Antonio. There we had to wait for the next train. It arrived around 3 am. Everyone that had traveled there on the other buses were there waiting and when it came it was a pile on scene. I got on. There was no room upstairs so many were standing, packed like sardines in a can. The latrines were pouring over onto the floor, and there we stood with our meager belongings held in the duffles and suitcases. We were shoulder to shoulder. People were getting ruffled and angry, others afraid that they wouldn’t get home. I had something like a vision, but not exactly. I actually felt at one moment that I was experiencing being in a cattle car. It was so profound and it really shook me. About that time many people got off because another train car was being added. I stayed down in the luggage area. It wasn’t a dream, it was a reality with a delivery of the understanding of things to come,in my understanding.