You are here: Home » Prophecies » Islamic Jihad » Christians and Jews Flee for Their Lives from Muslim Jihadists
Share this post: 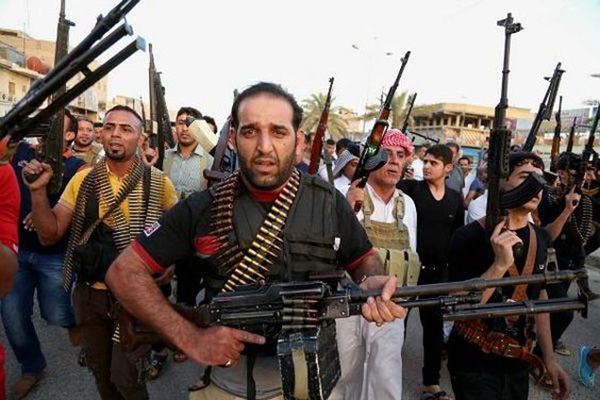 My friend Danit was with me at an Assembly of God on Gold Street where I once worked as a music minister. We were in the sanctuary when jihadists stormed in to attack. They were dressed in ISIS black, ski masks covering their faces, and were in hot pursuit of my friend, Danit, from Jerusalem, Israel.

I knew that if they were after her, they’d come after me too, but first they pursued her with a vengeance. I instructed my friend to run for her life. Run and hide.

Suddenly we were like the refugees in the Middle East, now fleeing for our lives. I told her to run past the neighboring houses and cut through back yards until she found the woods, then hide there and wait for me. I watched as she ran; saw her sneakers treading dirt and leaves. I knew for certain I was next. Then I saw a vision of fire, a blazing inferno surrounding us.

Big Satan, Little Satan, and a Vision of Fire

The interpretation to this dream is easy – we are the Saturday people and the Sunday people. My friend Danit represents the Israeli Jew while I symbolize the American Christian. We epitomize little Satan and big Satan, both of whom the jihadists seek to destroy in their unholy war.

The vision of fire at the end of the dream, though it will most likely also play out literally, reminded me of these words from 1 Peter:

“Beloved, do not think it strange concerning the fiery trial which is to try you, as though some strange thing happened to you; but rejoice to the extent that you partake of Christ’s sufferings, that when His glory is revealed, you may also be glad with exceeding joy.” (1 Peter 4:12 -13)

These words from the disciple who, counting himself unworthy to die in the same manner as our Lord, was crucified upside down.

That particular AG church in my dream, which I haven’t attended in years, and from which the parishioners have since moved and relocated, the old building now inhabited by Hispanic worshipers, represents the public assembling of ourselves together. Anyone is welcome to walk through the door – anyone. But the day is coming when churches here in our nation will be open targets for jihadists. The season is fast approaching when the Bride and the Body of Christ, unless we desire martyrdom, may need to go underground and hide.

A Traitor in the White House

Danit has been in America for nearly 20 years now. I’ve often asked why she doesn’t return to her homeland in Jerusalem where her family of origin still lives – including her grandmother, a holocaust survivor. She says that because Israel is plagued with terrorist attacks, she feels she and her children are safer in the U.S.

But I remind her that we aren’t exactly safe here either, especially now that we have a traitor in the White House who wants to bring in thousands of Muslims, many whom are terrorists camouflaged as Syrian refugees.

Never mind that there are better alternatives to the crisis than bringing the refugees to America. Franklin Graham, head of Samaritan’s Purse and one with notable expertise in humanitarian aid, is urging President Obama to establish safe zones in Syria instead of transporting them here.

But remember, Obama lends his ear to Muslim counsel only, not Christian. Nor does he have room in the inn for Christian refugees. Why is this? Could it be because he intends a Muslim takeover of the U.S.A.?

Just as ISIS has launched a bloody campaign to purge the Middle East of Christians, marking homes with the red letter “N” for “Nazarene”, confiscating property, capturing sex slaves, forcing conversion or torture, and crucifying and beheading their victims… Just as one Christian is slaughtered every five minutes in Iraq, and Islamic State Militants are using churches as torture chambers where they force Christians to either convert to Islam or die, so will it be in the western nations, including America, as our government has betrayed us.

Besides not protecting us from “all enemies both foreign and domestic,” what other ways have our government betrayed us?