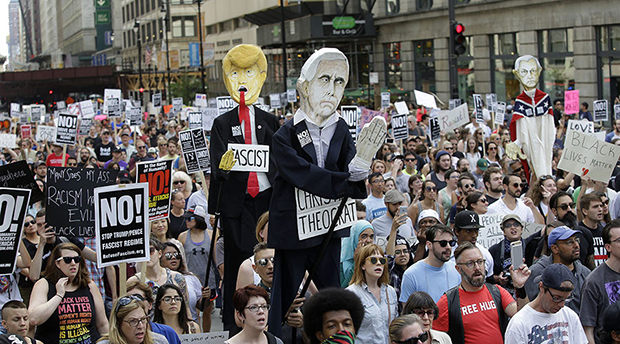 Protestors in Charlottesville VA and across the country are showing their ignorance by attacking monuments honoring Confederate soldiers. Author Dinesh D’Souza spoke out about the recent protests, explaining why the attacks are misguided.

“To me there’s a bigger story here – the left’s attempt to blame slavery entirely on the American South,” the author contended. “This is a big lie, because number one, most Southerners did not own slaves, nor did most Confederate soldiers. Number two, the Northern Democrats in the preceding 40 years before the Civil War aggressively protected slavery. And they worked in cahoots with Southern Democrats.

The fight over slavery wasn’t between North and South. It was between a pro-slavery Democratic Party and the anti-slavery Republicans. This entire controversy, and the larger effort to remove Confederate memorials all over the South, is an attempt to cunningly conceal the Democrats’ historic role in protecting slavery as an institution.” (Source: wnd.com)

The protestors are giving a free pass to the Democratic party, which has historically been the driving force behind slavery and white supremacy groups. If the protestors truly cared about slavery, they should stop supporting the Democratic party and start tearing down all monuments honoring Democrats regardless of what state they’re from. Instead, they overwhelmingly align themselves with the Democrats, while attacking Republicans like Trump and Pence, calling them racists and fascists, as shown in the photo above.

Amazingly, the Democrats have managed to hide their pro-slavery, white supremacist roots from their political base and done it so successfully, many Democrats now believe white supremacist groups are part of the far right, when history shows they’ve always belonged to the far left, Democratic party. White supremacists promote this deception by portraying themselves as part of the right, even showing up in Charlottesville with signs saying, “Unite the Right.”