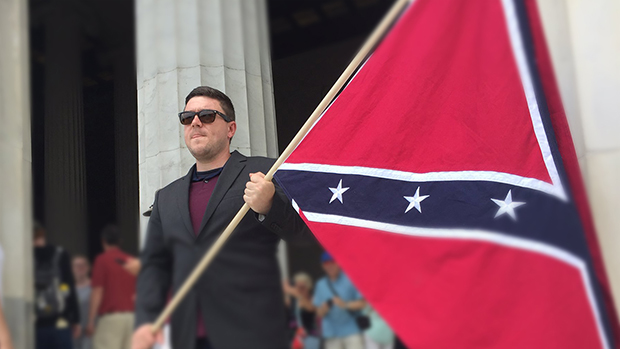 The forces of hell are waging war against the United States of America with the man of sin standing at the helm, taking action against the strongest fortress on earth, fulfilling his destiny as recorded in Daniel 11:39.

Already fallen and now working in full cooperation with hell are the mainstream news media, most of academia, many of our Congressional representatives, governors, mayors, judges, business leaders, all blindly following their orders in a demonically coordinated effort to bring about a revolution, to destroy the foundations of our nation, to replace our Constitutional republic with communist tyranny.

Their strategy is to divide and conquer and they’ll do it any way they can, rich against poor, young against old, educated against uneducated, and their favorite, race against race.

It’s time to fight back by exposing their schemes before another one of our brothers or sisters is taken captive, but before we can fight, we must know what this fight is about. We must not allow the enemy to define this battle because if we do, we will already be divided and ultimately defeated. We must recognize this fight is not against racism. We are fighting Satanism.

The violent protests in Charlottesville VA were staged. The man who organized the fraudulent group, Unite the Right, intentionally chose that name to portray conservative Christians as racists. Ultimately, this war is a Satanic assault upon the righteous, seeking to dupe the American public into turning against Christians. Satan wants us silenced, locked up and put away.

Jason Kessler publicly describes himself as a professional provocateur, which is a fancy way of saying he’s a hired thug, paid to create street violence. In a statement posted on his blog on December 16 2015, which has now been taken down, he wrote, “I can’t think of any occupation that I admire more than the professional provocateur who has the courage and self determination to court controversy despite all slings and arrows of the world.” (Source: Trunews, August 15 2017 program)

Jason Kessler is about as far from the right wing as anyone can possibly get. He supported Barack Obama and actively participated in the Occupy Wall Street protests.

He’s not a white supremacist either. It was not until after Donald Trump won the 2016 presidential election that he hatched his plan, or more likely was given his marching orders, to organize his white supremacy group. Prior to that, he publicly made comments no white supremacist would ever make, voicing his approval of white men marrying African American women by stating, “taking voluptuous ebony queens as our blushing brides.” White supremacists have been known to murder people for their participation in interracial marriage.

The real Jason Kessler is exposed in a YouTube video he published in 2014, sharing a poem he called “White Devils,” which he claimed to receive in a dream. The following is a transcript from that video.

“I’m kind of a cynical type. I don’t believe in the government. I
believe in myself.  I definitely do not believe in the power of love,
but I think that I was born fine the way I was born the first time. I don’t think I need to be born again. I think I don’t need to be saved. So okay, this one doesn’t really have any meaning. I just, it came to me when I was in bed and I wrote it down. It’s one of those things to kind of seemed to gel in a twisted way, so this is called, “White Devils. “

Let us hide in the jungles of Africa, grow indigent, become possessed with goats from the fields, train our buzzards to unleash upon the carcasses of the third world. Let our hair grow preposterously long and neglect to cut the fingernails for a quarter century until they grow riddle, blackened, spiraled, scaring the silly little things that believe in princes or monsters. White devils, white devils they will name us, sucking lithium and orange juice through vent straws, yanking out the worms to eat, throwing the apples away, attracting wild boars, carrying prose, taking voluptuous ebony queens as our blushing brides.

With revolution comes civil war, beatings, hangings, stagnant lands reverting to barbarism in absence of order, scapegoated witches, disease, disorder, death, rousted from our hermetic prose, three past the midnight hour, hung by our ankles, pyrex to burn the bodies, In effigy of eternal lover. Shush, try not to scream as the flames lick your flesh. Awe, who am I kidding. Scream away white devils, madmen all.” (Source: Trunews, August 15 2017 program)

Possessed with goats from the fields? Yanking out worms to eat while throwing away the apples? And where does it all lead? Revolution, civil war, beatings, hangings, disease, disorder, death. He claims he received it in a dream. I believe it, a dream from Satan.

Jason is a demon possessed Satanist. His writings and activities expose him as an anarchist, a radical left wing revolutionary waging war against our republic. He is being used by Satan to bring deep darkness upon our nation. He is throwing out bait, obscene lies, seeking those who are foolish enough, undiscerning enough to believe him and the mainstream news media who promotes his lies. Those who do are sure to take sides and when they do, the damage is done.

We must be on guard against Satan’s schemes to divide us, recognizing our fight is not against flesh and blood, but against spiritual wickedness in the unseen realm. (Ephesians 6:12) We must resist Satan’s lies and expose them for all to see. Then we can receive the greater anointing of God’s spirit, which comes upon us when we are standing together in unity.

Thanks to the Trunews staff for the excellent research uncovering these facts.

Thank you James for posting this as I had read some background information on the organizer but not seen TruNews’ article. I love ❤️ that Z3 News is standing on the TRUTH at a time when we are surrounded by lies & deception. It always gives me hope that there are many, many others that are choosing TRUTH, regardless of the costs. ❤️ Many blessings.

We can all do our part exposing these thugs.

Thanks for sharing this Ken. Our country is under attack from enemies within. The mainstream news media is in on it too, refusing to investigate these facts are share them. As a result, the perpetrators are succeeding in getting the results they wanted, which is sad to see. We can all fight back by exposing the truth about what they’re doing, just like you have done by sharing this. Hopefully, our efforts will also expose the bias of the mainstream news organization.

Ken it’s like a pro-wrestling match. People watch and believe it, but it’s not what it seems. And I used to be a pro-wrestler!

That’s what it’s all about. We are in a war and it’s getting late. Time to fight back.

We also need to pray against these “staged rallies” as they are being used as tools of Satan, satanic traps, to get possibly innocent curious people to these rallies with the end result being death and possible eternal separation from God. Hey, this Kessler guy openly stated he doesnt need to be born again. Do you think he cares that a woman possibly lost her life and soul at one of his rallies? Does he care that the law enforcement guys died in that helicopter crash?What about their souls? Horrific judgment awaits this man!

Perfect timing James. The REAL FIGHT is against Satan and his minions.

After reading the book of Esther regarding Haman’s plan to destroy the Jews, and how that all turned out, my prayer is for those who are plotting evil against our country and our president will hang themselves on the gallows they are building

I will come along side you in this prayer!!!!

Wow, that dream was strait from the deepest pits of hell. The Lord rebuke you Satan!

I remember an interview Lisa Havens had with Larry Nichols 2 months ago –he said the plan deep state was to become us and stage attacks to make right odious and cause civil war. Now its coming true.

Yes and amein.
Satan has used this same bag of tricks over and over on us.
Thank you James for letting the light of the Spirit of Jesus shine and we know that light penetrates through the darkness and exposes all the lies of,the wicked one.
This is the beginning of the prophetic word spoken that the lies would be exposed and bring forth redemption and honor of the Name of God and His people.

The more that we learn, the worse it gets. There is so much deception out there. I am so thankful that God has given us the answer to how all of this turns out but it is sure hard to believe that our great nation has gone so wrong so fast.