You are here: Home » Prophecies » Believers Transported to Meet the Lord in the Air 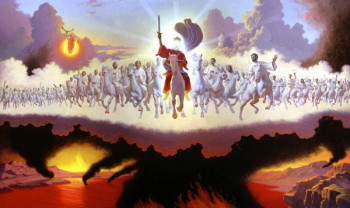 I had a dream where I was on the ground, then suddenly I heard the most amazing music. It is something that I have never heard on earth and is a bit hard to describe. Imagine every voice in Heaven and Earth as well as every single musical instrument in Heaven and the Earth playing/singing the same note and building it to a crescendo. It was so loud and overwhelming, yet so beautiful at the same time.

As the music played, I was suddenly transported up into the air. It was a blue sky with a few clouds around. As I floated in the sky, I could see Jesus galloping towards me on a white horse. His robe was blowing in the wind and behind Him were thousands and thousands of saints on white horses also. They were coming toward me in a V-formation with the Lord in the front. As His horse galloped, rolling clouds formed under the horses feet as if the clouds were rolling out before Him and making a pathway of solid ground for the horses to ride on.

As fast as the horses went, the cloud was right in front rolling out. It was the most amazing sight I have ever seen and I know according to the scriptures that when He comes back after the tribulation, He will be bringing the saints with Him to rule and reign here on the earth.

It was as if He was showing me His seriousness and His might as He came back to the Earth to make things right. It was awesome!

© 2015 – 2016, Z3 News. The first 200 words of Z3 News articles may be shared online in exchange for a clickable link to our site. Please include the author name and do not make any changes to text or titles. No image files from our site may be shared because we don’t own them. For permission to use our content in other formats, please contact us.

The rapture of the church is in plain sight throughout the scriptures. First of all, the tribulation is called the “time of Jacob’s trouble” because God is bring trouble to Israel trying to wake them out of their slumber. We, the church, must be removed for God to do His work. God is bringing wrath to an unbelieving world and the church is not part of that. Yes, the church was promised tribulation, but there is a difference between “tribulation” and “the tribulation”. God promised that we will all have troubles in this life, but he also promised us that we were not destined for His wrath. The tribulation (or times of Jacob’s trouble) is all about God’s wrath on an unbelieving murderous people. The following verses shows a pre-trib rapture before God’s wrath will come upon the earth. Zephaniah 2:2-3 – 2 Before the decree takes effect— The day passes like the chaff— Before the burning anger of the LORD comes upon you, Before the day of the LORD’S anger comes upon you. 3 Seek the LORD, All you humble of the earth Who have carried out His ordinances; Seek righteousness, seek humility. Perhaps you will be hidden In the day of the LORD’S anger. Psalm 27:5-7 – 5 For in the day of trouble He will conceal me in His tabernacle; In the secret place of His tent He will hide me; He will lift me up on a rock. 6 And now my head will be lifted up above my enemies around me, And I will offer in His tent sacrifices with shouts of joy; I will sing, yes, I will sing praises to the LORD. 7 Hear, O LORD, when I cry with my voice, And be gracious to me and answer me. Isaiah 26:19-21 -19… Read more »

I have pointed out in all of my posts that God’s people will be delivered from the wrath to come because that promise is clearly stated in scriptures. So we are in total agreement on that point. However, the Lord has never promised to deliver us from persecution or tribulation. In fact, he has promised we would have both. There is no scripture to back up the claim that the tribulation we are promised to endure is any different from the tribulation that occurs during the first 42 months of the final seven year period. In both cases the exact same Greek word is used, which is thlipsis, which means pressure. You have to make up your own doctrines to claim there are two different kinds of tribulation because in the Bible they are identical. So the only question is when does the wrath of God begin to be poured out. That happens during the great tribulation, which begins after the man of lawlessness is revealed and after the great falling away from the faith (2 Thessalonians 2:1-4). It begins in Matthew 24:21-22. “For then there will be a great tribulation, such as has not occurred since the beginning of the world until now, nor ever will. Unless those days had been cut short, no life would have been saved; but for the sake of the elect those days will be cut short”. The great falling away from the faith is the result of the tribulation and persecution. How could we fall away from the faith if we are already in heaven? We are also in agreement about the fact that not all believers will be taken in the rapture, like the five virgins who had no oil in their lamps. They were left behind. Regarding the coming of the… Read more »

What do you think about the 7 Rapture theory!
3 have already taken place:
1) Enoch
2) Elijah
3) Jesus
……………………
4) Present obedient or repentant holy living church (church is taken, times of gentiles completed. Jews take over and finish the work in the tribulation.
5) Mid Trib Saints
6) 144000 Jewish Evangelists (yes there will be martyrs but are they killed after 144 are taken)
7) The 2 Witness
Could it be that every one is right with their rapture beliefs as all these raptures take place but at different times!
Why would God rise up a 144000 Jewish Evangelists(sealed) if the 5 fold ministry (church) was still on the earth!
We all know that 7 is Gods number.
Presently we are in a 7×7 shmitah year
Daniels 70th Prophetic weeks starts with the tribulation
7 days (= 7 prophetic years) for a Jewish wedding Jesus picks us up for the banquet. Same length as the Tribulation.
7 Billion People on the earth
Christ rules in the 7th M
There are many other 7s but I’m not into long winded writing.
With this in mind read Revelation you may just see different groups of people arriving in heaven at different times.
I believe in keeping a open heart about these things. I am not convinced as the rapture is still a bit of a mystery, just be prepared however it goes down.

There are no scriptures to support any rapture in point 4 or that there will be no martyrs until after the 144,000 are taken in point 6. By some estimates there have already been close to one million martyrs in Iraq alone during the past decade or so. So we all get off the hook while those believers have already been laying down their lives? Sounds like another classic Americanized gospel to me, which is to give everyone what their itching ears want to hear.