You are here: Home » Prophecies » “The battle has shifted, My children.” 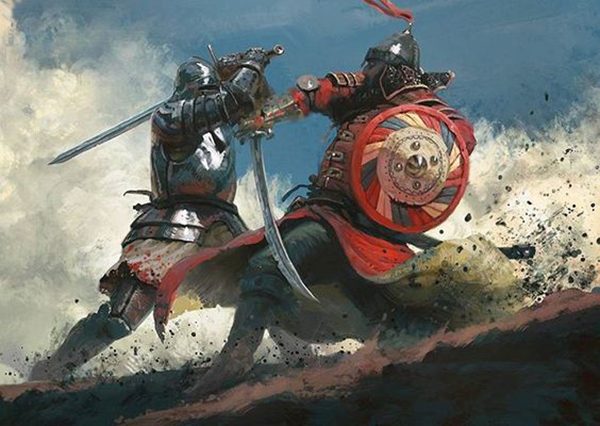 The battle has shifted, My children. You are at war and the war has intensified. The battle for your souls is very strong and you must choose which side you are on. When you choose sin, you choose Satan’s side and you will be given over to that side.

Do not say you fight on My side and then choose to sin each day, for Satan will be given power over you if you do this. I have told you the lines were being drawn. It is you who draws the line.

Choose wisely. Life or death is in each choice.

23 For the wages of sin is death; but the gift of God is eternal life through Jesus Christ our Lord. (1 Corinthians 10:13)

13 There hath no temptation taken you but such as is common to man: but God is faithful, who will not suffer you to be tempted above that ye are able; but will with the temptation also make a way to escape, that ye may be able to bear it.
James 4:7
7 Submit yourselves therefore to God. Resist the devil, and he will flee from you. (Romans 6:23)

Definitely the Word for this day—choose whom you will serve. We’re at the end of time. No more time to waver between two choices. Now is the time. I choose Jesus. Help me, LORD!

Wow, I did something yesterday I knew was wrong and I swear the Holy Spirit told me this exact thing…along with stop making sin option

GBU Glenda. Reminds me of a time I sat with two distinct people and others discussing a revelation of Yeshua. One person spoke very well of it and was enthused, but what I noticed was her face glowed golden white and she was utterly beautiful within and without. The first lady who spoke however was chiding, complaining and negating the whole thing but it was a demon speaking, which I saw and she herself was unseen swallowed up. Another sat on the fence and was man pleasing in response appearing to be for Him, as it was instructions for how to proceed. This one looked neither bright nor dark but old. I happened to be thinking upon that incident this very morning soon after waking, then I read this!

Thank you Lord for setting me free from the law of sin and death. Thank you Glynda for this wonderful word.

Latest word through GLYNDA LOMAX: Updates from http://wingsofprophecy.blogspot.com/ Just Praise Him AMERICA WILL FALL By Glynda Lomax on Apr 19, 2017 11:54 am A great storm comes to the land of America, a storm that will bring much chaos, and much indecision in high places. America is on the brink of war, but its general is not ready. Fires will burn across America and much unrest shall abound. A people divided cannot stand, and the enemies of America will seize that moment to invade. America will fall to the hands of her enemies because she has turned her back on Me, and no longer has My protection. Prepare yourselves, My people, for war is coming to America and other countries as well. The end is upon you for all of My Word shall be fulfilled in this generation. You shall see the rise of the Evil One, but you will be powerless to stop what must take place that I may bring you home to Me, and cleanse this land. Be strong, be courageous – stand strong on your faith in Me and do not turn from it, for this is the greatest danger. Fear not those who can kill the body, fear only the one who can kill both body and soul. Do not be afraid to profess My Name, for I am with you when you do this, and I will be very merciful to you. Matthew 10:17-35 • 17 But beware of men: for they will deliver you up to the councils, and they will scourge you in their synagogues; • 18 And ye shall be brought before governors and kings for my sake, for a testimony against them and the Gentiles. • 19 But when they deliver you up, take no thought how or what ye… Read more »