You are here: Home » Prophecies » America Under Attack » Prophetic dream: US and allied planes dropping bombs on American city. 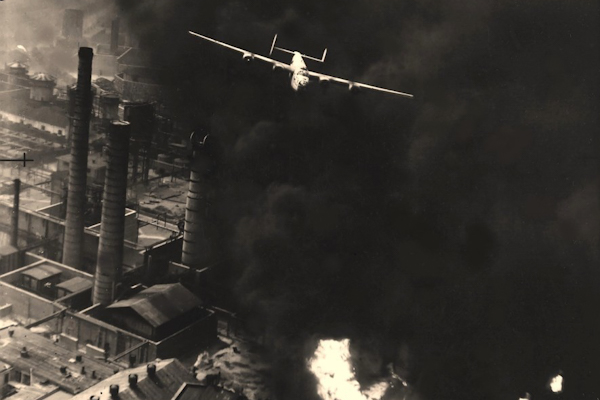 I had a dream about two weeks ago, in which I was in a large American city. The sky was filled with black clouds, shooting forth large, violent streaks of lightning.

Then WWII era US and allied planes appeared and began dropping bombs on the city. The scene changed and I was preparing a meal for my “master” or “owner”, for our people were now captive and I was a slave.

Yes, we should expect that when America falls, many of our people will be taken captive and enslaved, just as Israel was so many times when they refused to repent and obey the Lord. Those taken as slaves will be those who are most fit/healthy and of age to be able to withstand hard labor. As has been true over the ages, those who are not able to meet the needs of their owners will be killed as they will be seen as little more than “worthless” mouths to feed (commonly referred to as “useless eaters”).

Deborah Hartvikson initially launched the website ItDoesMatter.org in an attempt to wake people up to the destruction to our health, caused by commonly used food, beverages, and water. In 2015, God told her to shift the focus of the message to warning the Body of Christ to prepare for the coming times. It is her desire that what she has penned in response to the leading of the Holy Spirit will have a significant impact in the lives of others.

I believe the hate for America around the world is so great, by other nations, they will give The American people harsher labor, than N. Korea harshest labor, purely out of vindictive spite.

Interesting these were WWII era planes… These planes would still fly after an EMP, and would not be affected by EMP-weapons used to disable (air & sea) craft.

Deuteronomy 28:36 NKJV – “The Lord will bring you and the king whom you set over you to a nation which neither you nor your fathers have known, and there you shall serve other gods—wood and stone.”

Jeremiah 5:19 NKJV – “And it will be when you say, ‘Why does the Lord our God do all these things to us?’ then you shall answer them, ‘Just as you have forsaken Me and served foreign gods in your land, so you shall serve aliens in a land that is not yours.”

Perhaps that is why some virgins were taken with the bridegroom? Because they were ready spiritually and physically and did not have to sorrowfully ‘buy’ more oil. The prepared go on ahead and the unprepared must wait a bit longer and miss some of the festivities, but maybe make the reception…

I have had these same kind of dreams. not good

Nice Photo of B24 Airplane? Just as God knew Israel would not turn, also I suspect, that America may not turn, and God is warning us what awaits some of our citizens (That live). I hope not myself, although I don’t live in a city. Americans have had it easy for a long time, and are used to many modern convinces. I wouldn’t be surprised that some would rather take enslavement, than flee, if indeed there is any direction to flee.

Babylon the Great has Fallen, has Fallen.
Lord has inspired me to prepare like never before.
I’m building a “shed” that i plan on being self suffecient with solar and wind, i have 13 acres with a well, my shed will be our home when that time comes, living in a rural area the city issues will not bother me, but regardless I am preparing. Many in Arkansas are too, many have seen Eureka springs area as a safe place but I’m not sure on that, it is the gay capital of Arkansas.
If you can get away from Cities, move to the country someplace and prepare as the Lord leads you…

This is why you need a bug-out bag and also plans in advance (in several different directions).

This is more of a side comment on survival….Being a backpacker, it wouldn’t be that hard to ‘walk out’ of the area, and a lot of backpacking equipment is similar to a bug out bag or go bag. Just make sure you are used to the shoes or boots you are planning on walking out with, blisters are no fun…

America will fall for sure, but if you’re using Israel as God’s pattern, did He not leave a remnant in the land? But I also believe that the example of Sodom will also be in play………which for those few of us that believe in a Pre-Trib Rapture, we believe that before Russia bombs out America and she’s brought into UN slavery and or Russian Chinese occupation, that God will have evacuated His elect Remnant, not based upon their wish to escape, but based upon God’s word and His mercy to His Bride.

Sadhu Sundar Savaraj made a very good point, and he is one who used to believe in a pre-trib rapture until the Lord corrected him. Sadhu’s point was, or perhaps it was the Lord’s, if Christians were able to escape the tribulation there would be no purpose to the ‘mark of the beast’ and Christians having to be tested as to whether they would choose Satan or Jesus. Christians are being beheaded for their faith in the Middle East right now and are not escaping through a rapture. The Book of Revelation clearly states that the saints will be beheaded. The trouble will escape theology is that when it does not happen and people are faced with the disappointment they will more than likely be upset with God and decide to take the mark of the beast because they were not prepared to die for their faith in Jesus. Many today are also deceived by thinking that God wants them to be armed to the teeth so they can ‘shoot their way’ out of the Tribulation.

With all the SDA’s that visit this site, it’s fruitless to argue, even though James is not an SDA yet believes in a Post catching away-I’m not sure how, but Sadhu’s word does not trump God’s word. The Tribulation Saints are those Jews and Gentiles who saw the church leave and are steadfast to believe what God has said. We are not appointed unto wrath.