You are here: Home » Prophecies » Explanation of How Covid-19 Vaccine Will Genetically Modify Human DNA
Share this post: 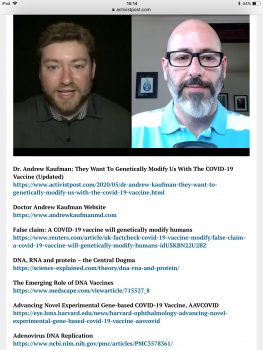 In this video, Dr. Kaufman discusses:
– how covid-19 will push us into global governance, reduced population, tighter control over the population with a new financial & monetary currency system and a world with NO freedoms
– all the plans being enacted now were spelled out in different documents from the Rockefeller Foundation, the UN Agenda 21 later changed to UN 2030 – everything correlates to current policies
– the involvement of DARPA, Department of Defense & Bill Gates are funding the vaccine with rolled back requirements & zero liability
– the unprecedented, coordinated, global agenda being driven by a group of individuals
– the plan to inject genes into our bodies & using electroporation procedure with two extra needles with an electric current with the vaccine to make holes in our cells to allow the DNA to go into our own cells
– the goal is to make us into genetically modified organisms

In this video, Dr. Kaufman shares:
– how the Covid-19 vaccine will genetically modify human DNA
– his response to Reuters’ “fact-checking” on his last interview with Spiro Skouras
– information about microbiology
– how the covid-19 vaccine is different than traditional vaccines
– details on the CRISPR-CAS9: Gene Drive Technology

This is a truthful piece of video that I believe Dr. Kaufman’s most extensive study about vaccine is involved in. Yes, I believe Bill Gates’s purpose of shooting the vaccine right into our veins is to modify us genetically. So satanically motivated but I believe that is what their practice of vaccine is all about. Thanks for posting this video and spreading the truth.

I just watched a very disturbing 2-part YouTube video from the ministry Israeli News Live with Steven and Jana Ben-nun speaking about, and sharing expert information, on how the Covid vaccine creators are utilizing live babies (3-5 months) and removing their hearts using no anesthesia for the purpose of taking the material and inserting it into the shot. We have reached such an absolute sickening place in our world. God help us!

Youtube Titles at Israeli News Live: Shocking Information Shakes You to the Core, and Followup on a Shocking Video.

Yes. I posted about this vile practice in this article here on Z3 News – https://z3news.com/w/pure-evil-babies-born-alive-beating-hearts-removed-culture-viruses-vaccines/