You are here: Home » Prophecies » Visions of Endtimes & Obama the Antichrist with Susan Elizabeth Rathburn
Share this post: 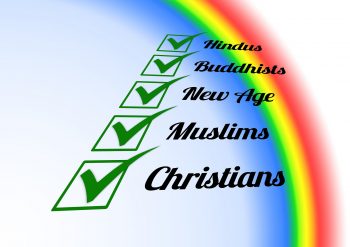 This interview was given on December, 15 2019 on Tribulation Now Radio. Susan Elizabeth Rathburn gives a brief testimony of her walk with the Lord and discusses what the Lord has revealed to her through words, dreams, and visions concerning the identity of Barack Obama and his role in the endtimes.

She shares a open vision she had in March 2015 in which she saw a separating of true believers from the false church. She saw Obama leading this movement to bring people together in a false unity, compromise, and a false idea of what love is. She saw them declare war on the true church and those who were walking in extreme darkness. The church was lumped together with extremist and anything extreme was to be removed.

Her words, dreams, and visions offer confirmation to many previous revelations documented on Z3 News, including my most recent post of a dream I had in which Obama was calling for religious unity. I pray that you seek God concerning all things. The Lord’s presence is tangible in her testimony.

Dear Brothers and Sisters, this is not for this post, but I need your prayer and revelation.
For 4 months I have been pain in my body the doctors cannot help, I do not know in which organs but maybe the urethal area or the area next to it. It is burning like the chili and feel pain. I had also colitis in the sigma area but this burning pain is another thing. I have panic feelings too. I feel that my body fight for the life. Many times I so weak that I think I will faint. I don’t know what is it, what to do just pray cry, and fight. I cannot bear anymore!
(I have klimax also maybe the hormons do it but I dont know)

Lynne NZ
Reply to  Any

Dear Any, as I read your request I thought of cayenne pepper. No idea why…haven’t thought about it for a while except to put in chook food the other day when it was cold!
Here is a link to testimonials by people qho have used cayenne http://cayennepepper.info/incredible-stories-about-cayenne.html
Also remember we do what we can in the natural but we also must fight in the spiritual! Will pray for you.

Lydia ..makes sense. As we know the blending together of many religions.. There is a big Multi- Faith Movement that has been going for a while. I was first alerted to it when visiting a relative in hospital way back maybe 2009 I went to the public hospital locally to visit someone & as I was walking down the corridor to the ward I noticed a Multi Faith Chapel that was set up to accommodate people of all faiths. It was on my right as I walked down the hospital corridor. I have never walked inside one of them though; basically on principle: just know that is the trend.

Also another one locally to the South- west of where we live & same thing multi faith chapel, except this one had all the different symbols on the windows to the chapel- representing- Hindu, Muslim. Sikh ,Buddhist, Jewish & Christian.. then I saw a wall plaque called the Golden Rule: this was back in Jan 2015 ;but cannot remember what the golden rule said.

Our Local Council has a Multi faith network : has been going a while.. consisting of a Christian Pastor, & again men & women from other faiths joining together, Hindu, Catholic, Muslim etc. it is a blending in and acceptance of people of supposedly different faiths.. more or less agreeing to live in Harmony & acceptance of people of all faiths – so can certainly see where this theme is leading.

I have actually seen a video of Obama worshipping & giving almost a sermon from the pulpit of a Methodist Church in USA – cannot recall the name of the church he was singing Amazing grace in the video.. & that led into what he wanted to say.

so he as an appeal to people of his own race. etc.. interesting comments below the video.

back in 2006 I was aware thru my youngest sons primary school that they had a Harmony day for the students..

I had never heard of the term & felt @ the time it sounded a bit new age.. well it turns out each child was given an orange ribbon to wear in honour of their harmony day so I found out more with the Holy Spirit leading & realized it was the harmony & blending ,acceptance of people of other faiths. so the following year my son & I spoke to the principle and my son chose not to wear the ribbon .on his terms. The next year the Teacher who organised the event had moved on & it was not celebrated after that to my knowledge.

Thanks for sharing Anne. These things stand out to me. There is a path to peace being laid out but it isn’t true peace. We know that only comes through Jesus. It seems everywhere I look I’m seeing evidence of this false unity, peace, love, and compromise. It is definitely a spiritual battle for us to stand in truth when so much of the world and church are buying into the lie. God bless.

Thanks Beth. susan references John 17 as you know,
Phil

Yes it’s me, my grandma asked my parents to call me Beth to honor her mother I didn’t know my first name was Susan until kindergarten role call

Oh Beth, that is such a sweet story. God bless you!

Thanks Beth. I want God, not good. I don’t want the false muck and mire. I loved this message. It brought tears to my eyes. It is you right?

I fleeced God for a month trying to get out of going on that show when Johnny emailed me. I begged Jesus to raise someone else up and I would pray for them instead like I like to do interceed.

I greatly love and fear THE FATHER and KING JESUS so very much that I was so scared of leading beloved siblings astray if anything was a false vision or dream or word.

He promised me that it was a work written in my books and that He would use it for His GLORY and bless and help many. And just that it touched you, a great woman of God I have looked up to so much for the past 3 years reading words from you is making me tear up. We can trust our Heavenly Father and King.

You are too sweet. I just realized I spelled your name wrong. I took the spelling from the video. Your last name Rathburn? I can change it. Thank you for obeying the Lord and stepping out. I struggle with the same concerns. I would hate to share something I thought was from God and find out later it wasn’t and lead someone the wrong way. I had dreams in the past ( many years ago). I thought it was God but I wasn’t sure. I wasn’t really around anyone who operated in things like that and when I shared them with my family they really didn’t understand. I have been in churches that taught and operated in the gifts of the spirit but there wasn’t any real teaching on dreams and visions. I studied some of Perry Stone’s and Kenneth Hagin’s teachings on dreams and visions. The Lord spoke through me a few times using the gifts in the church. There was so much infighting and division in the “Spirit” filled churches I have been a part of I became discouraged. I went through a period of time where I drifted back off into the world☹️ and in 2015 I started receiving dreams and words again. At first I didn’t know what to make of it. I was back “in church” but certainly not a church that operated in the gifts. I’m a quite mostly shy person and I would probably have not shared what I was receiving, thinking it was just for me unless the Lord had given me a word through a dream. The word was technology. I spoke that word and then said I’m going to begin to show you thinks in technology and how I’m going to use you in technology. I knew that was the Lord speaking through me. I know very little about technology, more now than I did but after that dream I started going online and just reading different blogs, and it might have been a year later I came across Z3. I made some comments and shared some dreams. James got in touch with me and wanted to do a post. That’s how it started here. James has been a wonderful mentor to many of us and he has given us a platform to share. I definitely think God brought me to this site. God started dealing with me in 2015, the same period when he showed you he was waking people up. I had such a witness with that revelation. I am touched to know that you have read the words I have posted here. The Lord has shown me that as well, if what I share only touches one person, it is worth it. God loves that one person and he can do amazing things through those that are submitted to his call. I tried to find you on YouTube and Brighton but was unsuccessful. Do you have a link or maybe I’m not looking in the right place? It will help now that I realize the spelling of your last name was wrong. God bless you and I’m looking forward to more insights from heaven.❤️

Lol, the book is called “Good or GOD”