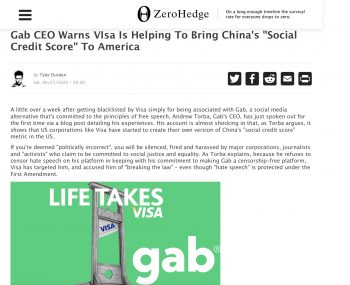 This article discusses how people have a social credit score from their social media data!

“According to a new report from cybersecurity experts Kaspersky, 32 percent of adults between 25 to 34 have had issues getting a mortgage or loan due to their social media activity. The denial of loans comes as part of ‘social scoring systems’ which are being used at an alarming rate by government and businesses to determine customers or citizens ‘trustworthiness.’….Kaspersky surveyed more than 10,000 people from 21 countries and found that 18 percent of those polled had issues accessing financial services because of assessments of their social media data.”

This article offers tips at the bottom of how to erase as much of your “digital footprint” as possible. Unfortunately there are few protections available currently when it comes to social media data.

Andrew Torba, CEO of Gab, “a social media alternative that’s committed to the principles of free speech”, shared his recent experiences on his blog which “shows that US corporations like Visa have started to create their own version of China’s ‘social credit score’ metric in the U.S.

If you’re deemed ‘politically incorrect’, you will be silenced, fired and harassed by major corporations, journalists and ‘activists’ who claim to be committed to social justice and equality. As Torba explains, because he refuses to censor hate speech on his platform in keeping with his commitment to making Gab a censorship-free platform, Visa has targeted him, and accused him of ‘breaking the law’ – even though ‘hate speech’ is protected under the First Amendment.”

Not only is the company (Gab) blacklisted by Visa but also Andrew as an individual and his wife.

“Christians need to be especially concerned and aware of this. The Communist revolutionaries taking over the United States are coming for us all. It’s only a matter of time before the Bible is labeled as ‘hate speech’ and churches start to experience what I am going through right now.”

A note on the visual with the guillotine: I found this disturbing and wondered if Andrew Torba used it to try to get Christians attention or if it being used as foreshadowing for the perilous times we all face with the Beast System rising…

Remember Agenda 21 was passed into Law by none other than Nancy Pelosi in 1992 I think it was as the RIO accords.
Another thing most don’t know she is a major shareholder in Visa Corp. was gifted stocks when the IPO went public.
So if VISA is involved, she is to, and goes along with the Agenda 21, now Agenda 2030, and I corrolate that with the Mark of the Beast System.
Let me also add, the MINT has quit producing Coinage. I’ve noticed signs popping up asking Customers to use Credit/Debit as to limited coins for change.
Now is the trying to force us into a new Money system or is it as some suggest President Trump is preparing to put us back on a Gold Standard. I don’t know which it is to be honest.
Just observations.

Hi sister EPG! The US has bought the system that China has been using for awhile now. They are going to implement it soon or maybe it is already here. Our nation is under judgment and it is going to get worse. People don’t understand that we are going to be under such surveillance that our freedom of movement and privacy no longer exist. They will also start to post pictures of the individuals for all the public to those they deem “politically incorrect, those with low social score, or who they deem individuals that need to be publicly humiliated.” I also think that goes in line with the ID 2020 that they are pushing hard for. The Lord have mercy on us! blessings sister!