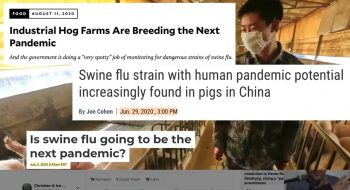 “The USDA has warned that ‘Super Pigs’ have arrived, and with them, myriad virus (including the G4 swine flu that threatens zoonotic transmission). Media has gone to town on this story — ensuring it reaches the collective conscious — but why? Could these superpigs be the vector by which a new disease might be delivered, ensuring that we re-engineer our food supply and end animal agriculture? Problem, reaction, famine: Christian breaks it down.”

For some time, Fauci & other public health officials have warned of zoonotic pathogens whereby humans will contract these by ingesting animals & thus becoming ill and/or dying. The Elites have actively been trying for years to curb meat and animal product consumption by pushing veganism and vegetarian “lifestyles”, telling people to think about the animals & the trauma we cause them, and publishing articles in their media outlets about health hazards from eating meat products and the contribution that cow flatulence added to “global warming” & then revised to “climate change”.

6 Million Super Pigs in the U.S. wrecking havoc to the tune of $2.5 B of crops and are getting violent. The USDA & multiple state & local media sources & international media outlets all parroting these same talking points about these diseased, super pigs on the heels of the swine flu being announced in Germany. There is an agenda at play behind this. That agenda is this food false flag, this looming event that will decimate the food supply & end animal agriculture which is their stated goal.

– Technocrats have a problem as people do not want to eat “upcycled” trashed & lab-grown meat (“clean meat” as opposed to natural “dirty meat”). $10 B “food replacement industry” with the stated goal of replacing the traditional methods of growing food

– Media has talked about next Pandemic is likely coming out of meat plant that will kill half of humanity. They continue to blame covid-19 coming out of a wet market in China.

– The vector (Super Pigs) has arrived & are likely to be used as the false flag to further push the control of the food supply to the Globalists and reduce animal agriculture eventually to zero in the future.

– The pigs supposedly harbor more than 30 viral & bacterial diseases including the coronavirus and many parasites.

– The media is telling us, “Everyone needs to worry about this”.

– These Super Pigs can accomplish all of the Globalists’ goals including shutting down farms & restoring biodiversity. UN & Fauci insists we are getting pandemics because of ranches & farming

– African swine fever has just been revealed in Germany. Germany is shutting down its agriculture & has put a planting & harvest ban on 33,000 hectares. One hundred eighty-three farms have shut down & the media has told us that they “expect it to spread rapidly” where they will shut down any farm where a dead pig is found.

– The technocrats want the masses to see the problem, i.e. the failure of the food supply, and then they use their problem-reaction-solution to force the masses to stop eating animal products and eat lab-created foods.

– The technocrats are “turning off the meat supply”.

– This narrative about the danger of a zoonotic infection to the masses using the media started BEFORE the COVID-19 situation.

WATCH for this FOOD FALSE FLAG to occur in the near future to deliver on the globalists’ narratives!

Be careful of becoming dependent on the globalists’ controlled systems as this is the END GOAL. Grow your own food & raise your own animals.

Now that you mention it, I notice they always seem to be overflow or out of pork products at the stores. I am even having trouble finding spam.

My, my; isn’t the Media busy doing what they do best, presenting for our “pleasure” yet more fodder with which to feed the folks into a frantic fear frenzy… (A mouthful there) To name but a few, we’ve had Murder Hornets, Bunny Ebola, who knows how any invasive species and now these hybrid hogs.

And I looked, and behold a pale horse: and his name that sat on him was Death, and Hell followed with him. And power was given unto them over the fourth part of the earth, to kill with sword, and with hunger, and with death, and with the BEASTS of the earth.

I’ve watched IAF for a while, recommend the channel. Very little fluff, everything reported is out of news articles from around the globe. To get a feel of where this is going, go back to his video about the Rockefeller foundation ‘Reset the Table’ agenda and watch forward from there. It’s accelerating fast from then, much like all the other chaos out of the old worn out bag of tricks from steal, kill, destroy. But God…!!!!!!