Unvaccinated Americans were the talking point of the day on Monday with a slew of figures slamming those who have chosen not to take the coronavirus jabs, assigning blame to them for America ‘going backwards’, likening them to murderers, and suggesting that they are to blame for more deadly variants of the virus emerging.

First up, the White House with Press Secretary Jen Psaki claiming that America is in reverse because “there are still a large population of people in this country who are unvaccinated – and we have the most transmissible variant that we’ve seen since the beginning of the pandemic that more people are getting sick with Covid.”

Fox News’ Peter Doocy: “On COVID, Dr. Fauci says we’re going in the wrong direction. Whose fault is that?”@PressSec: “Well, I would say first what he was referring to is the fact that because there are still a large population of people in this country who were unvaccinated…” pic.twitter.com/GzOULaVL54

Psaki announced that travel restrictions will not be lifted because of the Delta variant:

#BREAKING: White House Press Secretary Jen Psaki announces the U.S. will maintain all travel restrictions and NOT be lifting any of them anytime soon because of the Delta variant.

The Biden administration is continuing its policy of family separations #LoveIsNotTourism pic.twitter.com/cuOy6ZRsRR

She also declared that a return of the mask mandate is under consideration:

Jen Psaki: There is an “active discussion” to reinstate mask mandate on fully vaccinated Americans pic.twitter.com/CdpzEWAwYq

Finally, Psaki did not rule out applying restrictions only to unvaccinated people:

CNN’s Kaitlan Collins asks Jen Psaki if unvaccinated Americans should face penalties and be singled out as not able to live the same lives as the vaccinated: “Does the President favor restrictions for unvaccinated people when it comes to restaurants, museums, concerts?” pic.twitter.com/ubgMedQV2Z

Next up was Fauci, who appeared on his favourite softball network MSNBC to announce that unvaccinated Americans will be to blame for the next deadly variant:

CNN’s Lemon Don declared that the unvaccinated should be prevented from having normal lives. 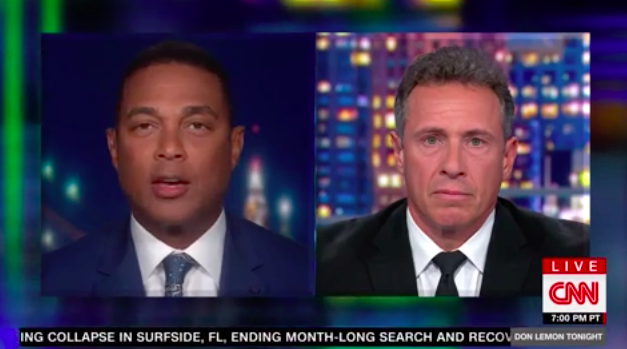 Meanwhile in New York, Cuomo’s brother proclaimed “we have to get in those communities, and we have to knock on those doors, and we have to convince people, and put them in a car and drive them and get that vaccine in their arm. That is the mission.”

NEW – NY Gov. Cuomo: “We have to knock on those doors, and we have to convince people, put them in cars & drive them and get that vaccine in their arm. That is the mission.”pic.twitter.com/nSIVsBuoPo

Finally, on the other side of the country, California governor Gavin Newsom likened unvaccinated Americans to murderous drunk drivers:

Newsom’s comments come after he announced that California will require proof of vaccination or weekly testing for all state workers and health care employees.

Your anti-vaccine lies are literally killing Americans. Your own supporters are following you off a cliff and into the ICU.

Come clean about vaccines — they save lives. https://t.co/pJjlzJ3TVJ

You’re one to talk, Gavin.

Your murderous ACTIONS as Governor of California literally killed people.

Paying $1,000/day to nursing homes to house #COVID19 patients with the most vulnerable people.

The message is clear, ‘we’re all in this together’… except for the unvaccinated.