Fox News commentator, Tucker Carlson, said pushing COVID vaccines on young people is “reckless” because we don’t know the long-term effects. “Anyone who claims to know is lying.” 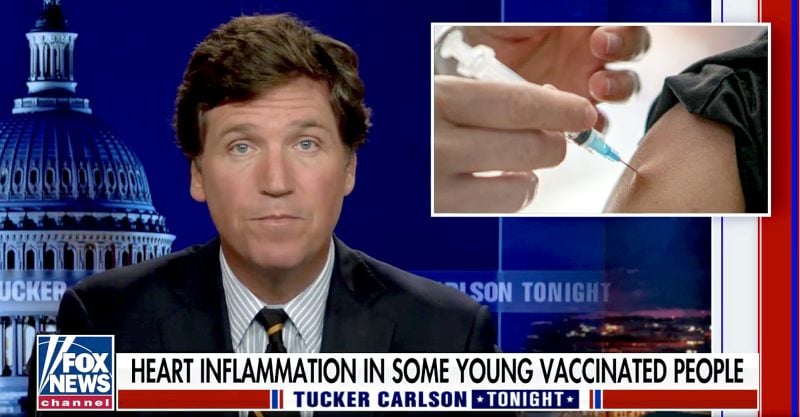 In the segment below on last night’s “Tucker Carlson Tonight,” Fox News commentator Tucker Carlson said up to 150,000 young Americans could “develop a potentially fatal heart disorder because of the COVID vaccine.”

Carlson cited a report from Israeli health officials that found a link between the Pfizer COVID vaccine and heart inflammation in young men — a side effect occurring at 25 times the usual rate.

Health authorities in Canada and Germany are noticing similar outcomes, Carlson said. “If statistical trends observed in Israel hold here,” said Carlson, a number of young Americans could be harmed.

“Given these numbers, it’s possible that healthy young people will be much more likely to be harmed by the vaccine, than by COVID itself. That would be a disaster. In fact, it would be the definition of a preventable disaster.”

Despite the reported adverse effects from the vaccines, many American colleges and universities are continuing to require students to get vaccinated upon returning to campus.

“There are close to 20 million college students in this country. In the end, most will have no choice but to take a drug other governments have concluded is dangerous for them to take.”

Thanks James
Excellent video from Tucker Carlson. He raises some very valid points. Forcing a vaccine on innocent students that is potentially life threatening is Wrong .given 99.5% will only have a mild illness should they get COVID 19:
Personal freedom to choose and full transparency on the side effects of these VAX poisons are critical, yet Biden and the US government don’t care.
Regards
Philip