What should be understood is that according to the WHO and the CDC the PCR test which is used to “detect” and “identify” SARS-CoV-2 and its variants is totally invalid.

Omicron has not been identified. Testing positive for Omicron using the PCR test (which has been used since November 26, when Omicron was first announced) is an impossibility.

The so-called estimates of “Test Positive for Omicron” for vaxxed indicate that vaccinated individuals are more likely to test PCR positive for two reasons.

According to figures released by the UK government via the Office for National Statistics, people who are triple vaxxed are 4.5 times more likely to test positive for Omicron than those who are unvaccinated.

The numbers also illustrate how the double-vaccinated are 2.3 times more likely to be infected with Omicron than those who haven’t taken any jabs.

The data, which is summarized by the Daily Sceptic’s Will Jones in this article, bolsters assertions that the Omicron variant is effective at evading vaccines.

“Note that this is the probability of an infection being Omicron given a person is infected, so it doesn’t tell us how likely a person is to test positive in the first place… This means it doesn’t tell us that the vaccines are making things worse overall, only that they are making it much more likely that a vaccinated person is infected with Omicron than another variant. In other words, it is a measure of how well Omicron evades the vaccines compared to Delta. The fact that the triple-vaccinated are much more likely to be infected with Omicron than the double-vaccinated confirms this vaccine evading ability.” 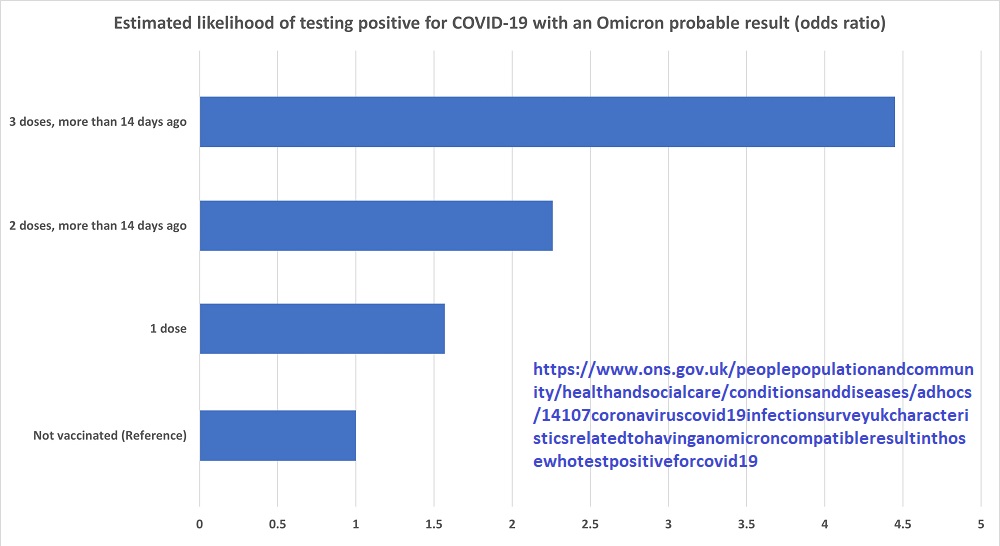 Jones concludes from the data that, “The current Omicron outbreak is largely an epidemic of the vaccinated and is being driven, not by the unvaccinated, but by those who have been double and triple jabbed.”

The numbers completely demolish claims that the Omicron outbreak is a ‘pandemic of the unvaccinated’.

As Will Jones also documents in this piece, claims that NHS hospitals are being overwhelmed by the unvaccinated aren’t backed by any actual evidence.

Despite this, over the weekend UK Health Secretary blasted unvaccinated people for taking up hospital beds, telling them they “must really think about the damage they are doing to society.”

UK scientists will today present evidence that the Omicron variant is milder than previous strains of COVID-19, something that health experts in South Africa have been saying for weeks.