You are here: Home » Prophecies » “The time for the garrison soldier is coming to an end. Now is the time when the field soldier is needed to fight the battle!” 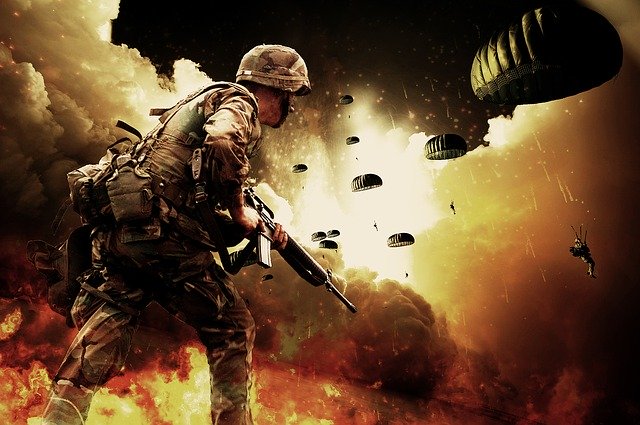 Several nights ago, my husband had a dream that he was at a Christian meeting where several well-known Christian ministers were seated on the platform at the front of a large audience. Most people would know these TV ministers, if I were to name them, so I won’t.

The main speaker, one of the ministers, was sad because the government in this country (USA) was coming after their ministry and trying to shut them down. The government had already shut down one of the other ministers ministries (which is large and influences not just THIS country, but the world!). As he was speaking, my husband was reminded of the quote, “First they came for the communists and I didn’t speak up…”, by Martin Niemöller, after WW2 (referring to Hitler).

As each of the speakers spoke, they were sad and seemingly so down, but then my husband suddenly stood up (in the dream) and the Spirit of God came over him, and he said, “The arm of flesh cannot do this! Not by might, not by power, but by My Spirit,” saith the Lord! He said itTHREE TIMES loudly, but the speakers were too disappointed to believe it!

As he thought about this, he felt God said to him, “The time for the garrison soldier is coming to an end. Now is the time when the field soldier is needed to fight the battle! This is a spiritual battle in which both sides are dealing with spiritual entities. This battle will NOT BE WON IN THE FLESH!”

Also, the Lord emphasized He wants to use whosoever will let Him use them. Some people aren’t going to like the ones whom God chooses to use, but God has His reasons. What matters is what God wants, not what people say! Field soldiers might not look pretty and they might have some baggage, but they fight to win and this is the key to winning the victory, never never, never give up!

Almost 20 years ago, the Lord explained His wisdom to my husband in how He picks various people for different positions. The Lord told him, “There are porcelain soldiers and there are iron soldiers, both meant to do different jobs.” So, we must STOP judging and condemning each other and putting each other down for each of us will be held accountable by our own master! We must now “close the ranks” by working together more than EVER before so we can accomplish God’s will on this earth!

Inspiring dream Sandra & I agree with all of it. We need to band together & I am seeing that same message from other watchpeople. This is NOT the time to be divided among the brethren. God wants His church strong to do battle in the days ahead. Time spent fighting amongst each other weakens the body of Christ & wouldn’t that time spent arguing back & forth be much better spent on winning souls to Christ? I think we all know the answer to that. Thank you for sharing this dream.

I’ve been feeling the same. People will need to give up there judgemental denominational views and truly seek the LORD. truly following the lead of HolySpirit.

Thanks Sandra for the sharing.

However, about judging (NOT condemning, though) our fellow believers, we definitely need more discernment & Leadership by the Holy Spirit. Let’s see the sharing from the Apostle Paul –

Now I beseech you, brethren, MARK them which cause divisions and offences contrary to the doctrine which ye have learned; and AVOID them. For they that are such serve not our Lord Jesus Christ, but their own belly; and by good words and fair speeches deceive the hearts of the simple. Romans 16:17-18 KJV

But now I have written unto you not to keep company, if any man that is called a brother be a fornicator, or covetous, or an idolator, or a railer, or a drunkard, or an extortioner; with such an one no not to eat. For what have I to do to judge them also that are without? do not ye judge them that are WITHIN? But them that are without God judgeth. Therefore PUT AWAY from among yourselves that wicked person. 1 Corinthians 5:11-13 KJV – and we know the ending result of such “Judging” in 2 Corinthians 2:6-11

Take heed that no man deceive you (Matthew 24:4)

Sometimes a main point is missed as we become focused on “rightly dividing the Word”.

The “divisions” alluded to in the main part by Sandra and her husband already exist. Many Soldiers of the Lord are overlooked in our churches today because of the baggage they carry … and the accreditation they don’t have!

I am reminded of an anecdote (a true testimonial) of a town drunk who went to a local church’s revivals year after year, always went forward, and always fell back because the members of that church could not forget that he had been the town drunk for so long. They expected him to fail. The traveling evangelist talked the pastor into hosting a “city-wide” revival, inviting any church that wanted to come to participate. Sure enough, the drunk came and came forward. This time, the evangelist introduced him to the pastor of another church, who took him under his wing (so to speak). The next year the former town drunk was one of the strongest workers in his church BECAUSE his past history — his baggage — was not held against him. Nobody expected him to fail.

Sometimes that seminary education is more hindrance than help.
Sometimes the school of hard knocks provides the better basis to help others.

Exactly. Redeemed “history” is His story in us and for the good of others.

Thank you for sharing this testimony. Was quite touched by it. Reminds me of Luke 7:41–43.

Sexually immoral, idolaters, adulterers, prostitutes, homosexuals, thieves, covetous, drunkards, slanderers, extortionists—such were some of us, yet now washed, sanctified, and justified the name of the Lord Jesus and in the Spirit of the Most High. What response can these who have been forgiven so much have but to love much the One in whose love is no record or memory of their wrongs or their past as such . . . ?