In May 2020, when I was fighting spiritual warfare for God, God showed me enclosed in a beautiful, transparent dome with a blue sheen. I understand that this is protective cover God gives to His saints. I can still fight and engage the world without obstruction, but the evil powers of the world were not able to attack me when I was encased in the protective shield of God.

The beautiful transparent dome with a blue sheen followed me when I walked. It felt light and refreshing as high mountain air and I hardly noticed it. But whenever an enemy tried to attack me, even from behind, the dome encased my surroundings like an invisible hard shield. As God made the spiritual covering, the material was strong and impenetrable to spiritual and physical enemies.

When I looked at my family, I saw that they too were encased in the dome of God. I did not see how they received the dome as it seems that they had done nothing in prayer warfare to receive it. I understood that out of the graciousness of His heart God provided similar protective covering to my family and assets when I was engaged in spiritual warfare for Him.

Over the next few months, God continued to use the analogy to help me understand more His protective modern-day ark. 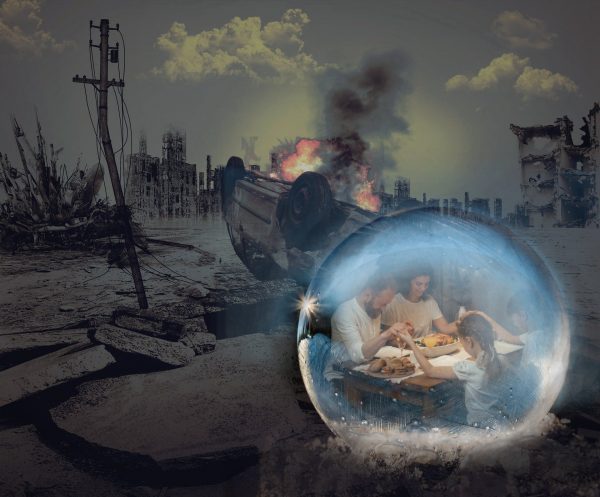 In Aug 2020, my vision opened with dark grey scenes of a world rapidly breaking down. On a smoky city street, I saw different groups of rioters, looters, police and protestors. Violent anarchy broke out on the streets. A car overturned with an arid smell of burning, sounds of horns blaring and sirens.

It was chaos as a violent, angry frenzy possessed some groups. They were besides themselves, emotional, violent and angry. I saw the faces of some civilians. They looked afraid and worried. I saw a father pull his teenage children to his side to protect them.

It was difficult to stay safe. There was confusion as one did not know where to go to be safer. Even those who thought they were safe in their own property encountered problems when some violent groups marched up to their doorstep and started harassment, trying to provoke retaliation.

God gently switched my perspective and I saw a Christian family. They were having dinner in their home. It was a peaceful and warm environment. I was surprised at the difference from the world outside. I saw them praying earnestly, saying grace. I saw that this family was enclosed in the protective dome of God that I described in my first vision. I knew that this dome was God’s protection for His own.

I had an experience with God’s protective bubble over 9/11 and it wasn’t a dream. I was stranded by myself in Atlanta and I needed to get back to my home in Seattle. All the airports were closed and I was paralyzed with terror at the thought of getting on a plane even if the airport opened. I couldn’t drive home because I was young, by myself and there was no GPS back then. I wanted someone to come get me and take me home, but of course there was no one. Out of desperation and without any expectations, I cried out to the Lord over and over again for hours “Lord, I can’t get home, please come get me.”

I woke up the next morning in His protective bubble. It was the most amazing peace and joy I can’t begin to describe. It wasn’t just within me, i could feel it all around me. I was completely enclosed. He led me step by step home from Atlanta to Seattle. I didn’t have to make any plans or worry about anything, each time I took one step I knew in my spirit what the immediate next step would be. I just stayed in His protective bubble of joy and peace and followed step by step as he led me. After I got home and had time to think about it and thank Him, I realized that this is how He is going to shelter His children through the tribulation. Even 19 years later I know I can go through anything, singing His praises as long as I’m in his protective bubble of indescribable peace and joy.

Thanks for this inspiring story, Vicki. I think it resonates with many because there has been times when we felt scared or alone but after praying hard, praying through, we are suddenly imbued with supernatural peace and strength what to do next that carries us through that crisis situation.

I am glad to see people comment on domes of protection. My heart has felt that seniors and older people with children will be thrust into chaotic lives SUDDENLY. I have been looking for property in which they perhaps will be led. In preparation for funds I put my tips and more money into cryptos for A few years (which cryptopia seems to have lost). I truly thought I was being obedient. …Well I was led to sell home and worldly THINGS and start my travels in search of property. I get frustrated at times and cheap property that would allow a community such as displaced ones would be in the desert in AZ. I’m used to trees and haven’t gone to look at it yet( next month I will) I told the Lord we could be seen without trees for cover and there is lack of water. He reminded me of seeing (in my mind) a community covered in a some of HUGE angel wings lots of angels wing to wing they either let light in or were radiating it . Food could grow too. Then reminded me he can make water flow in the desert from a rock. Now i’m willing now to go LOOK at what is in the budget!!! I also bought some PM and an old rv. With money from house. If PM goes up . Good. Was also led to go back to coinbase ( which I surprisingly had 2 litecoin on , and was led to buy $900 in xrp. I don’t even watch cryptos after cryptopia experience.

Thanks for sharing Linda. I like the part where you spoke about angels and their wings either let light in or were radiating it. I have seen angels dispatched by God to help people in need too. I am glad to hear that God has called you to prepare a safe sanctuary and your journey.

God has shown me different versions of this type of protection for many years. It is the true rapture. His remnant will not escape the world but be protected in it. Darkness and evil will be all around us but we will walk in total peace and Glory.

Agree with what you said about different versions of this protection as I have seen another form of it too. Thanks Rachel, for your add on.

Ever since I was a little child, The LORD has shown me protective domes very similar to what you are describing over me and my family and over our house as we slept. Shalom

It makes sense because Its just like the dome (firmament) God placed over the earth to protect his creation.

Also reminds me of the iron-dome air defense system used by Israel today.

Thanks Joel for sharing your confirmation. I am so glad that God provided this protection over you, your family and your house. He is a God who neither slumbers nor sleeps. Psalms 121:3-4.

I think I saw something similar. It was one night I dreamed I heard a storm outside tearing everything up. Things were flying and hitting and the noise was horrible. I went toward the window to part the blinds to see out when I was pulled away. I was gently sat on the bed and my torso lay down. My feet hung off the bed. I felt a covering come over me. I fought to get up. I said I have to make sure everybody in my household is safe. In my minds eye I saw the youngest grandson we are raising asleep in bed beside me and he was covered with the comforter. The next morning I felt so sad that I was not prepared for what was coming so that I could fight off what held me down. On the way to take the grandchildren to school I felt the gentleness of the Lord come over me and knew it was not the adversary taking over me but it was the Lords protection over me and the household in the storm. I’ve had a few dreams over five years of His protection in different circumstances and how He will do it. He is so amazing. A sister and I went through a rough time yesterday with somebody and I knew everything happening had a reason and I just needed to be silent. The sister fretted and struggled with it. The sister was awakened this morning to the Lords words. Stop trying to be God and let me be God. As in be still and know that I am God. There is a reason for everything happening. God is in control even when things seem so out of control. Look up and trust Him in your day. Be silent and let Him do His job. It’s a job He loves.

Thanks Donna for your sharing of personal story. Yes, God’s protection feels gentle and a supernatural peace but with tremendous power. 🙂 I hope that you will feel even more clearly of it in future

The Lord has recently spoken to me about being a “Noah” and that how every believer would be solely responsible for their own family’s provision and protection (both spiritually and physically) just as he was while preaching repentance to the world. Also, there has been incessant heavy rain where I live and is forecasted to do so for the next few weeks. Thank you for this confirming word!

Thanks brother S. Peter! Glad that God told you to be a Noah. Glad that this post spoke to you. Yes, in my area it also rained incessantly during 1 Jan and 2 Jan non stop when it normally doesn’t. God bless you and your family, Happy New Year!

This is a beautiful visual to me. As a mother, I would prefer if something has to happen with negative consequences, it happen to me – not my children.

I love the idea of this protective shield encasing my family when I am engaged in spiritual warfare, being bold for God &/or taking a public (& in my case loud ??) stand for Christ & Christian beliefs.

Thank you VAS Alliance. ?. Happy New Year to you.

Glad that it spoke to you, Expal Gal. I have noticed your posts and bravery. You and I posted complementary topics today. From Elizabeth Marie’s vision you shared, it’s timely to go into the ark of God. God bless you and your family, sister Expat Gal. Happy New Year!