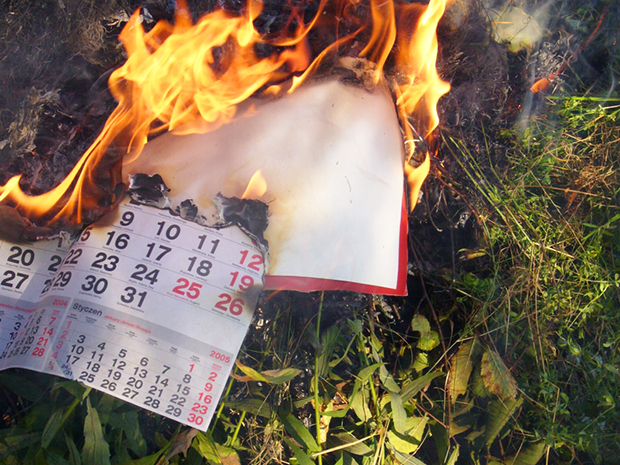 I had an encounter with the Lord over the past few days and I heard the Lord speaking over the Church and He spoke “Throw your calendar in the fire.”

I began to see people running towards the Lord and they were throwing their calendars in the fire. The atmosphere resounded so deeply of surrender of ‘what things should look like’ and even what ‘2020’ should look like. It was a deep place of surrender to Him to allow Him to bring forth change in this year that He desires. It was the place where fear was being surrendered to Him, control was being surrendered and as this place of surrender was taking place the scene shifted and I saw a HUGE sunrise. It was HUGE. The scene heralded “NEW DAY”. I watched in this vision as the sun began to rise on a “NEW DAY” upon the Church. I then began to hear the words being declared loudly, “THE SON IS RISING”

The Lord is calling His people to a fresh place of surrender of even what things are going to look like “from here on”. The shaking that is taking place in the earth has begun to confront areas of control and fear in the hearts of people, and in those places the Lord is bringing deliverance and healing.

When I had this encounter with the Lord regarding ‘calendars’ what stood out to me was the place of surrender before Him of time and ‘how we think things should look’ and I then began to see people scrambling back after this SELAH to try and ‘gain time lost’, ‘gain ground lost’ and to gather momentum again and to go back to ‘building what was’.

The Lord showed me that there will be a temptation coming out of this SELAH moment to move into assumption and presumption.

ASSUMPTION: a thing that is accepted as true or as certain to happen, without proof. the action of taking on power or responsibility. (Google)

PRESUMPTION: an idea that is taken to be true on the basis of probability. behaviour perceived as arrogant, disrespectful, and transgressing the limits of what is permitted or appropriate. (Google)

Am I saying that everyone needs to go forward from here and cancel their plans for 2020? No, what I am saying is that the Lord is challenging areas of control.

“What if things don’t look as you thought from here on out for the rest of 2020? What if I want to change and shift some more things around?”

The Lord showed me that one of the heralding calls from His heart right now is to lay down ‘calendars’ and ‘agendas’ and really seek His heart for what His way forward looks like from this point on.

There are structures and ‘ways things have been done’ in the Church that are being shaken right now and the Lord is inviting us higher. “Church” and “The Church” is going to look VERY different in this new era and if we as the body of Christ move in assumption and presumption that we move out of this SELAH and go back to ‘life as normal’ then I believe we are in a dangerous place, because things are not going back to ‘normal’, there is a NEW normal and God is wanting to rearrange and shift things. Those that have ears to hear and eyes to see will see the changes that are upon the Church and the changes and new wineskin that are upon us, they will hear the sound and move forward.

It is a new day and it requires humility in moving forward. (Micah 6:8) Coming out of this SELAH time some of the ‘directions’ the Lord is going to lead may expose pride in the heart, it may expose fear in the heart, but the Lord is inviting His people to the threshing floor. To lay down pride, agenda, and the call to humility and surrender before Him is SO important right now to be positioned and carry what is ahead.

I implore you as a fellow believer, truly seek the Lord for what HIS heart and HIS plans are after this divine SELAH moment. He is moving the Church into such a new day that it requires His people walking so close to Him, so close to His heart and hearing His heartbeat. There’s a new rhythm, a new sound that is arising. Things are changing and we must be people that lay our calendars and agendas at His feet daily.

God is wanting control of calendars in the lives of many and in the place of surrendering the calendar, “God rearrange my year, shift, change anything you need to.” That place of surrender is actually moving His people into some of the greatest opportunities, doors, promotion and move of His Spirit.

We must as His people embrace the warning from the Lord in coming out of this SELAH moment whenever that happens, to not move out in presumption and assumption but to walk out led by the Spirit of God.

There will be things God will say to let go of, walk away from, dismantle and it will challenge fear, fear of man, and see a deeper call to obedience to Him placed upon many, but in that place, there will be a beautiful positioning to catch the new wave of His Spirit and His wind and move into significant promotion.

Let us not hold tightly to calendars, agendas or ‘how we think things should look’ for the rest of this year. Let us lay down before Him in surrender and allow Him to do what He needs to do in shifting and rearranging if that is what is needed and lead us into the huge promised lands before us.

The King of Glory is coming (Psalm 24:7-9) and He’s looking for those who are truly laid down, those who truly love Him and love Him more than their calendars.

Yes yes thank you Lana for sharing! I feel led to share this scripture in regards to what Lana said here. Deuteronomy 8… For the Lord your God is bringing you into a good land….when you have eaten and are full….beware that you do not forget the Lord your God….lest when you have eaten and are full… Your minds and hearts be lifted up and you forget the Lord your God, who brought you out of the land of Egypt, out of the house of bondage….beware lest you say in your mind and heart, my power and the might of my hand have gotten me this wealth… Earnestly remember the Lord your God, for it is He who gives you power to get wealth, that He may establish His covenant.
The Lord is giving us the opportunity to get out of Egypt in every way, a grace unto full surrender at the deepest level unto us no longer living as Paul was able to say! The way of life is different, let us not look to go back to the ways of life that are carnal and made of man that God is working to tear down! Thanks again

https://www.youtube.com/watch?v=lRpAm6HMHI8
Because Jesus Lives, I Can Face Tomorrow || Prayers for Covid-19, on the streets of Brazil
powerful message

Amen and Amen. Thank you Jesus! Yes Lord, we surrender to You. Thank you Father!

Lana Vawser’s messages are so right on the mark, it’s amazing! Thank you James for posting them!