Thousands of people protested against mandatory vaccinations and other measures imposed by the Greek government to  tackle the pandemic in Athens, Thessaloniki and other cities around Greece on Wednesday.

Alongside the around 4,000 that turned out in front of the Greek Parliament in Athens, police said several hundred people also took to the streets in the cities of Thessaloniki, Ioannina and Heraklion for the same reason. 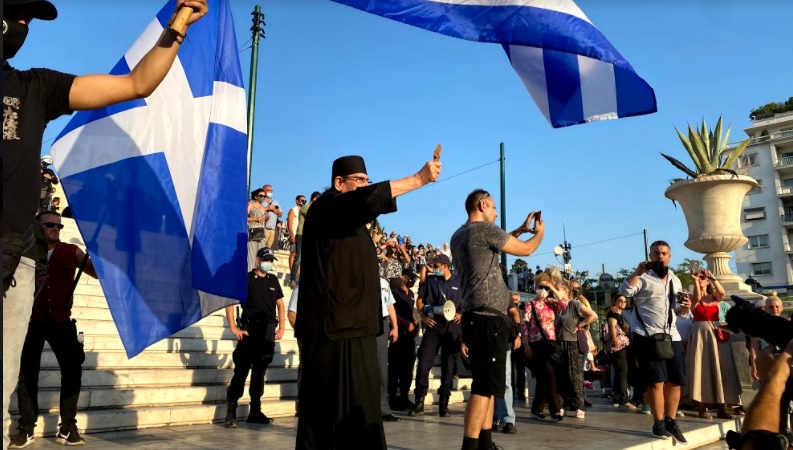 These were the largest demonstrations in Greece against mandatory vaccination, state radio reported.

The demonstrations followed the Greek government’s announcement recently that only vaccinated people would be allowed to eat inside at restaurants and to enter cultural institutions.

Immune-only venues and spaces in Greece will be only for those who have been fully vaccinated or have immunity through having had the virus in the last six months.

Everyone must also have the corresponding certificate to prove their status to gain access to the venues. The plan also allows for “mixed” venues which also grant access to the unvaccinated — but only if they have a negative a rapid or PCR test for Covid.

The measures can apply to either indoor areas or open spaces that are likely to be crowded. 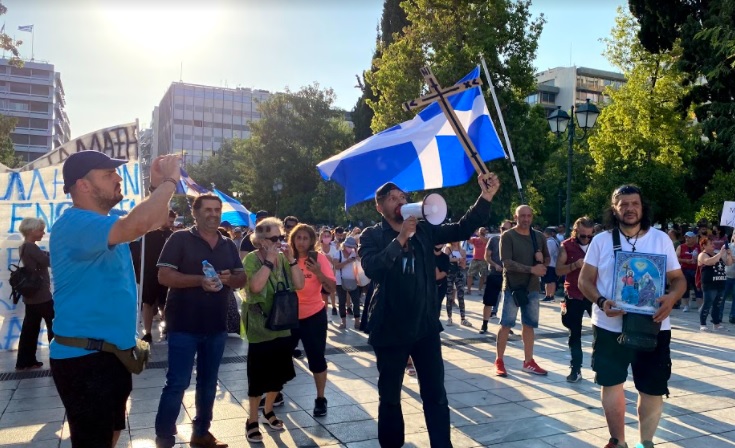 Carers and health care workers will also require vaccination under the new rules, with those refusing facing dismissal.

Compulsory vaccination will also apply to those serving in the armed forces, including conscripts. 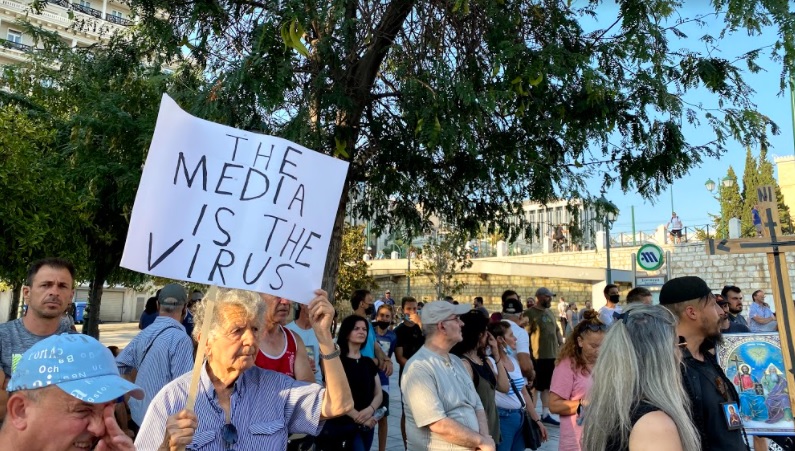 An elderly holding a banner attends the protest against mandatory vaccination in Greece. Credit: Greek Reporter

Protestors in Greece defend right not to vaccinate

Demonstrators complained that people who refuse to vaccinate for different reasons were having an increasingly difficult time, and that they should retain the right not to be vaccinated.

Although they are a minority in Greece according to several recent opinion polls, analysts say that their movement could grow, undermining the authorities’ efforts to vaccinate more Greeks.

The number of new infections in Greece has skyrocketed in the past ten days following the relaxation of pandemic restrictions. Daily coronavirus cases remained elevated on Wednesday, as 2,938 total cases were recorded across the country.

The current figure marks 171 fewer instances of the virus than the 3,109 cases that had been recorded on Tuesday, which marked the first time since early May that the country’s daily cases topped 3,000.

Coronavirus experts believe that nightlife and partying teenagers are largely responsible for the rise.

Health authorities on Wednesday reiterated that Greece is in the midst of a fourth Covid-19 pandemic wave. In addition to the rising infection rate, the transmissibility index of the virus has also spiked sharply, as well as the percentage of positive tests.

Experts expect the wave to spread further with several thousand cases on a daily basis in August, which, although currently affecting a large percentage of young people, may also affect those who have not been vaccinated over the age of 50.

“The epidemic will escalate quickly and abruptly,” warned Nikos Sipsas, an infectious diseases professor at Athens University, adding that the fourth wave may peak between the middle and end of August.

“Of course I cannot make predictions but we are talking about many thousands of cases,” he said, noting that in August “we could see more than 10,000 cases a day.”