You are here: Home » News » Jesuit Schemes by Nation » India » ‘The Truth of COVID-19 – The India Statement’: Citizens and Experts Call for a Halt to COVID-19 Vaccine Rollout in India

The mass rollout of COVID-19 vaccines should be halted immediately. These experimental vaccines pose serious dangers. That is the message contained in a statement from concerned citizens soon to be forwarded to India’s Prime Minister Narendra Modi.

Concerned citizens of India can sign on to the ‘The Truth of COVID-19 – The India Statement’ prior to its dispatch to the PM.

Part one is a five-page summary of the main points and recommendations.

This is supported by part two, a 62-page document which quotes the relevant literature and has dozens of references to back up the assertions made about the vaccines, COVID-19 and the vaccination program.

Some of the key points and recommendations contained in part one are summarized below.

The statement begins by saying that a coronavirus vaccine has never before been used successfully. One problem has been the development of antibody disease enhancement (ADE). The vaccine produces antibodies, but sometimes this does not prevent disease – it instead makes the disease more serious and ADE can extend into the future (this has been seen before, for example regarding the rollout of a Dengue vaccine in Manila).

All the vaccines use the spike protein and this was thought to be a good idea at first because the virus uses its spike protein to attach to the host cells. But the statement notes this is a blunder and a major catastrophe.

The spike protein is the toxic part of the virus that causes major (vascular) disease. It is now confirmed that the synthetic spike protein of the vaccines is also toxic and is similarly causing the likes of clotting and bleeding disorders.

Many thousands of people taking the vaccine have died.

The vaccine leaves the injection site in the arm and, contrary to what was assumed, travels into the bloodstream, spreading all over the body including with concentrations in the ovaries, bone marrow and lymph nodes.

Moreover, the mass rollout of the vaccines is putting selection pressure on the virus to evolve into strains that are resistant to the vaccine, like Delta and Omicron. This is well known science that follows the same pattern as, for example, in anti-biotic resistance. Dr Luc Montagnier, the Nobel Prize winner who discovered the AIDs virus, has raised an urgent warning about this phenomenon. The statement notes that this process of new variants will not stop as more and more people get vaccinated.

Data from Israel (where the vast majority are vaccinated) show an increase in hospitalizations and deaths among the vaccinated. This is a repeated pattern occurring in other countries and was predicted by Dr Montagnier and other leading virologists.

The protective effect of the vaccines is also waning and is now below the required regulatory efficacy of at least 50%. The US health agencies are already advising a booster third dose. However, leading vaccine experts and immunologists and the vaccine manufacturers knew this all along. It was hidden though from the public.

It is clear that people who recover from Covid-19 develop natural immunity, which is long lasting with antibodies that are effective against several viruses or variants. A large percentage of the Indian population, around 70% or more, already have this natural immunity. The statement concludes that vaccines are therefore not required.

As the vaccines can produce antibodies to a protein, syncytin, which, in the future, may cause abortions in women, the assertion is that women of child-bearing age (50 and below) should not be given the vaccines.

The statement notes that children have not had much problem with Covid, but some doctors are suggesting that a third wave will affect them. This is based on speculation, not science. Moreover, the long-term impacts of these vaccines and in particular the toxic spike protein are unknown. It would thus be quite unconscionable to risk the future of children. Given the data, it is clear that the risks of Covid-19 vaccines far outweigh the benefits for children.

India has a major disease burden in terms of communicable diseases, (TB, diarrhoeal, etc) and children are seriously impacted (more than 2,000 children die every day). On the other hand, the incidence and deaths due to COVID-19 are negligible. Children are not impacted by this disease.

In India, levels of serious malnutrition are worrying (and the COVID-related lockdown of the country can only have exacerbated this). According to the statement, stopping unneeded vaccinations would release the huge sum of Rs 35,000 crores (almost 4.1 billion euros) for a public health system in dire need of resources to deal with killer childhood diseases and for improving the health of the population.

The statement notes that at the very heart of the problem of unsafe vaccines is the endemic conflict of interest that engulfs the institutions of health worldwide, not least in the US (NIA/FDA/CDC) the UK (MHRA) and the WHO.

It is for all the reasons mentioned above that vaccine manufacturers demand to be indemnified from any harm their vaccines may cause. Pfizer and Israel have made an agreement to hide Covid-19 vaccine adverse reactions for 10 years. Yet, these adverse effects are key to understanding vaccine science.

The statement also says that routine RT-PCR testing as presently conducted, including on asymptomatic cases, should be discontinued. PCR-driven ‘cases’ mislead the public on Covid infections. Furthermore, it is clear that the vaccines have failed to provide immunity and also fail to stop transmission from those vaccinated. India has acquired ‘herd immunity’ and does not need these vaccines. Medical science therefore does not support their continued rollout.

“India must stop the vaccines with immediate effect… Preventive measures, early treatment and treatment protocols through all the stages of the diseases with Ivermectin and other off-label drugs are proven… very early on, India took exemplary action with regard to the ICMR [Indian Council of Medical Research] guideline on HDQ (hydroxychloroquine) and UP state with its public health measure of dispensing Ivermectin, which was an acknowledged success. We need to widen these measures across India. Both are ‘repurposed’ drugs, are medically proven and safe solutions, and there are others in our toolkit of medical products, along with vitamins (D, C and zinc).”

The PM will be urged to implement the recommendations set out in the statement and these will be at a fraction of the cost of vaccines. The funds released will allow the government to invest in overall health infrastructure (children’s health in particular), the economy, farmers and agriculture and the environment.

Nigeria bulldozed over a million doses of donated AstraZeneca COVID-19 vaccines that had expired to show its people that the vaccines would not be used in the country.

(I did not attach the link, because it doesn’t open properly)

Indian vaccination is in critical phase. Certain opposition ruled states are pressuring Prime Minister Modi for approving booster shots which he is countering by adhering to WHO guidelines which urges nations to complete double vaccinations before thinking of booster. They are also urging him to approve children’s vaccines. Unless majority of people come forward opposing vaccines, he is in a tight spot. Blessed to have him as our Prime Minister at this critical juncture. We thank God for giving such a patriot as our Prime Minister. Unless this fraud exposed and destroyed completely in US, don’t think he will be able to withstand the pressure for further jabs. But one thing sure, like Israel, Indian vaccine damages will be minimum.

When the Health Department team arrived at the Sisoda village in Uttar Pradesh to vaccinate them, the villagers ran to the shore. When the team surrounded them at the shore almost 200 villagers jumped into the river Saryu to escape forceful COVID-19 vaccination.

May 2021 – “Hundreds of bodies found buried along Indian riverbanks”

https://www.ctvnews.ca/health/coronavirus/hundreds-of-bodies-found-buried-along-indian-riverbanks-1.5429980
_____
(During this time period:
India, with the world’s biggest vaccine making capacity, has partially or fully immunised only 9.5% of its 1.35 billion people, according to data from the government’s Co-Win portal)

Skim through the pages of this News Paper article from 2011, take a good look at the first page of the hand of the person holding the Vaccine bottle & also… how “911” stands out on the first page too. 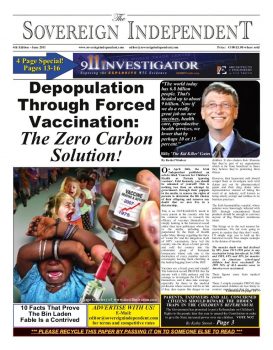 A viral message on Facebook claims that hundreds of doctors had sued Microsoft co-founder Bill Gates after a polio vaccine he had funded left over 47,000 children in India disabled, leading to his expulsion from the country.
_____
Claim: Bill and Melinda Gates Foundation had tested polio vaccine in India between 2000 & 2017 and had paralysed 496,000 children.

According to a report by PolitiFact, the claim can be traced back to an Instagram post by Robert F. Kennedy Jr., a leader of the World Mercury Project on April 7. World Mercury Project, a group headed by Robert F. Kennedy Jr. and a California-based organization has been vocal against vaccines. Further, they are one of the biggest sources of anti-vaccine advertisements on Facebook. 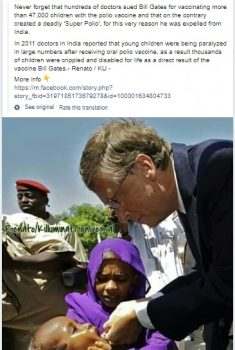