You are here: Home » News » Jesuit Agendas » Health Care News » Vaccines » VAERS Reporting System » The big elephant in the vaccination room that nobody’s talking about is VAERS.
Share this post: 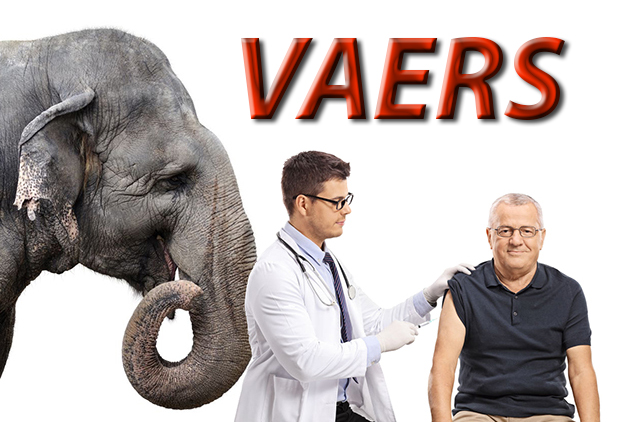 Two independent research studies have made similar discoveries exposing VAERS as the elephant in the vaccination room that nobody’s talking about. This post presents their findings in the hopes that we can finally escort this big fatty outside where he belongs.

Since 1990, the Center for Disease Control (CDC) along with government agencies like the FDA and Department of Health and Human Services and the entire scientific and medical communities have relied on the Vaccine Adverse Event Reporting System (VAERS) to determine the safety of vaccines, but from the beginning, VAERS has had a well known problem of under-reporting the number of adverse reactions.

The CDC has publicly acknowledged this problem, as quoted below from their website:

“VAERS is a passive surveillance system: reports of events are voluntarily submitted by those who experience them, their caregivers, or others. Passive surveillance systems (e.g., VAERS) are subject to multiple limitations, including underreporting, reporting of temporal associations or unconfirmed diagnosis, and lack of denominator data and unbiased comparison groups.” (Source: cdc.gov)

Likewise, the FDA has made similar statements, as shown here:

“Former FDA commissioner David A. Kessler has estimated that VAERS reports currently represent only a fraction of the serious adverse events.”

Since reporting to VAERS is completely voluntary, it makes sense the real numbers would be much larger than what’s reported for the following reasons.

First, most of us have never even heard of VAERS so we wouldn’t even think about reporting to them. And the reason why we haven’t heard about them is because the mainstream news media avoids mentioning them as part of their campaign to downplay any dangers associated with vaccines. “Just doing my job mam.”

Second, even if patients know about VAERS, they often don’t report their adverse reactions because they don’t connect them to the vaccine. Again, the mainstream news media has done a fine job of indoctrinating us with endless claims that vaccines are totally safe. More recently with COVID-19, they’ve taken it a step further by slandering anyone sharing scientific facts as conspiracy nut cases. Who needs science when we can have vaccine religion?

Third, even if clinicians are aware of VAERS, they’re not obligated to fill out VAERS reports, nor are they penalized for avoiding this extra work, so it’s not part of their usual workflow and often doesn’t happen.

Actually, these same reasons make VAERS the perfect reporting system for Big Pharma vaccine manufacturers because under reporting adverse reactions helps them sell more of their products. So maybe we should stop complaining and just buy their stock? And look at the bright side, thanks to our adverse reactions, we now have more time to sit in front of the TV for another indoctrination course on vaccine safety.

It’s great to see the CDC and FDA admitting VAERS has a problem, but it’s been in place now for 31 years, so do we still call that progress? And somehow they forgot to mention anything about the size of the under reporting problem, which seems kind of important, but thanks to the findings from two research studies presented below, we now know the size.

If we were playing Jeopardy, these would come under the category, “Things the CDC and FDA don’t want to talk about.”

The first study presented here was published recently, March 8, 2021, showing adverse reactions to COVID-19 injections are at least 80 times higher than what’s reported to VAERS. I think that qualifies as a big elephant. The study is called “Acute Allergic Reactions to mRNA COVID-19 Vaccines” and it was conducted by a Boston-based non-profit hospital and physicians network called Mass General Brigham (MGB).

The study focused on acute allergic reactions within three days of receiving the first dose of the COVID-19 injections based on a sample of 64,900 participants, all MGB employees. For 3 days after getting injected, participants completed symptom surveys through a multi-pronged approach including email, text message, phone, and smartphone application links. Of the 52,805 (81%) participants who actually completed the symptom survey, 1365 experienced acute allergic reactions, which was defined as two or more of the following symptoms: itching, rash, hives, swelling, and/or respiratory symptoms.

I used the following calculations to show adverse reactions identified by MGB are at least 80 times bigger than VAERS:

Although these findings might sound hard to believe, it’s amazingly close to the findings of a 2011 research study conducted by Harvard Pilgrim Health Care Inc. Recognizing the persistent problem with VAERS under-reporting adverse events, the Department of Health and Human Services authorized a $1 million grant to Harvard Pilgrim Health Inc to identify how different the results would be using an active rather than a passive reporting system. So Harvard Pilgrim conducted a three-year study in which they created a proactive, reliable, automated system, called ESP:VAERS, which relies on electronic health records (EHR) data to detect and securely report adverse events rather than relying on patients to voluntarily report their adverse events.

The ESP:VAERS system studied the results of 1.4 million doses of 45 different vaccines given to 376,452 people. Every patient receiving a vaccine was automatically identified, and for the next 30 days, their health care diagnostic codes, laboratory tests, and medication prescriptions are evaluated for values suggestive of an adverse vaccine event. The results showed 35,570 adverse events, which is 2.54% of total vaccines, which is almost identical to the 2.555% identified in the MGB study.

If Dr. Fauci was here, he could explain how two independent studies with almost identical findings was purely “coincidental”, but since I don’t have any scientific training, it sounds important to me.

Even though the MGB study focused exclusively on COVID-19 injections and the Harvard Pilgrim study focused on other vaccines (since it was done prior to COVID-19), their findings were similar because both compared systems that actively captured 100% of vaccine recipients with passive VAERS data. So they both arrived at the same conclusion, showing VAERS is a seriously inadequate system that grossly under reports adverse reactions.

The Harvard Pilgrim team summarized their general conclusions as follows:

With the COVID-19 shots being increasingly mandated around the world, this elephant has already done lots of damage, as shown by the following VAERS data, even as under reported as it is, showing alarmingly large numbers of adverse reactions through April 23, 2021:

Even though the VAERS numbers are tiny in comparison to the real numbers, the news media still refuses to report them, but since the actual numbers are so large, they’ve been forced to do damage control to avoid losing all credibility, so they’ve arrived at conclusions that make no sense at all, which often happens when people are lying. For example, they claim less severe adverse reactions are a good sign indicating the shots are effective but more severe reactions, like death, heart attacks, blood clots and aneurysms, are completely “coincidental” and unrelated to the shots. I don’t know which is more amazing, the absurdity of their logic or the fact that millions of people believe them.

Even more troubling than VAERS underreporting is the fact that nothing is being done to fix it. It’s been ten years since Harvard Pilgrim completed their study in 2011, plenty of time to make changes. The system they designed solved all the VAERS problems and was offered to the CDC on a silver platter. According to their final report, the only thing left for the CDC to do was link the VAERS system to the Harvard Pilgrim system in order to transmit the data. The Harvard Pilgrim team requested that the CDC do this, but the CDC refused to even reply.

“However, real data transmissions of non-physician approved reports to the CDC was unable to commence, as by the end of this project, the CDC had yet to respond to multiple requests to partner for this activity.”

“Unfortunately, there was never an opportunity to perform system performance assessments because the necessary CDC contacts were no longer available and the CDC consultants responsible for receiving data were no longer responsive to our multiple requests to proceed with testing and evaluation.”

Sure sounds to me like something foul is going on at the CDC, but I keep forgetting we’re not allowed to say things like that anymore. Note to self: “They’re the good guys because they’re from the government. We’re the bad guys because we think the facts matter.” Repeat twice daily, or as needed…

I also found it amazing that the MGB study didn’t even attempt to compare their findings to VAERS data, even though that was their most valuable discovery by far. I think that disconnect shows how much things have changed in the past ten years and especially in the past two years as the medical and scientific communities are now suffering from a severe case of “vaccine reluctance”, but not the way Dr. Fauci defines it. They’re reluctant to ask the wrong questions or draw the wrong conclusions because they could lose their jobs.

Welcome to Fantasy Island where the inmates are running the asylum.

Elephant? What elephant? I don’t see any elephants. Wait a second, are you one of those nut cases I’ve heard about? Guards! Guards! We’ve got another one here!

Hey James – Thrilled to see this post so I can add in two relevant points about VAERS without having to make a new post.

1) Del Bigtree interviewed 3 health care women medically incapacitated by “COVID vaccinations” and NONE of these medical health workers knew about VAERS before they received the vaccinations! These are women working day in & day out in health care. Health care workers are not told about VAERS & are not telling their patients so the masses do not know this database exists.

2) In this video, this man shows that the VAERS is manipulating the data by witholding hundreds of thousands of reports and then “leaking” these into the database at strange times….. https://brandnewtube.com/watch/vaers-bombshell-hhs-withholding-100s-of-thousands-of-reported-adverse-events_mPa6j6bXJVpAFEq.html.

Wow, those are some great points. Thanks for sharing. I’ll be watching the video.

… I appreciate all the articles I’ve read on this site. And I know you wrote one on why you didn’t think it was the mark of the beast. I was checking out something on you tube earlier and I read a comment that I think was very poinient. The commenter. And if I could remember their name I’d give them full credit… Said. They thought the vax was the abomination that causes desolation. Definitely made me go hmmm. We are the temple not made by hands… Setting ourselves up with science and technology as God’s. Tampering with DNA. Gene therapy.

The scriptures give details about the abomination that brings desolation so we can safely conclude it is not referring to COVID-19 injections.

I’m glad you shared that LoriQ because studying the history of vaccines has helped me realize this same thing is happening to millions of people but we’re not connecting it to the vaccines. I’ll be sharing more about this in upcoming posts. I think you made a wise decision by avoiding any more vaccines.

I had not heard about that but it would not surprise me considering the history of the evil Jesuits orchestrating these things as confirmed by decades of annual reports from the Rockefeller Foundation.

Thanks for teaching us about these 2 independent studies! Very helpful….and your last paragraph was soo funny. Loved it!

Hi to the lady in Perth,

I bought Ivermection thru INDIAMART

https://www.nibahealthcare.com/
cost about $95 as minimum transfer charge thru my Bank Account.